The field next door has been ploughed for the first time since I moved in, seven years ago. It's somewhat dramatic, but I do like a nice spread of tidy earth.

The time has come to sort the vegetable patch, depending on the weather of course.  One of the small crops of potatoes I planted in the Spring were Pink fir Apples. I first came across these many years ago in Waitrose (not my usual shopping habitat, but it is good for wandering round, window shopping).  They were rather expensive for my budget, but I bought some, as I liked the quirky shapes. They were quite delicious and I've tried growing them twice since, with limited success as they never grew to anything much. 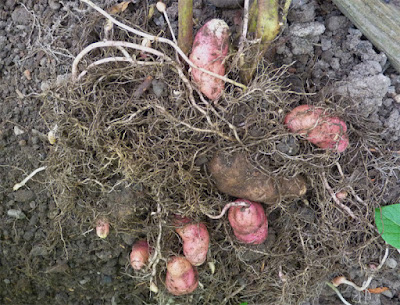 However, I gave them another go this year and we had an initial dig in July. Again, I was disappointed with the size. Three plants gave us this amount of tubers, which when washed, looked alarming like baby rats. They were excellent though, steamed and buttered.

Before I gave up on Pink fir Apples once and for all, I did a web search for tips. and discovered to my surprise, that they were not, as I had always presumed, 'earlies', (summer croppers) but one of the longest growing main crop potatoes, needing at least two months more in the ground before harvesting. So we left them. And waited. 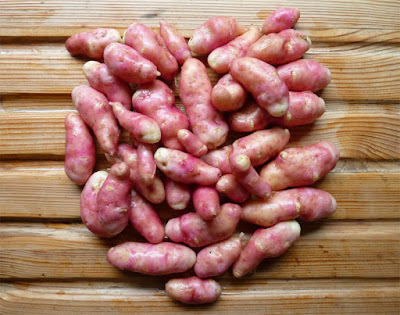 Last night I took my big garden fork out into the dwindling light and began digging under the now-dead top growth. What a difference three months had made. I couldn't help but wish I'd done my research beforehand, as the first baby crop would have been so much more prolific had I left them to grow. However, lesson learned and something to aim for next year.

I've had quite an interesting response to these on my Instagram account - they do still seem to be a rarity over here, though some people have tried and enjoyed them. An Argentinian follower told me that over there they are known as 'Papines' or loosely translated, 'little potato', so I'm guessing that they are a more exotic species in the UK than the traditional King Edwards, but well worth growing if you don't make my initial mistake and dig them up too before their prime. 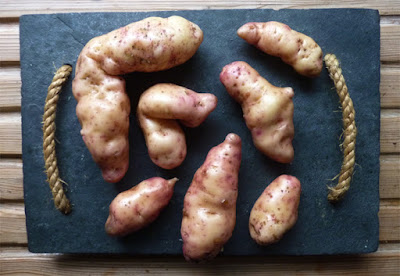 how delightful and unusual ;)
thats the joy of gardening and growing veggies sometimes you get real surprises...love the colour and shape...nothing better than growing your own x

Lucky you! I came across this variety of potato when I was painting the illustrations for a book and was allowed to eat my subjects after they had their portrait done! They are delicious - the closest you can find in the shops is Sainsburys 'Anya' which were developed from the fir apple and named after Mr.Sainsbury's daughter I think...I guess some of the facts I was told while painting them stuck!