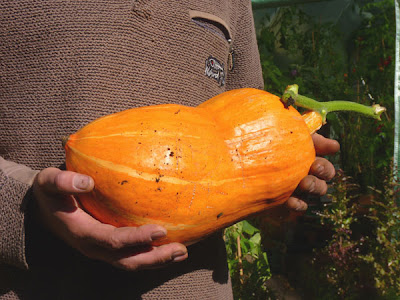 The garden is gently decaying into autumn dishevelment. It's been a good year; we've experienced a steep learning curve with the polytunnel and grown a staggering amount of tomatoes. We've had disappointments; too few green beans, a whole packet of Dumpling Squash which refused to germinate, not enough space to grow as many potatoes as we need. Slow Acorn Squash which are only just flowering - too late. Made mistakes; garlic which we misplanted and failed. Put courgettes in the tunnel when they didn't need to be. Planted them out once the broad beans were over and we had the space. But these are part and parcel of gardening and no year is perfect. We hope to learn not to make the same mistakes twice (but often do). It's good to look back and see how our year went. Our once yearly pea indulgence - one whole packet scattered and grown closely in a small square. 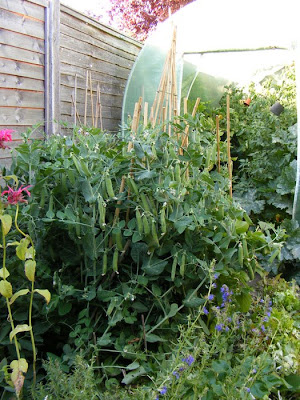 Broad beans - we were ambivalent about this type, the Sutton; they didn't grow tall enough and the pods could have been longer. Nonetheless, fresh broad beans are heavenly, no matter what. 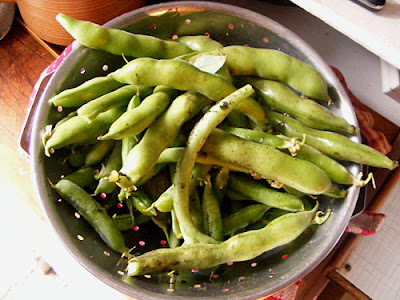 Growing a minuscule crop of round carrots in a tub. 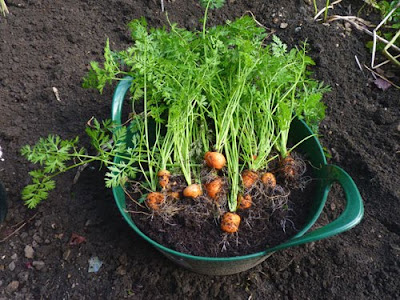 They were quite small, a bit holey in places and funny shaped. Only enough for a few each, but they were the carrotiest carrots we've had since the last time we grew carrots. 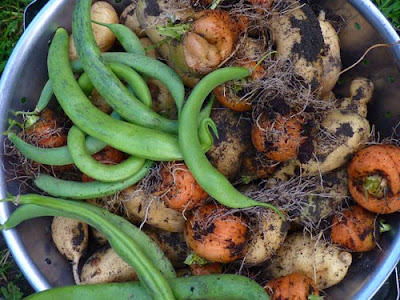 Finally managing to grow one of my favourite flowers, sweet peas, in a big pot; they don't grow well in the garden and we need the space for veg. I luxuriated in having a regular posy of them to sweeten the air. 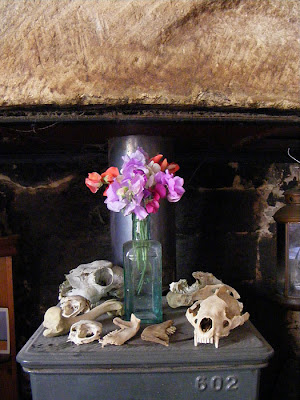 From August we have had mostly our own potatoes - not huge amounts, but just enough to keep us going. Duke of York reds - 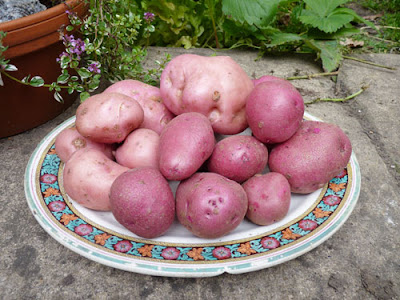 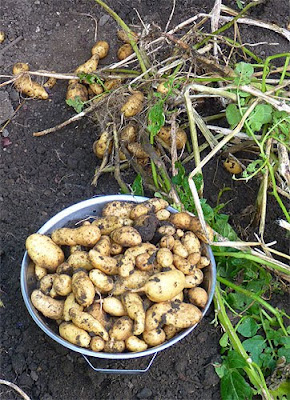 And good old reliable (not to mention delicious) King Edwards. 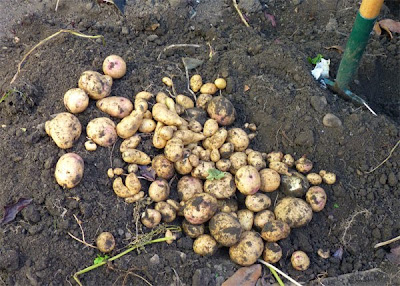 Our Boston Marrow squash were a big success. If a certain LB is reading this, then here are the results of your seed packet from America - thank you for the pleasure we've had with them. 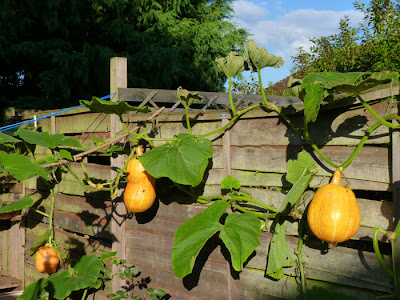 We were rather proud. 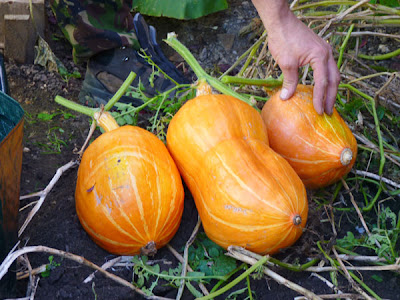 There isn't really enough storage space to preserve these beauties safely, so they rest in majesty on the stairs. 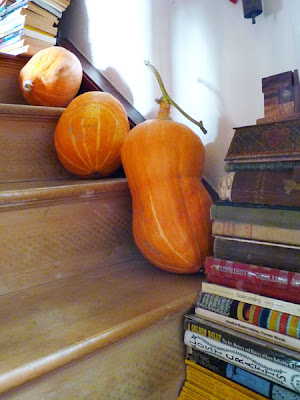 We picked modest batches of strawberries all summer long. 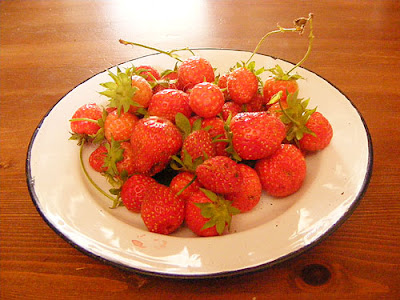 And my new fig tree came complete with one magnificent, succulent fruit. 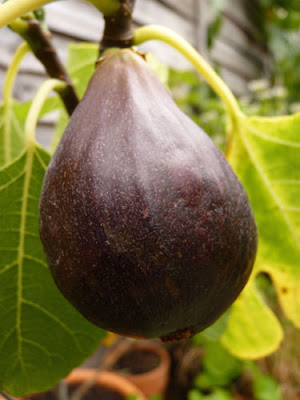 Tomatoes we had plenty of! What a beautiful crop it is to grow. From over-ripe sweet 'chezzers' - 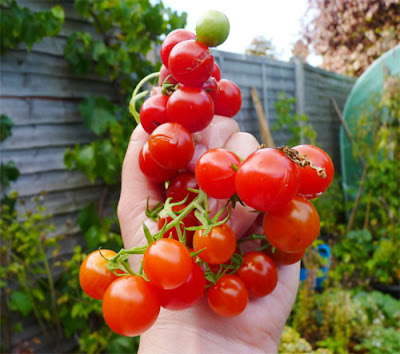 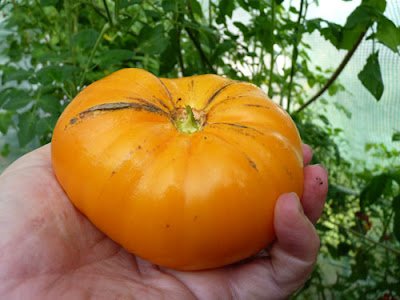 A bountiful crop of Principe Borghese plum tomatoes - one of the best types we have grown, very prolific and one to remember for next year. 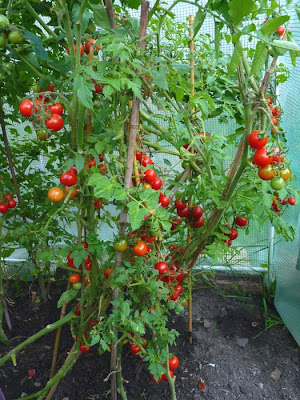 Buxom, blushing Brandywines, grown from seeds sent from the USA by Janet - 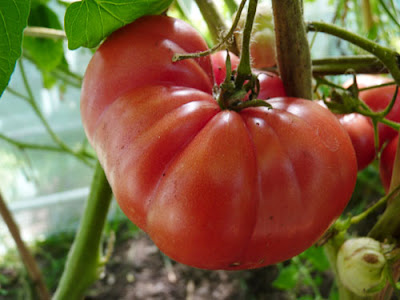 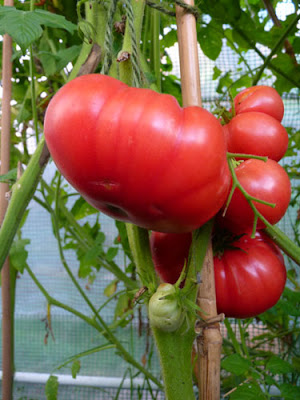 All these - and one small cucumber which somehow managed to grow in their midst, despite being crowded out.


However we grew far too many - we didn't have to dedicate the entire 14ft polytunnel to them. I think we've exorcised the memories of the last few years of blight now. Split tomatoes have their uses though. 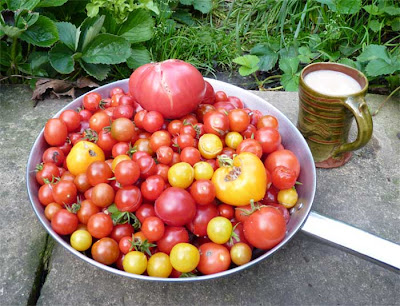 Waiting for a cold winter's night when we will need some bottled summer. 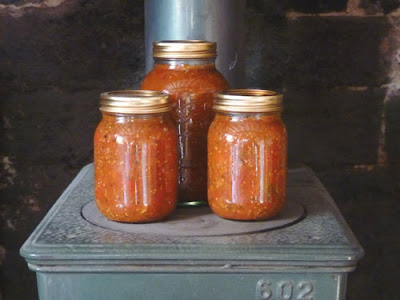 My goodness, what a wonderful harvest!!

What a delicious post! Mmmm, tomatoes... and your posy of sweet peas is beautiful.

It looks very impressive, you will be able to have your very own harvest festival!

wonderful goodies! We've just had our first pumpkin pie as today was Pumpkin party day for all 11 of the family gang. Fun, fun, fun!

How thrilling - your harvest is really impressive! And those squashes are so full of character :D

What a wonderful harvest you have - isn't wonderful to eat veg you've grown yourself, it tastes so wonderful? We only grow a fraction of your lot, but the carrots are my favourite.

Autumn dishevelment, love it. What a harvest you had amazing. Love homegrown veg and digging spuds is like finding buried treasure.
Squash on the stairs, very decorative and sweetpeas are just the best for perfume. So nice to be able to pick a bunch and bring them inside.
Hope your bottled summer goodness will sustain you through WInter.
Mixed morning here, sunshine amongst the clouds,time to head into town for a coffee and the paper.

How delicious. It must be good to have a garden you don't have to fight with. But how on earth do you manage to find the time? Those big squashes remind me of some of your animals. I'm sure you could add feet and faces...

PG, these photos and your commentary have made me laugh with memories of my long ago Brooklyn garden (the strange, yet very carrotty carrots) and all those tomatoes, and goodness...what a variety of potatoes you've grown.
Etc. et al.

We do learn, from past seasons, bits and pieces that might aid our plantings (and on a grander scale of living, our going forth into our future lives.)

How lovely to feel free to try new experiences, to see them through, to watch and learn from it all.

Hey, those squash on your steps are super!

Wow, as a fair-weather gardener, I'm VERY impressed! It all tastes better when you've grown it yourself, I think.

You have had a good year - worth the effort! We had our share of failures too - all my courgette/squash plants got mildew & the potatoes were meagre - but I'm still picking cherry tomatoes & apples, & have enough preserves to keep us going through the winter. We're looking forward to planting even more next year.

Fantastic crops! I can't for the life of me understand this "thing" about broad beans...... can't stand the things myself, so my other half grows them for himself. Carrots from the garden just ARE more carroty than those from the shops, aren't they?

Your garden makes me envious. It was so hot and dry here in the southeastern US that our garden didn't do well at all. Great harvest! Carla

Ho! What a beauty! what a celebration!!!!!!!! wonderful!
I wish I would have a garden
Ayelet

What a fantastic crop!! It brought back memories of the year my Mum died (1995) - it was the first time that I grew courgettes - why, I don't know, as Malcolm and Stuart don't like them!! We had so many that I kept giving bags of them away. It got so that people were running and hiding when they saw me, in case I made them take another bag! Then there were the ones we didn't pick, that ended up the size of babies!!

Wow!
What a harvest!

Very impressive! We managed to avoid blight this year too - such a relief.

My dad always grew Ratte potatoes when I was a kid - we used to think it was very funny because our cat was called Ratty too... The stuff that kids will laugh at eh??

Enjoy the fruits of your labours. :D

Next year I'll start earlier and give my veggies a better chance!

absolutely! can or preserve whatever you can for later..

I'm not sure what got your carrots..but, I remember my Mom planting borage amongst her tomatoes to dispel bugs or some other crop damaging pests... she loved to talk about "companion planting" in order to protect whatever she did grow.

my first garden was an amazing experiment too... but, it was toooo big.... grew like it was on steroids ..and I had so much of everything from just a few seed packets that I was supplying all the neighbours and anybody who would stop to pick up the bags of things I put on the roadside with Please Take me Home signs.... I pickled cucumbers and tomatoes and made tomato sauce until I couldn't stand the sight of one and couldn't stand the smell of the house.. .. .. froze corn, beans and peas...
The woman across the back fence was native and the two of us even dug and built a cold storage mound in her yard for our potatoes and carrots... which worked great. We had great spuds all winter .. even if we did have to dig out lots of snow to find them some days...

.. and we tried to find somebody...anybody...to take the cukes and tomatoes we absolutely couldn't use.... There was still waste and I felt awful.

I have had several gardens since then... but in different yards... and have never been able to grow anything like I did that year.

What a fantastic harvest from such a small space. I wonder if the fact that it is enclosed helps, in addition to all your hard work of course. I hope you had a little Harvest Home feast.

WOW WOW WOW
Incredible! What a lovely garden and harvest. I have to say I've never heard of Boston Marrow Squash. Are they not edible??

amazing harvest. carrotiest carrots are the best. we only had a few too but the taste was wonderful. love the marrows and where they are positionned, now i want to tear up our stair carpet! your wee cucmber reminds me of our 1 successful cucumber this year too.
growing and preserving produce is so rewarding, best feeling!!
xx

Everything looks so delicious! What a treat it will be to enjoy canned tomatoes during the colder months.

I have enjoyed watching your garden grow this year.
For several years I tried growing pumpkins, inspired by the Milly Molly Mandy story. They came up and flourished, taking over most of the flower bed and producing the prettiest little gleaming-gold pumpkins - and every one of them was snipped off and mangled by the raccoons or possums.
I think you have done magnificent home gardening together!

What a great crop you had this season...I'm so very impressed! So happy you had good luck with the seeds I sent..the tomatoes look delicious! My Bill was very jealous ;-) Looks like you be enjoying your bounty well into the winter..which is wonderful and economical.
Now you get put the garden to bed and relax a little.

Just popping round to let you know that I've tagged you in my latest blog post:
http://wp.me/p11YdZ-cJ

Do pop round if you want to play - but no worries if not ;-)
Ali