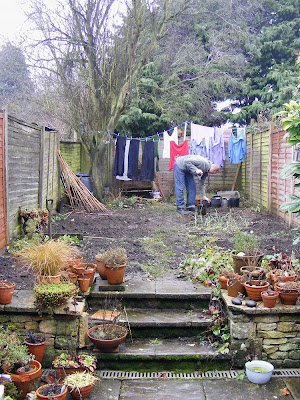 Our little back garden is small and scruffy. This is Andy in the winter, having a first, exploratory dig. Excuse the washing line, the weeds and the tatty pots; we are a humble household, despite living in the grand Cotswolds. The earth looks good, but is not very nutritious, no matter what we add. If it were really and truly our own, we would transform it; as it is, our slack and greedy landlord should be thankful that when we leave, it will not be waist high in nettles and weeds, as it was when we moved in. Enough sourness. We have fun with our little bits of earth and have learned what we can and can't grow. This year (hopefully our last one here), we are simply growing as much as we can of the things which thrive. NOT root vegetables/onions/brassicas/garlic/sweetcorn. They have been poor performers. Stones grow well though. Today brought more lovely sun and we had packets of seeds whispering enticements from their pretty packets. We went down to our local DIY shop and picked up a large bag of compost. Andy slung it over his shoulder like a captured wife and we headed home. Nice Mrs S. was in her garden and I raced across the road to ask her if she had EGGS? Yes, she did have EGGS, lots, the hens had been squeezing them out. So we picked up a dozen. Mrs S's egg supply has been a bit hit and miss, and she is the only person in the village who sells them. But now she has a handy honesty bag on her doorstep (if you know where to find it) so I only have to walk ten minutes down the road for Good Eggs. Eggs are my favourite food. Ever. 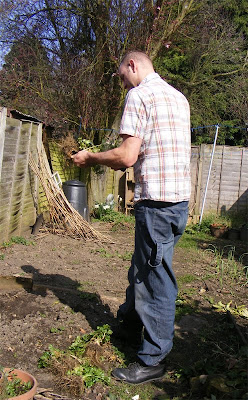 Now we had compost, and an afternoon of quiet seed planting (me) and bed digging (Andy) ahead. First to unearth the last miserable attempts at celeriac. We had harvested enough on Christmas day (tennis and golf ball size) to make very tasty mash for dinner. The last few had managed to grow to more respectable sizes, and were now 'baby' rather than 'miniature'. Andy has a natural, peasant action when it comes to digging and trimming veg, you'd think he'd been doing it all his life. 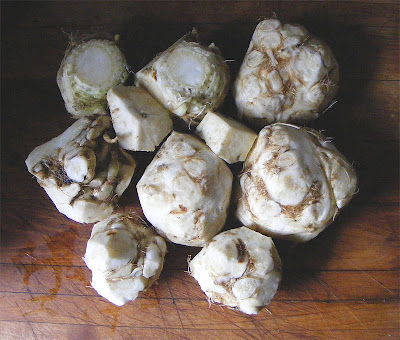 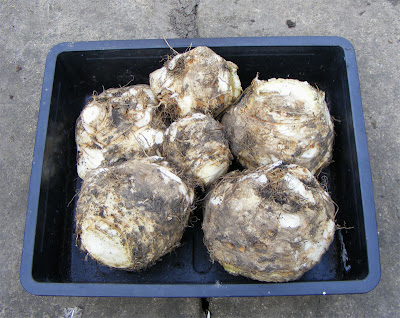 There is something so reviving about pottering in the garden. The gentle routine of nestling neat rows of seeds into fresh earth, imagining what riches they will bring forth. The smallest of events becomes an adventure; a sleepy bumble bee crashing around, strange grubs unearthed. We even caught a tiger - 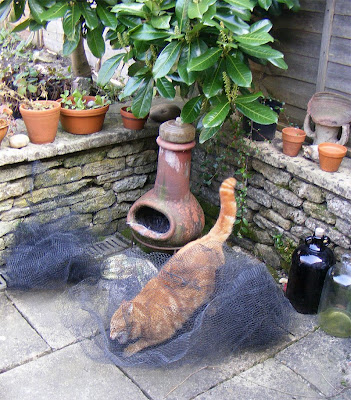 I planted early peas directly into the old celeriac bed. Peas are one of the things we do well, despite my anarchic approach. A couple of years ago I thought that planting them in rows was a waste of space which we could ill afford, and after all - in the wild - seeds self sow themselves willynilly. So I sowed an entire pack in a small square, by hurling them out and loosely covering them. Amazingly it worked brilliantly, so this is how we do it now - the 'scatter gun' technique. 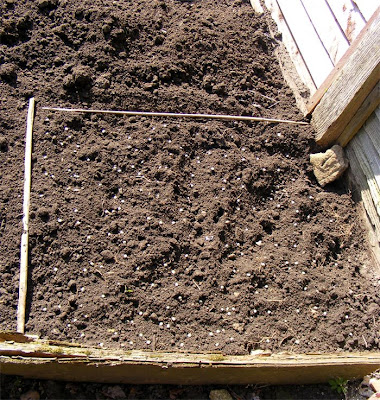 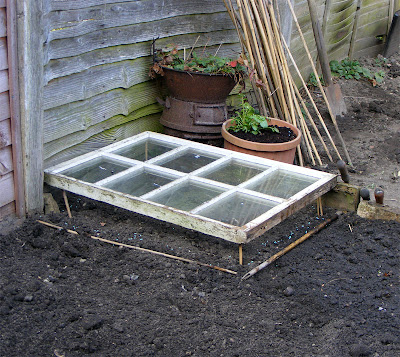 We had three garden helpers, but they decided to catch some rays - and the gingers do love the sun. Mousie stayed under her plastic tub, which keeps the warmth in, like a furry little potato being baked in a pot. 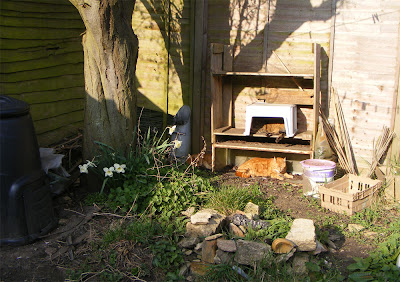 At the end of the day, when the wind was getting a bit picky, I had sown; stripy courgettes and round courgettes, purple beans and white beans, outdoor cucumbers, German Orange strawberry tomatoes and Cerise cherry tomatoes, chillies, 3 types of nasturtiums, Jolly Jester marigolds, peas, dwarf broad beans, spinach, mixed leaf salad and I still haven't finished. There are four types of potatoes chitting in egg boxes, by my much neglected Adana press... 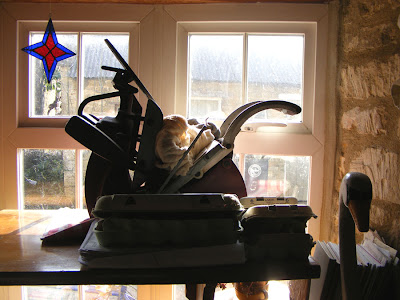 ...and we now share the bedroom with two trays of seeds - and two 'cheat' tomato plants we bought, just to be sure we get some tomatoes this year as we lost most of ours to blight last year and the year before. Yes, those are two old sewing machines on the right hand side. I wish I could show you rolling country views from our window, but living in the centre of the village we are hemmed in by (albeit picturesque) houses and cottages. But I've lived in worse places, so I enjoy the views every single day. Roofs and all. 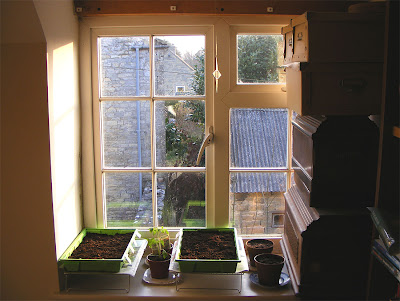 Feeling all windswept, sun kissed and sleepy, I drowsed while Andy cooked bacon, sausages and Mrs S's EGGS, which were big, golden and completely delicious. And despite the crashings from the kitchen, as utensils were hurled into the sink, I didn't even have to wash up. Which was completely the perfect end to a delightfully relaxing day. And much needed; the next couple of weeks are going to be occupied with a melange of geese-y things as I tackle the first lap of another jumbo order. 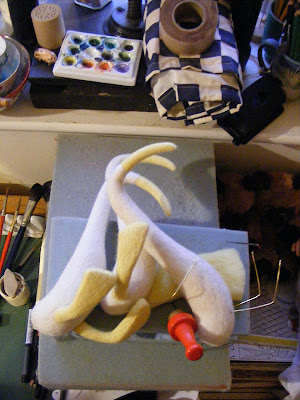 Looks lovely all around there! I'm hoping our pots and patch yield some great things this summer. Eggs from down the road are the best. My mother had a neighbor who always had chickens and nothing to this day can exceed (or even parallel) those eggs, even free range organic ones.

Like the looks of your garden, and the sound of your approach to raising what you want to raise.

Those curvy necks show that some geese with strong personalities are taking shape.

Glad that spring is just about here!

Some of what you wrote about gardening really took me back to some fine memories of Brooklyn in the mid-1970's. Thank you! xo

I adore your writings and photos. I am going to give your method of planting peas a try this year. Hoory Spring !
smiles
LiBBy

Congrats on the order!

You're way ahead of us with some of those seeds, sounds like we'd better get out there and start planting some more. Here's to a good harvest :)

Oh I agree - pottering around the garden is just so blissful and revitalising... T and I spent last weekend planting vegetable seeds (our first ever go at this) and tidying up the garden. Thankfully our landlord and landlady (friends of ours) have a nice garden to start with and they said they don't mind what we do with it so we're having a whale of a time adding our own touches. Sorry to hear your landlord isn't quite so accommodating in regards the garden!

Now I feel hungry and am craving bacon and eggs!

Your garden looks a lot tidier than mine does at the moment.

So, you're planning to move some day. I understand your objections to your litlle garden, but it's heaven for me. We only have two pots of lavander and rosemary in our tiny balcony!
I laugh a lot with the tiger's capture!

Yum! I love celeriac.
Hope you managed to tame that tiger.
Good luck with your goosey work.
Penny.

It's lovely to see your garden and to hear about what you've been planting! I'm scared of losing my precious lupins to the slugs so they still wait patiently in their tiny pots. I hope to release them to their fate tomorrow...weather permitting!x

Ah, yes, I have to get out and weed, we are all over weeds in the back. Thanks for the motivating inspiration!!!! And isn't funny how some things just don't want to grow?

You are good sowing so many veggies - my windowsills are packed with seedlings but all flowers for now. BTW, The Flower has opened at last - yay!!

Gosh you make me green with envy of your little patch which is so rich.
Real peas... yum.
Your ginger cats look cheerful.
Snow in NY today.
Love

You are so lucky to be gardening allready! Your little corner of the world looks beautiful. Here in Canada, the ground is still covered in snow in too many places. The sun is warmer though and you are definetly an inspiration for my gardening ventures! I love how you tell a story.

This is so making me wish my snow was all gone!!! Your place is delightful!!!

Your garden looks absolutely charming!
http://www.life-laundry.com
(sorry for the naff linky but I can't seem to comment using my blog url so used my old, now abandoned one). I'm rambling.

I have eggs for you, anytime you want to stop by and pick them up.

I pulled out the seed-starting flats, and hope to actually, you know, put seeds in them now? And supposedly I have a delivery of horse manure coming to my driveway in the near future to spread over the beds so that I can get the early stuff planted there as well. I will pretend at least that I will actually do this this year. :-)

It's fun to see your yard, and what you are doing with it. I like your pea planting method. Spring is such a great time for projects of all kinds! Enjoy those farm fresh eggs! We cant keep up with our hens, we have to give eggs to friends and family.....

Good heavens, you have nothing to apologize about--your garden looks plenty good from here!

Trying to decide whether we should plant a garden now or wait until the questionable month of March is past... so hard to know around here.

Read your lovely catty-peas-y-sunshiney post on my phone on holiday so couldn't comment, but what I wanted to say was how lovely and well done and what a sweet garden and funny lazy little cats. Glad you could get out in the sunny fresh air we've been treated to before the onset of more stabbing duty.
PS My husband loves your needle felting videos and keeps asking to watch them again! He finds the stab stab stab very relaxing...
PPS Lake District photos to come very soon :-)

I love the pictures! Wonderful!

I see nothing scruffy. Your backyard looks loved. Looking forward to seeing the fruits of your labour.

Spring! It's the best. New things and possibility. All of the preparations...now that you've kissed the crocuses (was it crocoses?) The rest of the garden is going to want to get in on that action...Things will be sprouting in no time!

Love your post. Wish I could come around for a cup of tea with you and Andy and complain about weeds and stones in the garden. I'm sure you would be sympathetic to my weed grumbles!

Love seeing your garden! And the way you plant peas is inspired... lotls of good ideas. Do the cats bother the indoor seed trays? (Mine would have a field day!)

Wow, you can really cram a lot into your garden, and here's me panicking that I haven't planted enough! It's not really a prairie, but the plot at the field is roughly about the size of an allotment. I'm sure I could get more in, but digging those darn beds just about finished me off!

Thanks for the kind words about Max, he's had a good weekend :)

So lovely to see your garden, you are way ahed of me in the planting stakes!!
I love your puss cats they look very like mine!

Hard work,
so much gain,
such joy to read about and look at the pictures,
congratulations.

I also imagined that I would have a vegetable garden. I wonder if I will get one when I grow up. ;)