The cricket season is finally over, and the last bit of kit dried in the late summer sun. In the garden, the vegetable patch, which went somewhat crazy and jungley, is finally admitting defeat. Some of the tomato plants reached over four feet and the beans were wrapping themselves into twisted, vine-like ropes. Now the spinach has taken advantage of the wearying of the beans, and the leaves are forming a glossy green bush. I wonder if the parsnips will raise their heads or if they were smothered in the general fecundity? 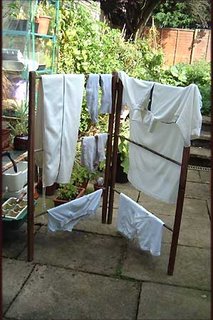 We planted a variety of tomatoes, but in the end it was impossible to tell which was which...the maroon beefsteaks are 'Black from Tula' I think, and the big yellow ones might be 'Sunbelle'...or is that the little yellow plummy types? There was one called 'Cherokee' which may be rosy pink; my planting list disappeared in the big Autumn Clearout, (see below), so I have no way of knowing what is what until we clear the patch and the tags emerge. This year we discovered that slugs are not the only fruit gobblers - woodlice, which I normally tolerate, have been found munching away at the skin, leaving scabby areas, as you can see on that one down there, no, there, just to to the left, that's right, under the fat yellow one. 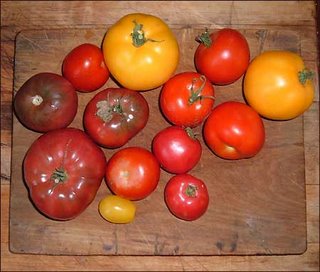 Everywhere farmers are ploughing their fields and the landscape is a gentle blur of tertiary tones. There seems to be a final flurry of wildlife as creatures prepeare in their own way for the onset of winter, whether it be late swallows snapping up dozy insects, or crows following the freshly dug furrows. 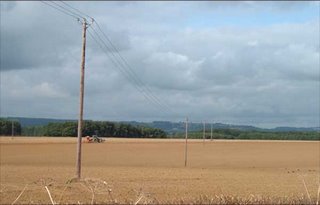 Even in September there are butterflies to be seen, sunning themselves on blackberry bushes, like this magnificent Red Admiral, or bobbing about over the berry speckled hedgerows. Just up the road there is a large ivy bush come into bloom, and on sunny days it is swarming with honey bees, busily gathering pollen and buzzing warmly amongst themselves. Their soft droning reminds me of quietly gossiping women, and I wonder if that is why 'quilting bees' are so named - the murmuring of many voices chatting away, accompanied by industrious sewing. 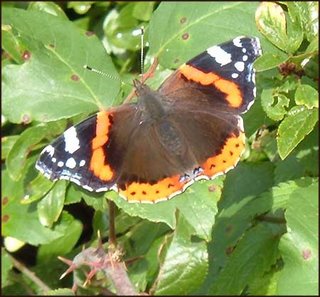 Yesterday we took a long morning walk, to catch the last of summer. There were buzzards marking out their territory with mewling cries. The youngsters are grown now, and their higher calls can be heard as they soar above what they hope will become their kingdom. A pair of deer sprang from the bushes and fled across a wide open field, their silky brown bodies barely visible against the umber earth. High up in a silver birch, fat hornets bustled about their nest in the trunk. The colony is at its peak now - after a final mating flight, the drones will die. In the end, only fertilised queens will live through the winter, to start new nests next year. Hornets are magnificent creatures. We have watched them elsewhere, taking food back to their home, with larger 'bouncers' keeping sentry duty at the nest door. Unless stupidly provoked, they are not looking for trouble, and can be observed quietly without fear of stinging. 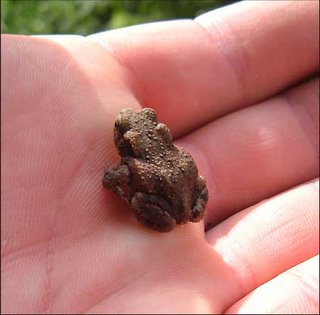 We have seen many young frogs this year, but I have never found a baby toad. Just about an inch in length, and found crawling across the road. It sat, like a small wooden brooch in Andy's hand, before flumping off into the damp grass. Today the skies are a damp, paste grey and a moist wind harries the treetops. I think that soon we will light the first fire.
Posted by Gretel at 21:27

A wonderfully evocative post. I can't believe that toad is so tiny - must show the girls when they're home from school. And such a beautiful butterfly photo.

I was digging in one of my pots, to get some soil out for captains ruperts littler box. (it makes plants grow like triffids) I had the fright of my life this fat toad jumped out narrowly escaping my little fork. Thats a sweet baby toad and a lovely post.

It's very autumnal here in Devon today - grey sky and windy! There's something about the autumn ... ;)

In the depth of winter, there is nothing like sitting up close to an open fire in a darkened room with flames dancing and whispering. I still prefer summer though!

What a lovely post.
Several times this past week I've smelt something in the air that reminds me winter is coming.
I keep wanting to put the lamps on in the evening an curl up in front of the coal fire... then I remember we don't have a coal fire anymore, and the pretend gas one just isn't the same.

I almost feel like I am there with your wonderful descriptions. I can almost smell the fall.

Ah Autumn, I love it, and my your whites are really white!!
Fab little toad, not you dear PG, the little guy in the photo!

Such lovely descriptions! I wish I was there! I love the little toadie and your lovely tomatoes! Beautiful pictures - I love the autumn!

I love your commentary on the changing season. I could close my eyes and be right there with you. The butterfly is so pretty and that frog is sweet. I know, hornets are gorgeous little creatures, but ouch, if they sting, watch out!

I have never seen a baby toad before, that is amazing. We have a very large toad that moves between my garden and my neighbours, he is a fascinating old thing. I have noticed with these late sunny days there are still a lot of butterflies around.

I just love your blog,
I really do,
it's ridiculous!
Never stop!

Gorgeous, evocative stuff - as ever!

I can almost smell and feel and hear the air and the life, this is lovely.

That little toad is SO SWEET!

btw, spinach soup is delicious with a little parsnip added!

Connie mentioned you in her blog today and I just wanted to drop by and say Hi! I've bookmarked you if you don't mind and will come back to visit with you as I find you very interesting and loved the picture of the wee frog!!
:-D