I don't know why I think of her as 'poor'...maybe because it's taken me almost exactly a year to get round to painting her up from the original scribble. And as I painted, I wondered (not for the first time) about why I drew her, what it all means, and all that kind of good old naval gazing stuff. Then I stopped, because there's some places I don't want to go. It's a toy bird. With a patchwork egg and hand knitted socks. End of story. 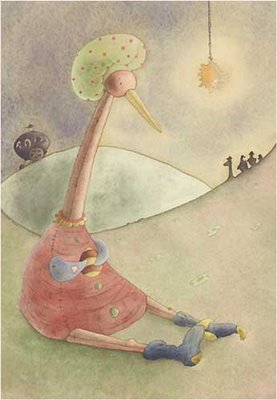 She wears her heart on her sleeve - literally. And like a lot of us, she's a bit saggy in places she didn't used to be. 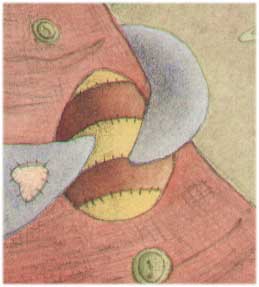 This is a bit disturbing...it's the same driver from 'The Lost Balloon'. I never did like him. He drove a taxi previously, and is making a habit of turning up in my work, lurking in the background. What is he waiting for? Why did I put him in? What sinister secrets is he hiding? Stop. It's a toy bird. With a patchwork egg and hand knitted socks. End of story. 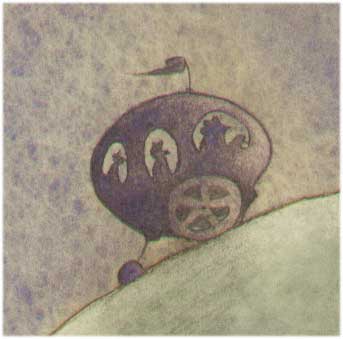 And here are some potential passengers...oh look, there's a tiny yolk on the sign...I spent a large amount of my childhood waiting for buses with my mum; I wonder if that's me as a little chick. So who are the other two characters? How long have they been waiting? Has dreamy Celia missed the bus? No. It's a toy bird. With a patchwork egg and hand knitted socks. End of story... 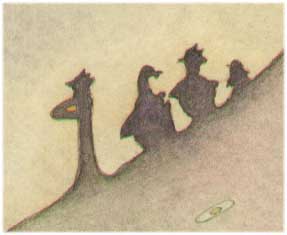 She's turned out lovely Gretel!
Less of the deep thoughts about what it all means or you'll start me off (not a good thing) ... I can imagine all sorts in the most innocent of things! ;)

I think Celia looks rather sad and old, I think that the patchwork egg reminds of her of all her fledglings that have long left her nest. Hang on I could get carried away here and start analysing and thinking deep thoughts. She is rather sweet though.

I'd love to know if your sinister taxi driver will pop up in your work at some future date. He sounds a shifty character.

Celia is lovely with her egg. She looks like she is keeping it very safe. Far away from that taxi driver.

Oh she does look sad! It’s as if everyone else in the picture has some where to go except her. But then again the painting has warmth about it, so I think she is on a journey and has stopped to rest and the egg she is holding tenderly holds all her memories, regrets and experiences. Maybe the taxi driver is a metaphor for the future and the unknown? Beautifully painted Gretel

I think she is quite beautiful, and I absolutely adore her heart on her sleeve - perfect. She is gorgeously quirky - I want some of those hand knitted socks!!

Her hat (looks kind of like a shower cap - for a bird) is my favorite part I think. :-)

I'm glad you are getting some time to do personal work. I can dream about that...

Beautiful melancholic hopeful Celia. I love her expression and the droopy handknit socks.

I adore your illustrations and storyline. Please keep it going!!! What a talent!

Oh what a fascinating painting Gretel. Thanks for the extra little insight- it is amazing how much it changes your view of the image. Poor Celia. xoxoxox

I love the colours you use Gretel, especially the background washes, the pinks and greens and purples are so delicate.
As for saggy, I think my sags are so padded out that they're not really saggy!
Penny. x