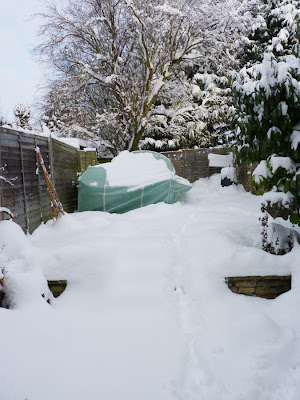 Long term readers may remember that the heavy snows at Christmas and my neglectfulness caused our lovely polytunnel to implode. It was quietly heartbreaking and we didn't get round to clearing it until April. Andy dismantled it and I tidied up the debris. Our little back garden looked desolate. But I sowed a patch of broad beans, just over there to the left, covered with netting. Because you've got to really, haven't you? 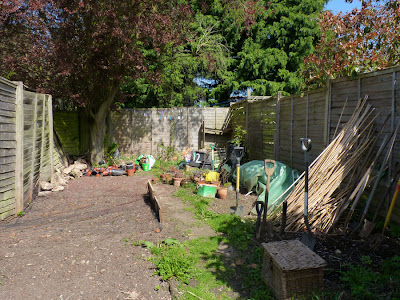 Sowing seeds and sorting out the many winter casualties took some weeks, due to other commitments and lack of motivation; it looked as if the broad beans might be the only veg we harvested this year. This sparse looking snapshot was actually taken in June, not so long ago. 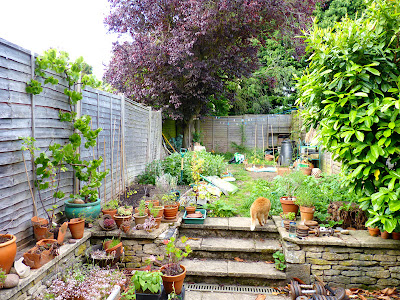 Gradually things got planted and repotted, pruned back and rescued. Our small yearly harvests will be late, but just as welcome. From here, it all looks somewhat weedy and jungly. And it is true, there are things growing where things shouldn't be - apart from pesky weeds, there are tomatoes in with the broad beans, thrown up from seeds dropped by the tomatoes in last years polytunnel harvest. The strawberries take care of themselves and grow everywhere, eternally fighting with the twitch grass and Clover's big ginger bottom which regularly sits on them. 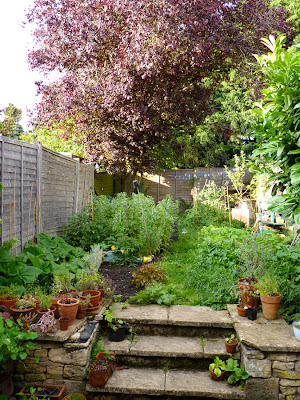 I always forget what thugs squash can be - these *little* patty pans needed tying back, before they swamped the dwarf beans. 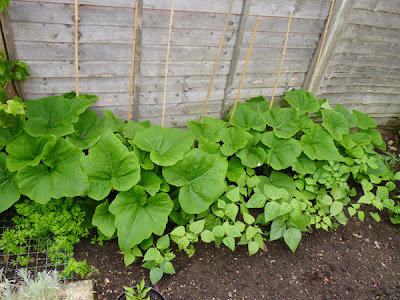 So I've forced them up and back with string and poles, to give the beans a chance. And finding another rogue tomato growing between the bean rows! 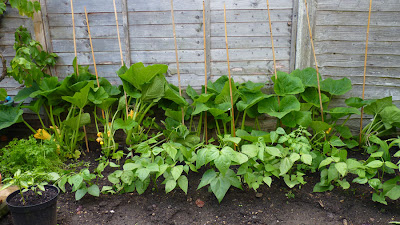 Tiny patty pan squash, just an inch or so wide. 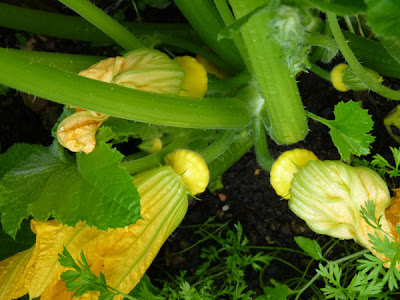 Then the beans were given a bean frame, and the tomato plant growing amid them was carefully replanted to it's own spot nearby. 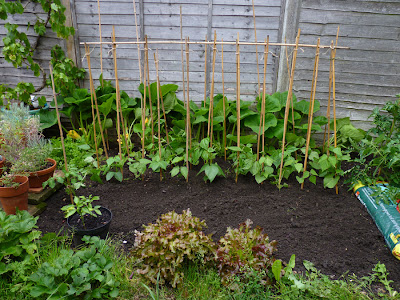 These two humongous, lovely lettuces are from the 'cut and come again' mixed salad leaf bed sown in this patch last year. Now they are grown up lettuce and ready to be picked. 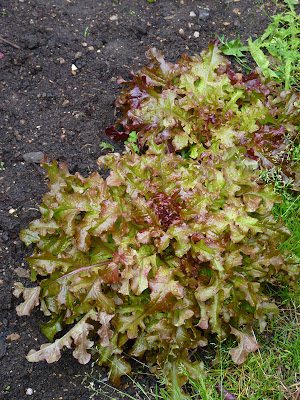 This rambling patch of green is a hugger mugger potager of salad, courgettes, more dwarf beans, tomatoes, chard and the odd rogue potato. Despite the close planting, everything is doing well. 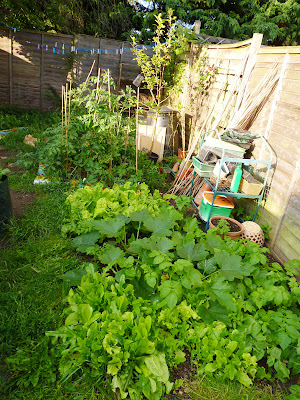 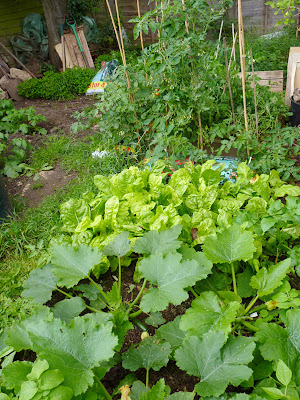 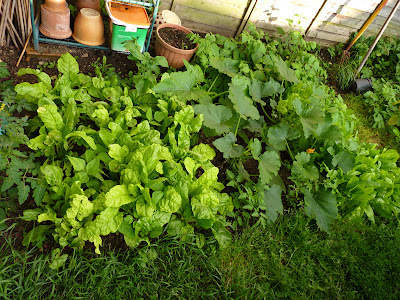 Hiding somewhere in there are our first wax beans - just a few more days. 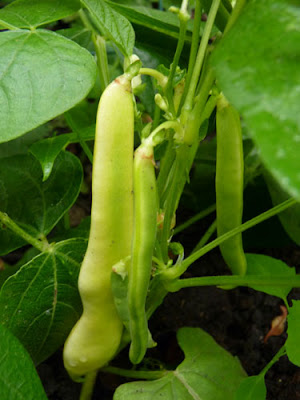 For the first time ever, I resisted the urge to plant a zillion tomato seeds; we bought a few various ones from local table tops and the rest are simply 'volunteers'. 'Gardener's Delight' is living up to it's name and look, oh joyous day, there are actually ripening tomatoes! After years of blight, this is a marvellous thing. 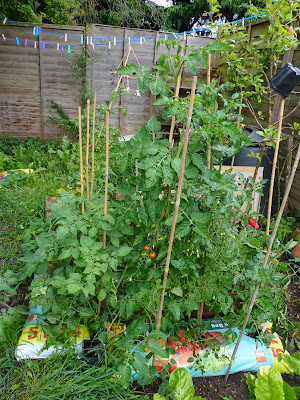 They are placed around a raised bed of peas, which are not doing as well as I'd like, considering they were grown in our own compost, but after a week or so of rain they are coming on. 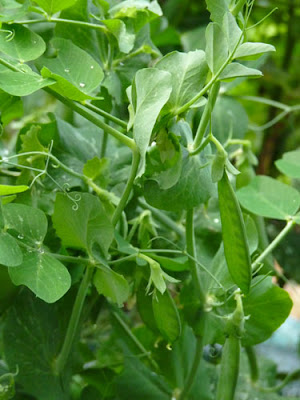 As I left it far too late to purchase special potato seed stock, I reverted to my childhood method of simply planting old shop spuds which were sprouting. They're doing very well, in trenches and one batch in a sack - my first time at trying this. I'll be interested to see which method has better results. 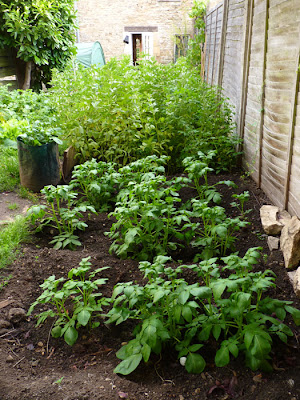 This is one of my 'Blair Witch' charms, to look after the garden; one hare's skull and three portions of what I think are badger spine bones - could be deer. (If you think that's bad, never look inside my pockets...) 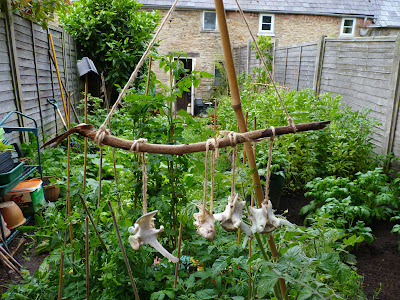 So although it all looks a bit disorganised, this is really a densely packed living larder. 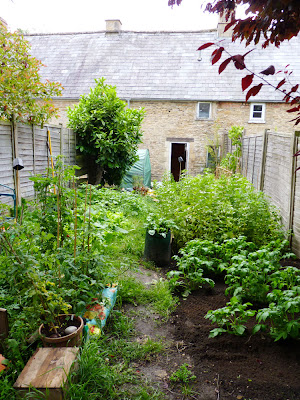 I even have a fairly respectable pot herb garden again, and of course, sweet peas and nasturtiums. Can't do without those. 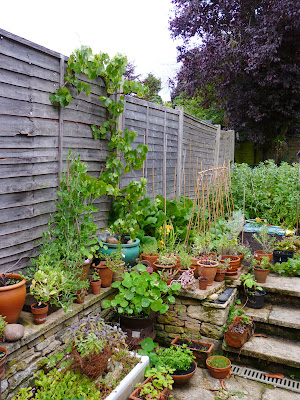 And finally the broad beans are ready. This is a really great variety, Suprifin, which I'll definitely be planting again. Just in front are three 'volunteer' tomatoes from last year - popped up in the ground and were shown mercy. Variety unknown, but probably Brandywines. 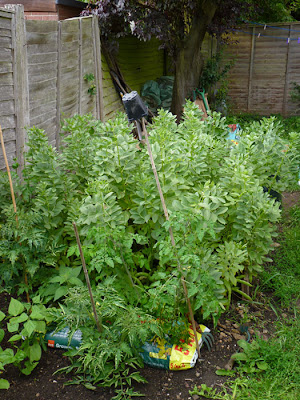 Deep in the bean patch, I am so pleased! Lovely big pods, heavy crops and plants just the right height; nice and tall but not too tall, so no staking required. Perfect. 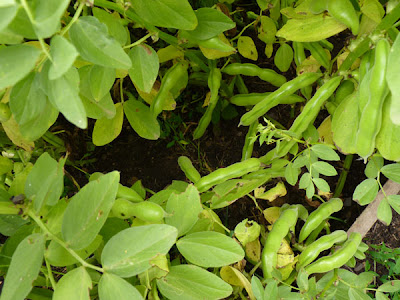 Picking our first crop the other night, I was very glad that I'd mustered myself to rescue the remnants of the garden. This is why we do it. 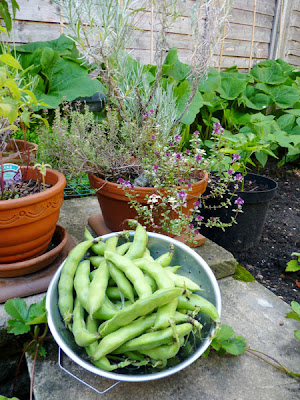 It just wouldn't be summer without a few homegrown treats. 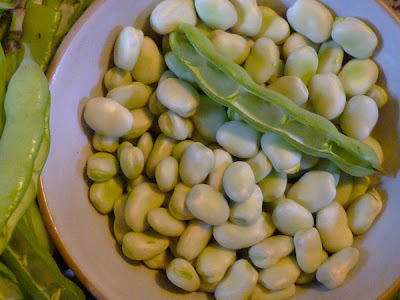 Wonderful, please Gretel, come and cast your magic over my garden. We are hopeless.

Enjoy your lovely crops, what a reward for all that hard work.

"Rogue potato" brought up this mental image of Mr. Potato Head attempting to skyjack a transatlantic flight... "Take me to Cuba or you'll all be french fries!" Needless to say, these days he'd be mashed in a dogpile of his irate fellow passengers.

Loved all the verdant garden shots and the lovely lettuces... almost like being at Longmeadow with Monty! But the little gem below made me laugh out loud!

"This is one of my 'Blair Witch' charms, to look after the garden; one hare's skull and three portions of what I think are badger spine bones - could be deer. (If you think that's bad, never look inside my pockets...)" !!!

Fascinating to see the recovery of your veggie plot through the seasons, well done! Jane G

The pleasure of having your own home grown veg......you can't put a price on it.

Gretel your garden looks quite prolific despite the damage done by snow in Winter..............

Lots of treasures tucked away waiting to be discovered.
I'm just starting to think about Summer and what we might grow. So unlike me to be organised, hehehe.

I wish my garden was doing as well! Still, we had a hodge-podge of mixed baby veg from the garden for tea tonight as well as home grown potatoes, so it is producing, albeit in small quantities. What we do have in huge quantities this year is grapes - bizarre!

Impressive, Gretel! don't discount those volunteers. they often do better than their purposely planted counterparts. I was put in mind of a Mediterranean patch, frankly

Wow, Gretel, you all have definitely gotten that garden space back into summer action after last winter's bleak times.

How clever you and Andy are in figuring out how to make the most of this space.

Some of what you show in the photos do remind me of my early 1970's Brooklyn garden, where space was limited, but much was grown. Thank you for allowing my to travel into nostalgia.

Enjoy all those ripening vegetables! xo

I roared with laughter at your "Blair Witch" charms.... wonderful! Gardens take a lot of keeping up with and I know that there are times I just don't keep up with ours.... BUT I do rather love the stuff that self seeds and surprises .............

wondeful stuff - just waiting for my first runner beans and I agree, there is nothing like home grown.

I glanced at your post on my Reader sans specs and thought oh blimey- now we've got SNOW!!

Love the BlairWitch idea...haven't seen anything like that in the local NGS open gardens around here (wonder why!)

have a good weekend
x

I am very impressed indeed. What a bumpercrop you have and how lovely your garden looks now with all the activity! I must say though, that if I peered over your fence, seeing those skulls hanging there I might be inclined to think you were a witch casting spells!;)

Hooray for your garden! It's such a wonderfully used space. Good for you. It sure wouldn't be summer without a bit of garden. I love it all, especially your bone charm. I think my garden may need one like it.

It's such a lovely place that garden of yours. Somethin gof how I picture little "Secret gardens" as it were. My garden fell to the over 100 degree summer. Only survivors are the rosemary and the sage.

Wow - what a lot of goodies you pack into your little veg patch - well done you!

Wow! your garden area is huge! and full of goodies! .... I didn't even plant a tomato this year....and I love a home grown tomato fresh off the vine.
Mostly my yard is grass and flowers...but, I'm thinking of fencing in the back portion and then....could get busy with some veggies...

Isn't it lovely harvesting your own veg, you have got loads going on there! One day I will find time to grow more, we've got plums all nearly ready for picking soon, I feel a plum crumble coming on :) Love your cupcake banner by the way! Catherine x

You can't beat your own homegrown veg! Mmmmm!

Lovely series of shots, nice to see everything doing so well. A true 'potager'.

It's amazing what a lot of hardwork and love can do...compete a wonderful treasure.

What an amazing amount of veggies - and the higgledy-piggledy look just adds charm!!

I rejoice with you over the abundance that is back in your garden! Hard work, but what rewards!

My father used to stalk up most everything - eggplants, tomatoes, you name it - to get the most out of his tiny greenhouse and his vegetable plot.

do you make a green hummus of the broadbeans? i learned one from the river cottage programs and it's practically all we eat at the moment. this was a great peek at your little garden - what an awesome job you've done of packing all sorts of things in!! and that reminds me, i really should go weed...