Oooh, it's all gone a bit strange in the toy department. I seem to be going from nice 'nursery' pictures to something rather weird. While I'm in a quiet period, I'm playing about with a new series of paintings, with a view to having a Real Life exhibition - if any gallery will have me. This almost certainly won't happen, as with any luck some proper paying work will come along, but I'm following a theory a friend used to have - if he was waiting for a bus, and it took ages coming he would roll a ciggy, and as soon as he lit up, a bus would appear and he'd have to put it out. So maybe if I plan a batch of oddly shaped toys (mutant doesn't sound very nice does it?) then a juicy publishing job will turn up.
I always struggle with colour. It doesn't come naturally; I can pull it off, but it is the equivalent of a ballerina doing a seemingly effortless set of moves. She seems to float on air, while inside her shoes her feet are bleeding. OK, maybe not that extreme, but I do have to plan carefully or it all goes horribly wrong. With these paintings I want to include more interesting backgrounds and unusual colours. Vintage meets kitsch. This dog was to have a seventies feel, and you can't get more seventies than a nice brown/orange combination. So I did some hunting on the internet for original designs and found some samples. Here is the rough taken into a well known paint programme and rather crudely touched in, using original wallpaper clips to help me. 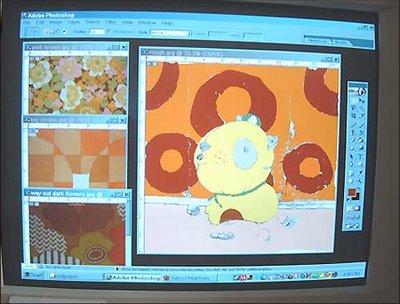 And here is the final, using similar colours -the actual paper design is my own. Working out the basics on the PC saves a lot of time and grief. I like the wallpaper and the basic dog shape, but I wish I'd stuck to my original plan of having the eye patch a dirty grey, instead of green. What I would like to do is enlarge it and do a really big version. If the bus turns up (as it were) I'll be doing some more of these. 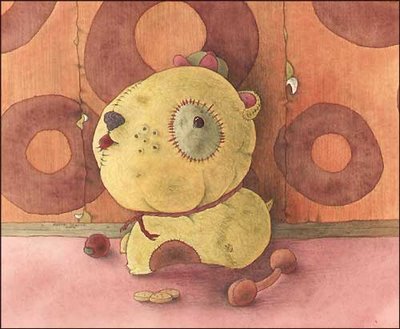 Bidding has started on the online auction mentioned below, at Hidden Haven Homestead blog. It's got off to a good start, and there's more to come. Go on, go and have a look...there's a lot of nice things to be found and new things being put up every day.
Posted by Gretel at 16:00

hmmmmmmm.....now that`s weird that the letters I had to type appeared!

Buttercup is lovely. Love the wall paper too. Hope you do have an exhibition all though that bus advace is very good and I hope your bus turns up.

I love Buttercup, is Buttecup a he?I thought he had a school cap balancing on one ear, or is it, think I better go and look for my reading glasses after this. Well Buttercup looks as thought his lips are all puckered up for a kiss, a very rakish dog.

That was really strange when this comment appeared on your comments site it turned buttercup yellow and then after while went white. I think the cyber imps are at play.

Awwww, Buttercup is soooo sweet. Not a mutant at all! I have an animal called "an ugly doll." It's not ugly at all, it's quite cute. I guess it's kind of like a bull dog, so ugly, it's cute--a face only a momma could love. (http://www.ningyoushi.com/category/uglydolls) I have the uglydog, but of course. See, Buttercup is so much cuter!!! If you ever do a 3-D prototype, let me know. I'd love to buy one!!! Love him!

Definitely NOT a mutant, I think Buttercup is extremely appealing, and I LOVE his stitched eye and puckered up lips. Great wallpaper design, too - lovin' that retro vibe :D

I really love your illustration - it is very lighthearted & free spirited! Makes me smile every time I check the page =)
And yes, I had to include adorable puppy pictures to counteract the slugs...
kept coming across all these oddities around me & couldn't help but get digi snap-happy!
thanks for the comment!

I love the uglydolls - and this is much cuter than that. Did you see Colouring Outside the Lines entry a few weeks ago about the plushy ameobas she found? And plushy bacteria and viruses I think. You can make toys out of anything! :-)

ahh, thank you everyone, you are so kind! I feel all warm and nice now. Yes, 'he' is a 'he'. And one day, I will get round to attempting to making some toys in the round...one day...

This is really interesting, I enjoy reading about the process, researching the pattern backgrounds, collecting reference, thanks for sharing! I think your paintings are beautiful and I especially like the colours you use.
Have you sent out any promo cards to publishers recently?(sorry to nag, but you do need to notify new buses that you are at the bus stop! )
Penny.x

buttercup is so sweet, i love his eye and his little hat..sweet boy..

Lovely painting! Very enigmatic... but charming all the while in a very unusual way.
Wonderful colors... so subtle.

Seems to be a popular painting so I'd re-estimate your sales potential as a fine artist.


You're right about the theory of waiting for the bus and how work arrives without any rhyme or reason except that as soon as one is happily occupied doing something else, then of course some damn job comes along to ruin the fun.

It's great to see the steps involved in planning the colours, such a good idea to plan them all out first and see how they work together. It's got me thinking I really should do the same instead of just winging it and then regretting the colour choices and pining for the good ol' 'undo' function.

Diasy Lupin's right, Buttercup does look like he's waiting for a kiss, he's lovely. I'm looking forward to seeing a larger version too, if no bus comes along to distract you before then...

He is lovely....in an abandoned ugly adorable dog sort of way...I'd pick him from the pound for sure!. You should definitely consider doing another exhibition (nag nag) ....I look forward to seeing some more.

Love seeing your process - so interesting to me! He is so cute and just looks like he needs a hug.

From across the pond -
Kristin