I am officially snowed under with work...I haven't left the cottage for over a week, apart from the Big Adventure of going to the village shop. And so, my children, I leave you something to ponder until I have got to grips with deadlines, jobs and other Necessaries of Life. Or have gone quietly mad in the process...
THE NUMPTYS

In the time before time, there was a little girl who lived on a planet with a Sun and a Moon. The planet had a cake tree, a lemonade lake and a hot air balloon for Special Journeys. Every month she polished the Moon and cut the Sun’s hair. Life was very peaceful.
But one day she felt lonely. So she made two friends out of an old dress and called them Numpty One and Numpty Two. 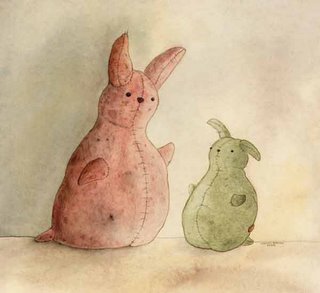 They were delightful. Together they played wonderful games, ate delicious picnics and made stars for the sky. They even built their own house and it was not long before there were more Numptys for the little girl to play with. Those were wonderful times! She had never been so happy. Weeks passed and the Numpty family grew and grew, all intent on having as much fun as possible. They didn’t want to polish the Moon or cut the Sun’s hair. They only wanted to eat cake and lemonade all day. The planet was a-jangle with their babble and noise. The Little Girl woke one day to find the cake tree was bare. That night there was no Moon – she had forgotten to clean it. The Sun grew very hot as its hair grew nearer and nearer the planet. The lemonade lake ran dry. The Numptys were cross.
“We’re too hot! We’re thirsty! We want cake – get us some. Now!” They demanded. When the little girl told them that they had eaten everything they flew into a rage.
“This planet is rubbish!’ they shouted. “We’re off to find a new one.” Before she could stop them, they had piled into the hot air balloon, every single one and sailed off into the sky. Their jabbering voices grew fainter as they floated away, bumping into the dirty Moon as they went.

The planet was suddenly quiet. And very untidy. So the little girl set about clearing up the mess the Numptys had left. As she did, the cake tree sprouted new buds and a trickle of lemonade bubbled up in the lake. Then she got out her second best hot air balloon and polished the moon. And – with a bit of difficulty – cut the Sun’s hair.
Soon the planet was back to normal. It was as if the Numptys had never existed.

Email ThisBlogThis!Share to TwitterShare to FacebookShare to Pinterest
Labels: the numptys

Very darling. I'm right there with you on deadlines... I think my 'sitting muscles' may be permantly asleep...

You got to write and illustrate your stories Gretel....you have to!!
I think your a natural born story teller.

Maya, I have the entire book up there in my head, but not enough time to get it out...I've done some doodling for it, (it makes more sense in context.) Next week, possibly.

Thats a lovley story. I will keep a look out for the stars and think of all those nuaghty numpties! Hope you find the time soon for your books in your head.

How lovely Gretel. I hope we hear more about them in the future.

I love the Numpties! Delightful, the drawing and tale.

Damn those Numptys. Can't trust 'em as far as you can throw 'em.