We both have a couple of days off at the moment, and what with England doing so splendidly in the Ashes, decided to actually watch it on the big screen. We don't have television, although we are radio junkies - while the cricket is on, there's one on upstairs and one down. So we pootled off in search of TV and fine ales. 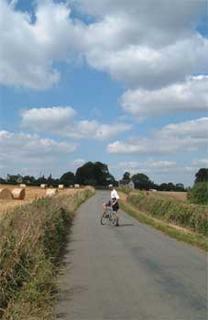 A familiar sight - Andy waiting for me to catch up.

We cycled out to nearby Upper Westcote. The farmers are gathering in the final remnants of harvest and the familiar sight of herds of basking hay rolls can be seen all round.

Do Not Feed
Finally we disembarked at the New Inn, where they kindly installed us in their (empty) restaurant area. So we settled in with beer, (Brakspeare) and proceeded to watch Michael Vaughan, our great English captain, power up the England runs before being caught out by Brad Hodge - Aussie fielding finally getting its act together. 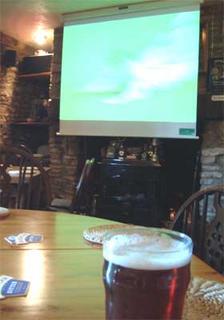 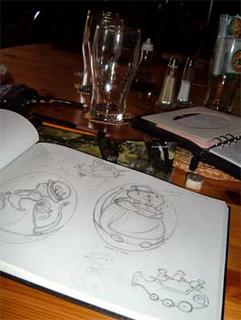 In the end I got several sketches drawn up, so the afternoon wasn't entirely wasted.
Posted by Gretel at 16:06

Email ThisBlogThis!Share to TwitterShare to FacebookShare to Pinterest
Labels: Ashes 2005, harvesting in the Cotswolds, hay rolls, New Inn at Westcote, sketching at the pub, Upper Westcote