I have had an unseemly amount of enjoyment with this new needle felting lark. I used to make a lot of things, which is why I have so much textile-y stuff gathering dust in corners of my studio, but I had to bite the bullet and concentrate on becoming a vaguely competent painter. However - being a typical Cancerian - I hung on to everything, as sewing paraphernalia tends to be beautiful as well as (eventually) useful. In fact - and I am somewhat horrified to count back the years - it has been about a decade since I crafted anything. This month I have other publishing work which must be completed, so grabbing a precious hour or two with my felting needle has been a very guilty pleasure, hence keeping the curious waiting for my initial efforts. As well as waiting for delivery of little ribbons with my logo on, which are obviously being hand embroidered by Mongolian elfs, they are taking so long to arrive.
My first tentative stabs were loosely based on an old artwork, Mr Apricot - 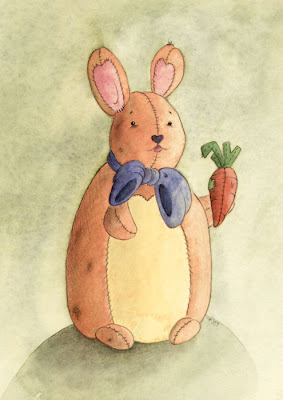 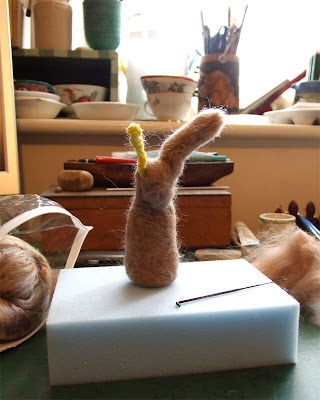 - and ended up like this. Amazingly after all these years of non-sewing, I can still just about embroider a nose and managed to make halfway decent French knots for eyes. 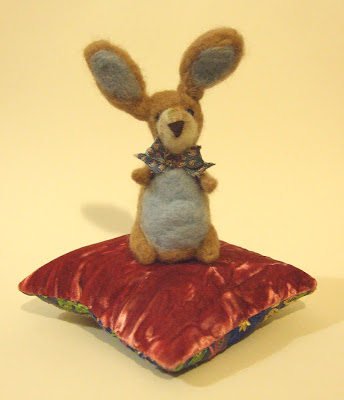 At this point Andy's mum should not be reading, as he is her (very late) birthday present. He was missing something though...and unexpectedly, the wonderfully kind and very wool-centric Border Tart sent me a gorgeous collection of bright fluffy 'accents', all wrapped up in a fairy tale. 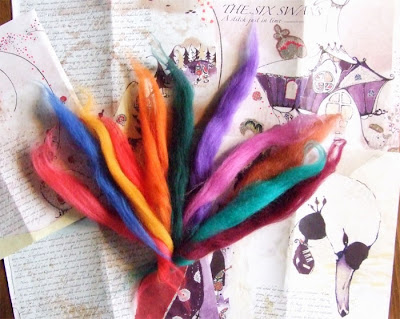 Funnily enough, I had just been looking through her shop to see if she sold these self same articles. Thank you so much Lindsay! Now my rabbit has what every bunny needs; a carrot. 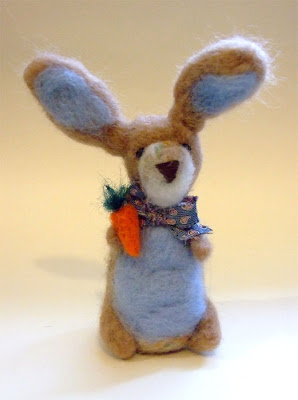 Many years of painting and drawing 2D toys means that I am not at a loss for designs...in fact I wish I could sprout extra limbs, in order to be able to work, spider-like, on several projects at once. 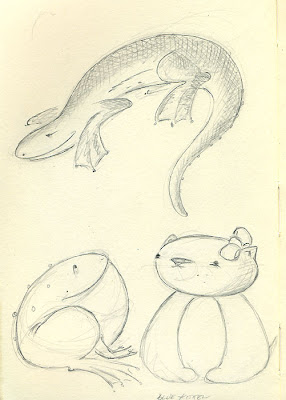 The next idea was unashamedly inspired by a story from a favourite childhood Enid Blyton book, (and from where many early ideas and images fixed themselves in my imagination, still resurfacing in my work today). 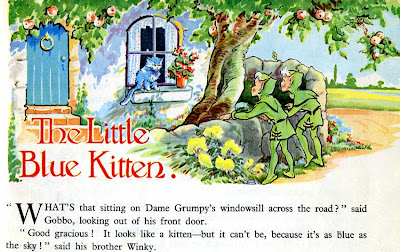 Using a cotton wool base, she started rather bizarrely; a miniature yeti-like creature. 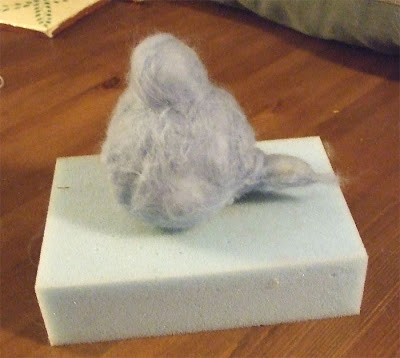 But several thousand stabs later, a bit of embellishment and a pink heart on her posterior she emerged looking plumply cute and rather like a Japanese crafted toy. 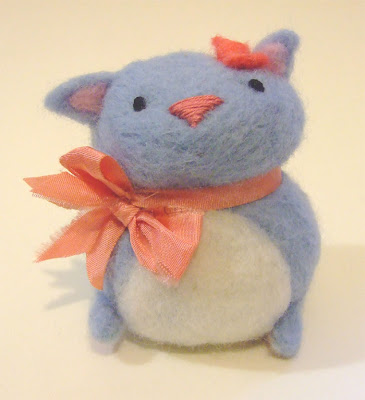 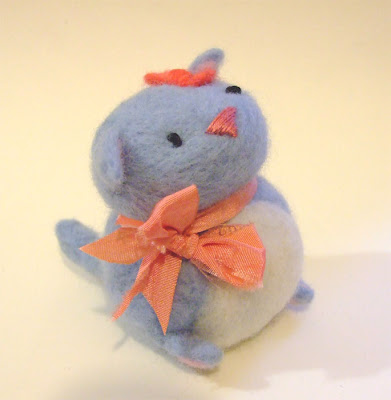 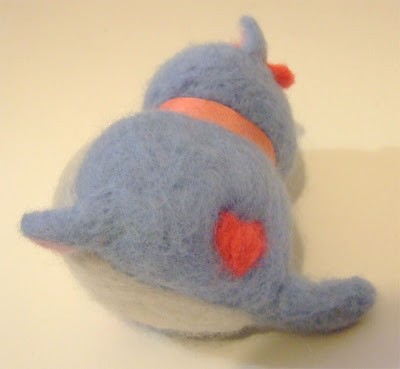 Wanting to move back to a more vintage style, I ransacked my Moleskine again - 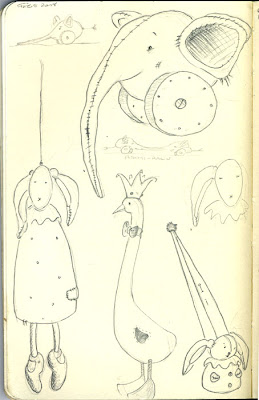 - and started to roll, mould and stab again. Using cotton wool in the kitten saved on actual felting wool, but I seem to get a more satisfactory, organic shape with 100% wool top. So far she is eyeless and wingless. Does she need a crown or a frock? Or both? 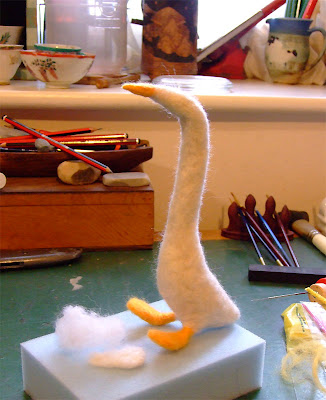 I find it hard to believe there was life before needle felt.

OMG, these are so cute I want to eat them. Or just hold them very close to my face. Lovely!

Thank you so much - I am just relieved they turned out fairly respectable!

These are so cute! I love the fact that you've taken your 2-D illustrations to the next level and have turned them into 3-D creations. Very very cool!

On a side note: I think I need to find myself a copy of "The Little Blue Kitten". I am intrigued.

Hooray! They are brilliant, you've really got a knack for needle-felting. I just love the kitten and can't wait to see how the goose turns out.

These are just so lovely! I find the shape of the goose in particular very appealing. Needle felting seems such a natural cousin to your illustrating. I look forward to seeing further creations. Kathy

Holy smokes! You've certainly taken to needle felting like a duck to water. I love your creations - they are adorable. Methinks you'll be at this craft for a long while.

Absolutely gorgeous, Gretel : ) 'Glad you are getting so much pleasure from needle felting.

Fantastic :) I love the little kitten especially, and the goose will look fab with a little crown and maybe a patch.
I've never got the knack of needlefelting, myself - I don't have a proper needlefelting block though.

Yay! *clapping hands excitedly* I'm terribly happy to be able to see these at what feels like LONG last (what? It's been a *week* hasn't it?). :-) These are turning out wonderfully. Love the kitten (I don't think she feels very Japanese - derriere heart or no). Can't wait to see how the goose turns out.

Good luck finishing off your 'real' work with this calling to you in the background!

WOW!!! These are fantastic, G, I am so impressed with the speedy results - the rabbit and the blind flightless goose are my faves at the moment!

Wow, woman, you're good! You have a natural talent for this!

I visit your blog regularily and loooove your art! These little felted animals are so cute!

The heart on the kitten is a nice touch.

Wow G! these are really good, the cat looks really yours if you know what I mean.
P.x

These are beautiful, I have never done 'needle felting'I can see I may have to try it sometime!!!!

I have been hoping to see what you have been up to in your studio over the past few days...I couldn't quite see on your webcam.
These are just so cute...three D versions of your paintings:-)
Take care,
Alison x

you are so talented at everything you seem to do. these little felted animals are gorgeous.

fairly respectable? Oh my goodness they are just gorgeous!!

Wow, I totally love those! I've never heard of needle felting, now I have something new to google.
The idea for the crown and frock on the goose would look adorable!

Oh now you've got me going, these are just so very adorable, I want to have a go. Where on earth does one start?

They are wonderful! So full of life and character, and they've got my fingers itching to have a go at needle felting too, it sounds as though you've had that effect on lots of your readers/commenters!

I LOVE these....may I just say I LOVE these OMG! I have the needle and I have some roving....I don't know where to begin to make something 3D. Did you put something under it first...please tell me! I LOVE these Gretel...oh wait...I think I said that already!
XOXO

Captain Rupert and I love Mr Apricot, Captain Rupert would of invited him down the pub too for some rabbit compnay! and all your other creations, are great too. Look forward to you doing more.

These are Gorgeous! I agree that they remind me of your illustrations, even the colours. This is one of the few crafts I never tried in my crafty days of long ago.

I am smitten. I am in love.
You are not only an artist,
you are a felt fairy.
Where do hide your magic needle?

That rabbit is wonderful! Of course the other animals are too, but the rabbit does it for me...so much like your drawings and those ears are full of expression. :-)

I love the rabbit - just gorgeous. They are all lovely but the rabbit really makes me smile.

Obviously the bunny is gorgeous ... but I simply ADORE the goose ... I think she needs a crown ;-) Goosey seems very grand in deed!

Oh your fantastic at this ! I ca n't belive you've never done this before !

Theyare really beautifull ! It's a good idea to felting, they are simply too cute !

You are a a rare and exceptional talent!! I enjoy your blog so much.

gretel-these are absolutley brilliant! the goose is looking great so far. you look like you are having such fun with needle felting. i especially like the goose.dx.

What wonderful pictures you`re doing and now toys too! Love them all !!! I wish my computer as well as my connection were working better. I miss visiting here :)

Your felt animals are so lovely! They have such distinctive personalities--you really have a gift for felt work.

These animals are just wonderful...I have been wanting to have a go a felting myself - bought a book that sells supplies and now just need to find a little time to fit it in! I am told it takes quite a while but is so easy !?
Carol

I wish I could journey to rural Shropshire, I love your work!