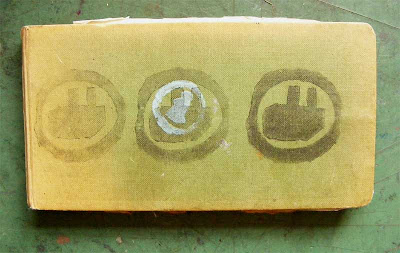 After another week of beating down the backbone of a deadline, I found myself idly flipping through an old sketch book, from my college days. I seem to remember Andy gave me this little old book, when it was blank- we both liked working in vintage accounts books. He stamped the boat logo on the front, from a handcut stamp. We had started living together in the second year of our design/illustration BA and were fired up creatively.This is now ancient history, 1992 - 1993. 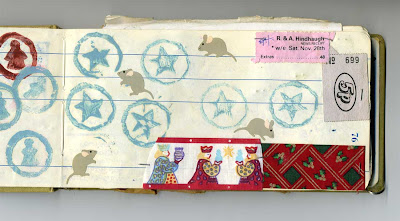 I crammed this little book (8 inches wide and four inches tall) with all the things which interested me - things found in the street, receipts and tickets, packaging, stickers - every graphically or typographically curious thing I discovered was stapled into this - and other books. The teapot illustation below is a photocopy of an illustration by Natasha. She was in our year and a friend, also an illustrator. Now she bakes the most amazing cakes - which are often illustrated, in edible inks, with her gorgeous work. I must have pinched or begged this copy from her - little did we know then how life would pan out, or that one Christmas she would send me some of her sublime gingerbread men. 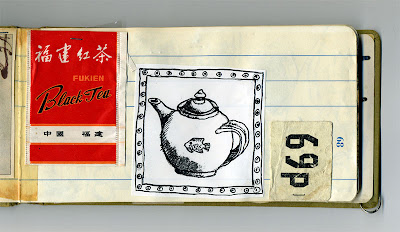 But I also filled it with tiny sketches in dip pen and watercolour - my *chalky* paints in my student box being the despair of one of my tutors.

Here, lovingly preserved at the top of the page, is a little shopping list which Andy must have written one day - 'Dog, New knee, Haircut'. I am sure he got the haircut, but his knee still plays up. 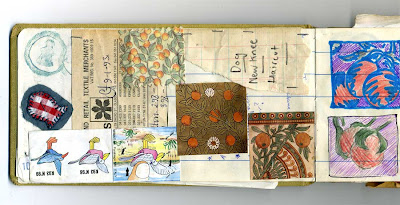 These are pre-scribbles and colour studies for a lino-cut I did one summer, when we were allowed to play in the print room. There are inspirational magazine cut outs and a tiny scrap of quilting fabric - all valuable planning I learned, which I still use today. 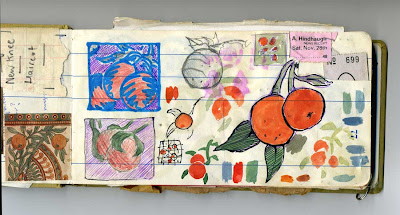 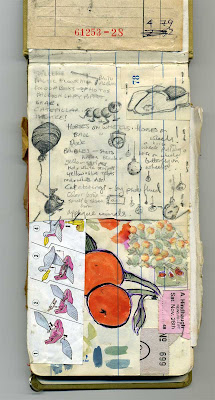 ...and here is one of the finished three colour prints, a bit rough and ready and slightly off registration. 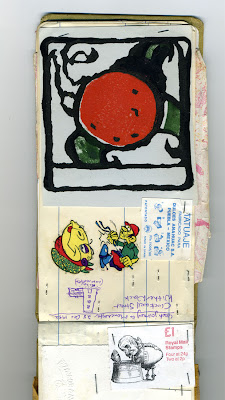 I seem to have had a *thing* with imaginary fishes - 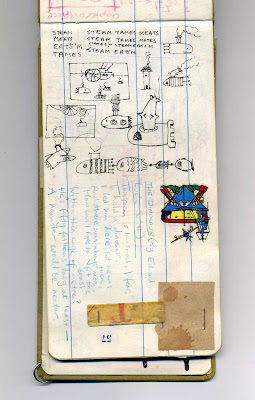 - though I also studied photos of real ones, to capture the essence of *fish* in my head. One of the regular things people say is 'oh I wish I could draw things straight out of my head'. But everything I draw has some basis, originally, in studies from life. 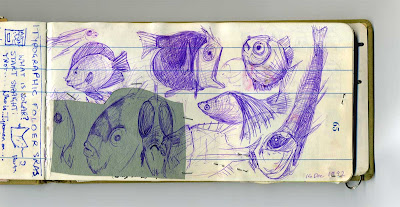 Andy hijacked my book and stamped his territory with one of his scary woodcuts. Not a very happy one. Hormones. 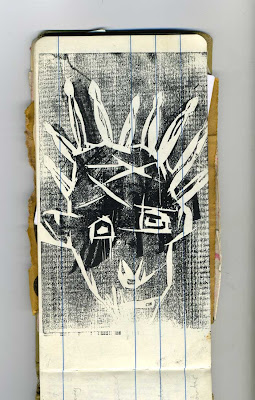 Mind you, I wasn't much better sometimes... 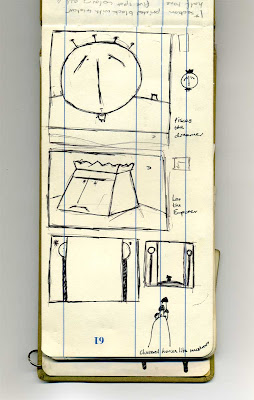 I also used my book for tedious lecture notes and here, a silk petal sprayed with a 'Tresor' sample. It used to be my favourite perfume, though I didn't have any, it was way beyond our student budgets. I popped into shops to have a little spray when we were in town. A few years later Andy bought me my own bottle, which I still have now. I didn't know then that perfume went 'off' and wish I hadn't been so frugal with it, but had just used it and enjoyed it. 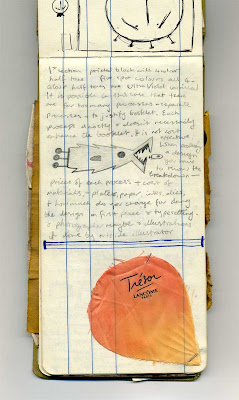 I am still inspired by many of the things captured in this memory book - much of it is seeped into my imagination and it leaks out when I create. Although a lot of my themes were abandoned over the years, as I developed as an illustrator and curbed my whimsy to become more commercial, things have swung full circle and now I am able to indulge myself again with my latest jobs - and this time I get paid! 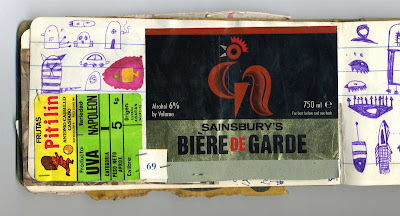 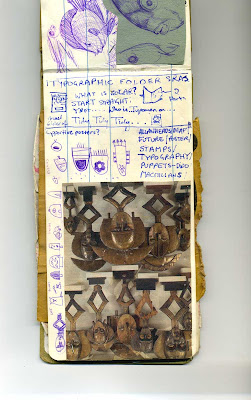 In the final year I was mixing textiles, embroidery and letterpress into my work. A bit radical in those days, as it was just on the cusp of the digital age and scanners were new, voodoo machines which only a few could use - or afford. Reproducing collaged artwork was usually too expensive to contemplate for book illustration Here is an old receipt from King's Fabrics. which seems remarkably cheap compared to today's fabric prices.

I found that I loved making detailed thumbnails for projects - and still do. I do so much planning in my tiny scribbles that things are usually sorted out there and then, so that the blow up is just a formality, as I 'know' where everything goes in my head. 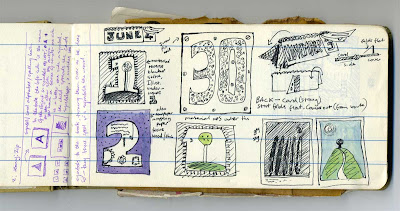 How I enjoyed dip-penning imaginary figures - usually on their own, or at the most, two. Often by a sickle moon. No change there then.

There are one or two James Reeve poems in there, with my feeble attempts to illustrate them. Many of his books were, of course, illustrated by my all time hero, Edward Ardizzone. 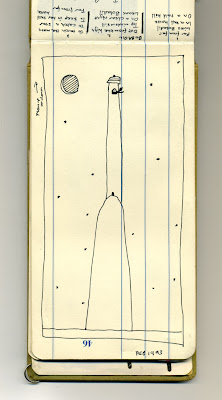 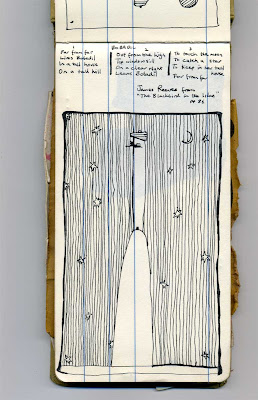 A book of four first class stamps for a pound! Watercolour paper samples and fake tattoos. 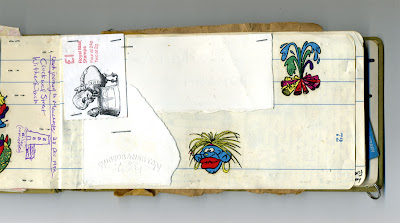 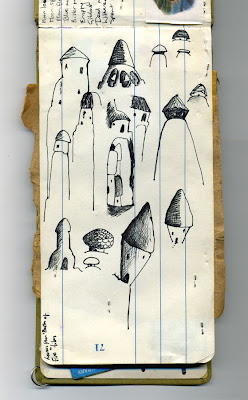 This will be a dull page, unless you are the one or two people who were at this college with me - my old Polytechnic library card, fixed in my book after we graduated. 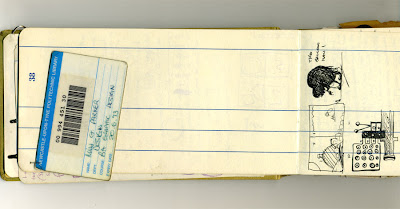 The lump of card seen poking out of the sides is a fat cat from a fruit box - an excellent source of graphic images, fruit crates and stickers. Remind me to show you my fruit sticker collection some day... 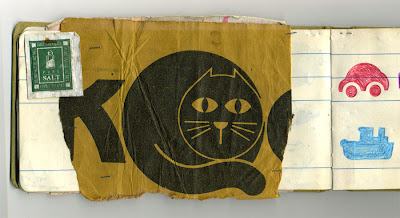 No, not that one- 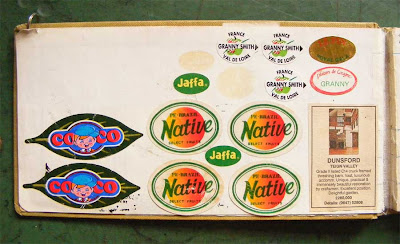 - the other one is far larger - in my BIG sketchbook!

Oh Gretel...I love it when you write this type of post. I get to know you a little bit better each time and I always come away with a smile! So glad you have kept this part of your past and I am convinced that someday you will be doodling a little sketch of a house that bears your name as it's owner. Looking forward to seeing the 'Big' sketchbook when you have more free time. Have a wonderful weekend my friend.
Janet
xox

An inspiration you are! Happy weekend, PG!

This is brilliant Gretel!
I remember your extensive and wonderful scrapbooks of visual reference :)
I wish I was a better sketch/scrapbook keeper.
And I doodle little houses too :)
Love to you both x R

Taking a walk down memory lane, how wonderful to have kept that little book. With each page you turn, memories come flooding back.
It's interesting to see how you have grown as an artist in that time.
Any little mice amongst all those sketches?

How delicious. It was a memory jolt for me too..I had the Tresor petal and a bottle of perfume. Precious too but I did manage to use all mine up.
A lovely post. Thank you.

So nice to see what came first! Good that you kept your little book of treasures.

I had the same Poly Library ticket, just rather earlier than you.

What a fabulous post, thank you for sharing that Gretel!
Penny.
x

this is one of my favorite posts ever!

what a master doodler/artist you are!

Fascinating stuff! I really enjoyed that little peek into your past, thank you :)

Absolutely wonderful post, what a delight! And I thought I had the only fruit sticker collection in the entire world. Sadly gone now though.

It's such a pleasure to look through your sketch book, following your story and explanations! Your "treasures", hidden in it, are amazing! I suppose some of them will inspire you in future... Thank you for sharing with us this emotional journey in the past!:-)

What a beautiful post and how fascinating. It's amazing what memories are jolted from funny things like shopping lists and doodles, I still have lots of scraps of paper and drawings that wouldn't mean much to anyone else but to me would be a whole chapter of emotions.

Very thought provoking - cricket this weekend? We have an unusual weekend off!!

It's a visual commonplace book--though the images together look very uncommon if you ask me--and it's fantastic stuff. Thanks for letting us take a peek.

Well, Gretel, here you are again being so very generous with your readers.

You are very kind to share this sketchbook. And very wise as a maturing/matured artist to be curious to have a look at what you were thinking about and collecting in your student days.

I really loved seeing these pages. Whenever I go to a museum exhibit that includes any artist's notebook/sketchbook, that is the part of the exhibit that immediately draws my attention.

Thank you! (Before I log off, I should also thank Andy for his contributions!) xo

Wow. This is fascinating.
I'm a house doodler as well!

Fascinating as always. Of course the fat cat is my fav. *wink*

Fantastic post Gretel and so interesting. Your life in a notebook. I have diaries a little like that, but far more random :)

Such a pleasure, thank you, Gretel

I love to take a sneak a peek in the other people's sketch books and yours is gorgeous.Thank you for the inspiration.

fascinating!! I've got lots of notebooks with nothing in them ..... now I have lots of ideas, thanks to this wonderful post!!

An extraordinary blog this time! I love it all and the memories that it brings back to me. I have the finished painting of the teapot on my wall. So thankyou for this insight!

It's so lovely to see your old sketchbooks, like peering into your creative mind. It's fascinating when you see recurrent themes isn't it? And quite reassuring too I think for some reason. :) x

You are bringing back memories! I still have all my sketch books from back then I wonder if there is a treasure from you tucked away in there?

This is a lovely thing - a very personal creative history with your combined notes, samples, sketches and paintings. Actually, it strikes me as being a very Rumer Goden/China Court type of treasury.

This is exactly the sort of sketchbook that I would have loved to produce, somehow I have never managed to keep one. Yours is a treasure. If there is any justice in this world and talent and hard work are rewarded in our society you deserve a little house of your very own.

Thank you for a really interesting and enjoyable post, I wish I had kept something like that. Sketch books are such a useful reference when you need to draw something 'off the top of your head', once you have drawn something it remains stored away in your memory. Very inspiring!

What a treasure your little book is - so many happy memories and little samples of your developing talents!!!!

This is so much more than an artists sketch book.... it is a memory map, a cultural artefact. I imagine an anthropologist, perhaps a hundred years from now,coming across your sketchbook and trying to determine what it was all about.
I wonder what he would make of it.

Your talent was just bursting through all those pages of your sketchbook. What a wonderful treasure to have and share with us.
Hope you are doing well my friend.
Sending you big hugs,

Gretel, I just love seeing this....how spectacular to have all these lovely memories. They are still inspiring. and what a treasure.:)
XOXO
Christy

I really enjoyed that Gretel. Thanks so much for sharing :)
It's wonderful to be able to look back at old ideas isn't it.
I must admit to having a little bit of a thing for noseying in sketchbooks.. :)

Thankyou ! I loved seeing every page and was sorry when we'd got to the end .

this is a beautiful little book :0))

I just LOVE this post so much that I read it and go over it over and over again!

Beautiful sketch book pages. There is a whole world going on in there. I love other people's sketch books, noting make me happier than having a nose, it's like taking the top of someone's head off and seeing that they are just as out there as you are.

And hats off to chalky pallets.