Not quite alone in the woods...

Saturday is usually a very good day to go to the woods. The village and surrounds become deserted as the Great British public indulge in their favourite pastime, shopping. I had intended to get on with some new work for my soon-to-be Etsy shop, but the lure of a clear blue sky and sunshine was too much. Grabbing my combat boots and fleece, I raced Hercules down the road and away to our local nature reserve. My prediction was wrong - there were several people in the front of the woods, shouting and 'coo-eeing' (bye-bye wildlife), but I quietly pottered away towards the back, and found myself blissfully alone. Moving stealthily through the pinewoods, I surprised a trio of hinds. They danced silently away in a graceful arc, and I rotated to watch them as they circled and disappeared. The woods may seem to be just another part of human territory, but as soon as you enter its environs, you are being watched and heard by myriad beady eyes and pricked ears. The forest folk know you are there, and you have little chance of seeing them unless you move as cautiously as they. The blackbird is nature's watchdog, and his alarm call warns all that a stranger is approaching - beware, beware!
Unless it is raining, I wear soft clothes - no tell tale anorak rustling - and tread firmly but softly, avoiding sticks. Every so often I stop stock still and just listen. After a few minutes, birds start to rustle about, and the life of the woodland starts up again. Stand there even longer and who knows what you may see? A fat rabbit scuttles across the path and a quicksilver squirrel abandons its fir cone and darts to the safety above. Look behind you - is there a small creature furtively creeping away from you, thinking your back is turned? A young buzzard cries its high pitched 'kai, kai', sweeping overhead like a young lord, and a pair of panicked wood pigeons flap clumsily in a flurry of stupidity.

Just as I was taking a homeward footpath. I heard a hollow drumming; a woodpecker. It was soon followed by a second and then a third - one higher, the other lower, the threesome sounding for all the world like a percussion band. Slowly heading in their direction, I noticed yet another deer, a solitary buck, much bulkier and camouflaged amid the trees. His stocky brown body was just about visible if you knew what you were looking at. But if not, he was just the dark space between the trunks. The drumming came and went. I stood still, and listened, scanning the treetops and was rewarded with a flash of brilliant scarlet - a Greater Spotted Woodpecker, crawling about the topmost branches, digging in the bark with its beak for insects. It seemed not to have seen me, and I watched it entranced, thrilled at this rare privilege. I did try to get a photo, but my little camera could only zoom in to this red smudge. 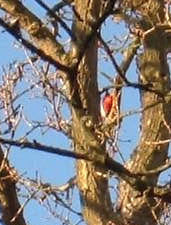 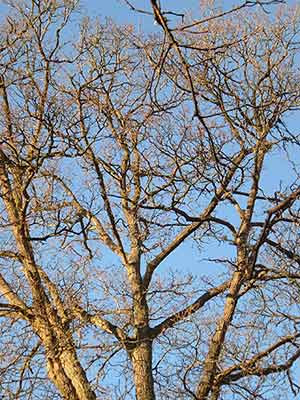 'it's in there somewhere...'
After about ten minutes it flew off. I moved on, trying to find the other two still tapping away, and couldn't believe my luck when I spotted another - and a few second later, it was joined by its' mate. If only I had brought the binoculars...the pair fluttered off and so did I. More of a slow splodge in the mud than a flutter, but still glowing with my afternoons' encounters - much more exciting than shopping. For more on this, see the post below.
Posted by Gretel at 19:57

Ah...thanks so much. I so enjoyed going on that lovely walk with you. Next time, I'll remember the binoculars and a flask of tea.

I can't get the top picture to load up ! But I can see the red spot on the smaller thumbnail !

Thankyou for sharing your very nice weirdness with us. I'm loving the picture of you painting your beautiful and sweet paintings to the accompaniment of murder and nastiness!

And I loved your woodland description, I've read it twice slowly. I'm so excited when we get new birds visiting our garden feeders - some times we even get a lesser spotted woodpecker, which seems very exotic in South London. And I love the sparrows.... Its all there even in London too, if you stand still and listen.

Barb, a flsk is a brilliant idea! I shall do that next time.
Andrew (hello!) I did delete and re-publish a post, and Blogger got into a tither about the photos, but I can see them both on my screen now.
Lettuce, Lesser Spotted's are exotic anywhere apparently, quite rare; I am almost envious (apart from the London bit ;)

Your writing is beautiful, I really felt as if I was in the woods with you. But if I had been you would certainly have missed the deer, my "woodcraft" skills are somewhat lacking.

I've been tagged by Pea and wrote six werid things about myself on my blog. I have tagged you and i hope you dont mind. Please write 6 weird things about you on your blog and then tag 6 new people, letting them know on their blog that you've tagged them and direct them to your blog for instructions. dxxx.

I love woodpeckers. They are gorgeous. I love hearing them too. What a lovely day for you. Thanks for the tag! hehe. I have so many more than six weird things about myself! I will get to it, I pomise! xo

Hi Ladysnail, yes, I've just done it on the post below.

Wonderful writing as usual. I haven't heard any woodpeckers down our way yet, but plenty come to the tree in the gargen to feed. I will make an effort to listen out this w/e.

Wonderful writing as usual. I have not heard any woodpeckers as yet but have seen plenty feeding in the garden. Will make an effort to hear them next w/e when I'm out with the dogs!

Mmmmm. Sounds lovely. We are too densely populated - I don't know *anywhere* in the vicinity that I could go to be alone. Would have to drive for quite a ways, and even then, it would be iffy...