In the end it was the Numptys who made their first journey to a publishers, not the seaside cats. One of the publishers with whom I'm working asked to look at any stories I was sending out, and so today they set off, with synopsis and the first very, very rough sketches. These are always the most exciting stage for me; they look so crude compared to the finished project, but it's such fun just to get the ideas out without worrying about appearances. It's like catching butterflies; exciting to chase, exhilarating to capture, but you have to resist the urge to nail them down or they become stiff and lifeless. No matter how elaborate the display case, they lose something precious.

I find that when I write a story I usually have a pretty clear idea of the world in which it is set. Although the text is very simple, the setting is what makes the story more than just a pretty little fable. Here are the basic ideas in the synopsis -

"... the setting...which is almost like an old fashioned toy theatre, with props and background. Things hang suspended from strings and wire – the Moon is a big pewter disc with rivets, the Sun appears to be a 1960’s ray clock. They both hang from the sky by cords attached to hooks, (although it is never seen what the hooks are screwed into. This is left as a kind of visual conundrum."

So the very first doodles show the girl polishing the moon by various means; a pole ladder, a pulley (suspended from some indefinable point beyond the page) and a trapeze. 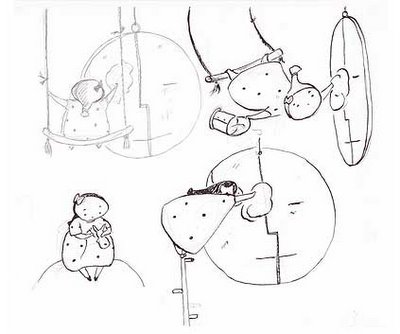 'Every month she polished the Moon and cut the Sun’s hair.'
"The planet itself is very small and simple, with just a few features – the lemonade fountain and the cake tree, which sprouts lovely fairy cakes iced in beautiful pastel shades...the background – the space in which the planet floats, changes from page to page, with flat vintage fabric/wallpaper style patterns..." 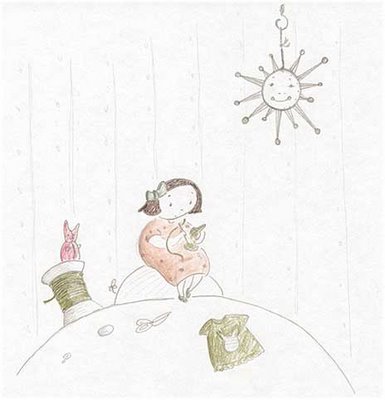 'She made two friends out of an old dress and called them Numpty One and Numpty Two'.

"...The first pictures show a landscape unadorned with anything except the cake tree etc. The girl has no house, but things appear and disappear as she needs them. The Numptys seem to accumulate quantities of clutter – they are untidy creatures and completely thoughtless. When the Numptys begin populating, more and more objects appear to litter the planet – little playgrounds for the baby Numptys, wee houses, tiny cars (they are proportionally to the girl about the same size as a guinea pig)." 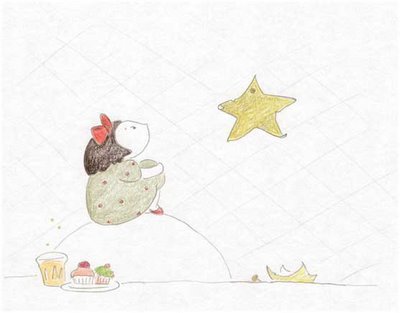 It was as if the Numptys had never existed. Except, of course, for the stars.
"...the stars, which the girl makes with the Numptys, are gold paper and stuck to the background with drawing pins. In the final picture they are peeling and a bit tatty – one has fallen to the ground."

If, God willing, 'The Numptys' is ever published, it will look light years away from these early scribblings. But I will try to resist pinning it to a display board.
Posted by Gretel at 21:20

Email ThisBlogThis!Share to TwitterShare to FacebookShare to Pinterest
Labels: the numptys

Great website you have here with loads of wonderful work. Glad I found it. Good luck with your story and I wish you all the best for getting it published.

Hi Gretel
Found your charming website while browsing other artist sites. Good luck on the Numptys!

Good luck to the Numptys on their sally forth into the big wide world. I'm sure the publishers will love them, congratulations Gretel on a beautiful story and illustrations!

I hate to appear sycophantic but I really am a fan of your particular style of illustration. Your control of watercolour and use of colour makes me think, if I was to take it up the medium again that's exactly how I'd aspire to paint. But as you are already so brilliant at it what would be the point. So thanks for saving the bother ;¬)

Publishers should be lining up to take on your appealing Numpty stories.

Thank you everyone! And thank you especially Chris, I have just been struggling with an artwork, so it was boosting to read your kind commments!

Your art makes my heart sing.

I look forward to any book of yours for two selfish reasons: first, so I can just HAVE it; second, so I can share it with my children.

I wish the Numptys a good journey and hope they will bring you joy. They seem a powerful pair, with good magic to them.

I love your numptys. The retro vintage references are right up my street too. You are so clever :-)