Early last Sunday morning I got that antsy 'I need to get out and right this very minute' feeling. So I did. For once the Sun was out and about and doing his job of making a nice summer's morning. The woods were empty of humankind, the balmy breeze fluttered the leaves, and tranquility reigned. Then a squirrel dropped its breakfast almost on my head, whether intentionally or not I don't know - I don't trust the little beggars. It was a half gnawed pine cone, still sticky and pungent with sap. Seconds later, a large rabbit, pot-size, lolloped heavily across the path and a few steps on, I found treasure... 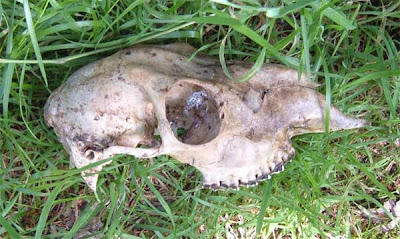 ...a roe deer skull. Lacking in its lower jaw, but still a Find. Even I wouldn't traipse around the woods carrying a moist, weather beaten skull in my hand, so I made it a handle from a beech twig - 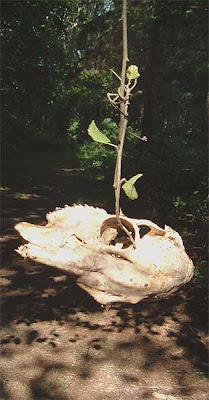 and continued my ramble. And that was it, really, a jolly nice walk in which nothing of of moment happened. Until I was rattling downhill on my way homewards and spotted a snake across my path. Snakes are so rare nowadays, and I haven't seen one for years. I screeched poor Hercules to a juddering halt and thrust him in the hedgerow while I scampered back to investigate. It wasn't moving. It looked asleep. I prodded it and decided that it was, alas, one very dead grass snake. But, still riches indeed. And only just killed, as it was in near perfect condition. 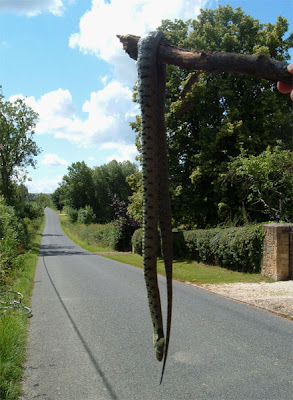 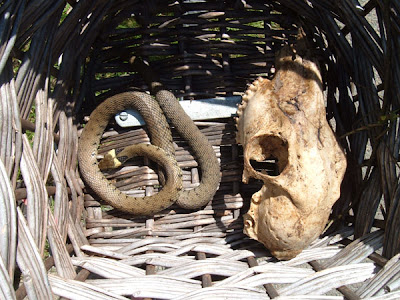 At home, having shown Andy my spoils, I measured it - 70 cm from tip to tail. 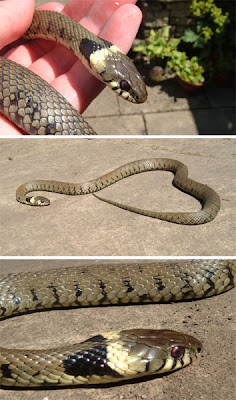 The only sign of injury was the bloodshot eyes. I noticed my hands had an odd smell after handling it, which I could only describe as 'snakey'. It would be wonderful if I could preserve the carcass, so I hung it, tail first, from the yard wall, in the sun; maybe the skin would dry round the skeleton. 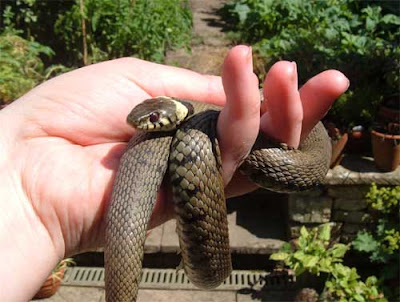 But the morning was creeping into afternoon and there was a cricket match to watch and play... 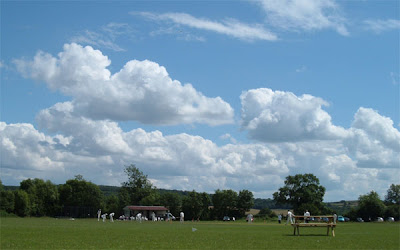 ...and the magical combination of Country Living, H.E Bates and a bottle of Old Speckled Hen to be enjoyed. 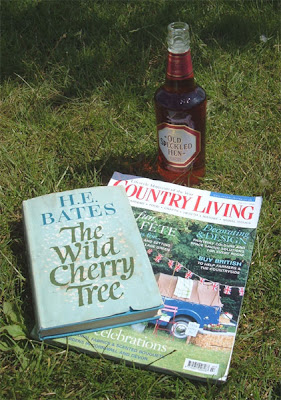 It was an OK game, if somewhat dull. Our team won, and we biked home in a soft summer's dusk through the back lanes.

Back at the Hovel, sounds of disgust were heard emanating from the yard. My snake was apparently a little high and there were reports of maggots. I didn't believe it myself, but for Andy's sanity I reluctantly let him bag it up and my poor snake had an ignomous burial in the wheely bin.

Sweet and sweet is their poisoned note,
The little snakes of silver throat,
In mossy skulls that nest and lie,
Ever singing "die, oh! die."

(from The Phantom-Wooer by Thomas Love Beddoes)
Posted by Gretel at 09:35

Wow - that's one big snake! And he doesn't even look very dead to me.

I've just caught up with your earlier blog, and was amazed to read your story. It's incredible what you've come through, and what a marvellous gift you have in your art. You write, draw and paint beautifully!

You must have looked like some kind of Shaman walking through the woods with the snake and the skull!

the skull in pic is deadly

Ah, summer cricket with a good book and a bottle of old speckled hen - sounds good. Poor old snake, you certainly must have eagle-eyes to have spotted him - he's beautifully camouflaged.

I remember the time we brought home a cow skull as children and spent the day brushing it with toothpaste and toothbrushes. It still smelled awful.

wow! that snake is gorgeous!!!

Poor snake. Sorry you had to dispose of the body. I have a naturalist friend who boils finds like that some how to remove all the 'juicy parts' so he can keep the skeletons perfectly preserved and together.

Love your art and your story. You are an inspiration!

Brave you, picking up the snake; I'd shudder even with it being dead. I wonder what killed it?
Glad your team won the cricket! :-)

Such a beautiful tale of a perfect summer's day!
I had to laugh out loud, imagining you, swinging that skull with the snake on the stick. *giggle*
I wouldn't have touched the snake, as a child I was followed once by two poisonous crossed vipers after accidentally exposing their nest with their young ones by rolling over a big stone (nobody ever believed me, but I clearly saw them following me, I swear it is true *g*). I do love frogs and toads dearly, though. Toads are my favorites, I once had a resident one, at least during winter, in one of my flower pots.

What great finds!! Poor Mr Snake though - what an unfortunate end. I always have a big smile when you post photo's of the countryside around you - it is so incredibly beautiful and refreshing to this 'city-dwelling-country-girl-at-heart'.

Lovely day in the countryside...I have just been sitting in the garden enjoying the sunshine, but now my kitchen is calling "declutter wanted" hmmmmmmmmmmmmmmmmm trouble with being on a mission is we must obey our callings! LOL!

Oh, what lovely finds! These remind me of my childhood, traipsing through the woods and the fields, finding treasures... and then a game of cricket (being American and having just read about the skull and the snake, I thought at first that you really meant crickets. Oops) a nice bottle of wine and a good book. All in all, a lovely day. That passage from Beddoews is a bit grim and mellowdramatic.

Breakfast on the head made me laugh! and I like your skull handle.
P.
xx

An artist sees beauty everywhere...
We were driving thru Texas once and I saw a huge dead rattler in the road. I wanted to stop and get him but DH would not stop no way no how. Now I see that was probably a good thing... LOL.
(( ))

Well ok, the deer skull...but the snake....the minute I read it was dead and still in tact the first thing I thought was "OH NO, she isn't going to make a snake stew?" LOL!
Truthfully I would have taken photos but not touched either...especially the snake. I'm a wimp.
You amaze me.
I love reading about your walks in the woods.
XOXO

Your pictures of the snake made it become quite alive! Great pictures.
I'm not much of a snake fan having got bitten by a black snake helping my Dad mow the hay when I was 12 or so. eeck.

I envy you your roe deear skull! I've got three sheep skulls which I've collected from walks in different parts of the country. One of them still had bits of 'matter' stuck to it, so I left it in the garden for about a year and then it was perfectly clean.

Just wondering - should you ever find another snake - I kept a pair of pheasants wings, plus legs and tail, wrapped in newspaper inside a plastic bag in the freezer for about five years. Largely cos I didn't know what to do with them.

Then I asked a lab technician about preserving them; she said that freeze drying was as good a way as any. Sure enough, they've been out of the freezer for years and they're fine - maybe this would work with a thinnish snake.

We've got a grass snake about a metre long living in our compost heap. This morning there was a grass snake about a foot long dead, with a big peck on the side of it. (probably attacked by our ginuea fowl.) Then there was one about 2 foot long curled up amongst a pile of wood chips by our lorry last week. The woodcutter even saw an adder a couple of weeks ago, and we haven't seen one of those for years - love Julia x

Your art and you blog are wonderful, such observation and interest in all that is around you, thank you for visiting Blossomcottage, and I will call again if I may.
Blossom

Northumberland (and our area in particular) is one of the last places to have adders - though I've never seen one, and wouldn't want to! My grandmother had sloe-worms in her garden, and little grass snakes too, which her cat, the devilish thing, would have fun 'playing' with - oh I don't like cats!

Whilst on a walk with my mother I found a sheep's skull, perfectly intact, and washed clean by a running stream. She had me pick it up and take it home, because she too is an artist and she liked to paint such things. She's got quite a motley collection now!

Have a lovely week :)

before the bit with the maggots, i was willing to bet that the bloodshot eyes indicated a very hung over, but still very alive snake. a bit too much schnapps perhaps.

all in all, good finds though.

Lovely walk - with treasure hunting being the best part! Alas, I rarely see anything skeletal or snakish in my very surburban walks hereabouts... A tiny bird skull once that was a victim of our cat... It was quite clean and fragile and I brought it in to the studio. Unfortunately the cat still claimed it apparently, because it disappeared shortly thereafter. (Can't imagine where she took it TO!)...