Well, that sort of thing, anyway. You notice it more as you get older. When you are young, you spend so much mental time and physical energy trying to get to an imagined point in your future, that you don't notice all the stuff that is happening to you, then one day you look back and your life is filled with so many coincidences and crossed threads that it's almost possible to see a vague pattern. I am speaking personally here. When I was 16 I left my rather unhappy foster home and set up on my own. That was 21 years ago. I've knocked about a bit since then and done/seen things that would surprise some of my friends, now that I am a 'respectable' illustrator. I don't regret much of it, but today I had one of those little moments, when it all nearly made sense.
I have an old blackened bookcase, which I rescued from a church shed when I had the job of mowing a village graveyard. But that's another story. I offered the vicar some cash for it, and he kindly said to just take it, as it was standing forgotten in a dusty corner of a stone outhouse, holding paintpots and unidentifiable containers of vintage goo, mostly to do with lawnmower engines and weed control. With a good clean and waxing the wood came up beautifully, a deep bitter chocolate colour. Since then it has held my bestest best books and other treasures. 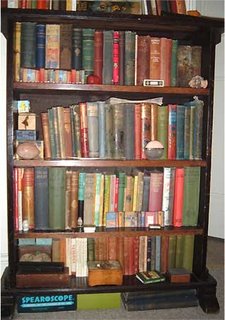 One of my precious things is that pinky-beige lump you can see in the top right hand shelf. It's my 'Joseph head'. I was mowing a neglected corner of the graveyard one summer's day in the mid-nineties, hitting stones and uncovering dead things, when the blades made a peculiarly soft crunching. I turned it off, flipped it over, and there, lying serenely in a nest of grass clippings, was the head. I brushed him down, kissed him, and stowed him safely in my pocket. I think he must have come from an old nativity set - he is carved from wood and exquisitely painted. There was something deliciously eerie about finding him, and I often wonder just how he got out there, separated from the rest of his body. And where the original set of figures is now. Maybe a village child 'borrowed' him to play with, and left him in the weeds. But - that's another story and one which I will never know the answer to. 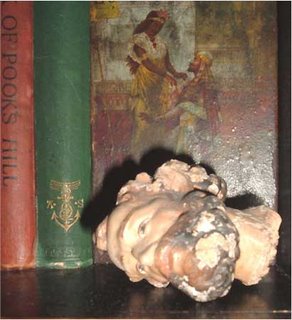 It was at this time I was trying to set up a nano-publishing company, the Tiddler Press (who's story really will have to wait for another day). With no savings, I was mowing the churchyard to fund the publishing of my first teeny-tiny book. When I had two or three printed, I managed to get a place in the pages of 'Country Living'. This brought me several mail order customers, who were quite lovely people - they wrote me long letters (before e-mail) and I wrote back. Some of them turned into friends, and I still correspond with them. One of them is an illustrator who would later go on to produce a popular series of fairy books, working under an art director I now know personally. In those days I knew her because she had an unusual name, and a few years before we were exhibiting at the same post graduate show. Her work was so stunning, that I never forgot her name, and kept her business card. When my illustrator friend wrote me that she was working for this AD, I had one of the 'moments'. I finally got to meet the AD last year, at a portfolio meeting and we found many other little crossed threads, including her young trainee who had recently graduated from my old design course...but I am digressing horribly. There is Reg, my paper cutting friend, who told me how few paper cutters there were in the country and the only one he knew was a chap who made a good living at parties hand cutting silhouette heads on the spot. A couple of years later, when I was on the village carnival committee, I spotted this portrait fellow in a catalogue of entertainers, and we hired him for the day. Mine was very flattering, not a hint of a double chin! Oh yes, and two years ago, I had a portfolio viewing at my publishers, and was introduced to a smiling lady with a knowing look in her eye. On being told her name I racked my memory for where I had heard it before...she, of course knew just who I was, and I finally remembered she had bought some books from me, and written the most beautiful letters with such distinctive calligraphy - and here we are in 2006, having just worked on the Princess's Handbook together - ten years on. I kept every single letter from those days, and I still am pleasantly surprised to see how many people wrote to me, and forget that it was supposed to be a business. It seemed more like a friendship club.
Finally, there was a someone who I know as Lindsay, but some regulars will know as 'Ash'. We lost contact a few years ago, and then recently we found each other again, through the magic of the internet. When I was still working in the graveyard , she and her husband dropped in to see us on their way to a holiday, giving me a gorgeous tapestry mirror of her own making. And eggs. Lovely big, fresh eggs, I can still see the fat yolks sitting firm and upright in spitting butter...is it lunchtime yet? Which, in a very meandering way, brings me to my 'moment' this morning. Here is the wood quail with the broken beak on which I hang my bits of jewelry, which sits on top of the bookcase. 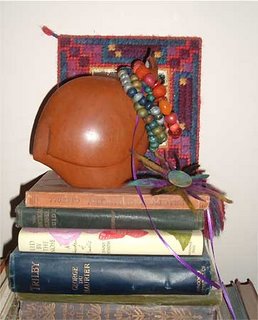 It's one of those 'I'll just leave it there for the moment' areas. And there behind the bird is the mirror which Lindsay/Ash gave me. There are my favourite bracelets which Toby and Penny gave me and the brooch they made for my birthday. There is a purple ribbon from the parcel which Tara sent me, (who now knows 'Ash' through the blogworld) and who also understands that the universe works in mysterious ways. All these miscellaneous bits of past, present and future, all linked up in little ways. So many degrees of separation. Today I saw ten years of my life summed up in one simple bookcase.

Hi G, I've only just realised, since starting our blog, how nice it is when people leave comments, I often look at blogs and have decided to leave some messages from now on!
I have had Middle of Nowhere on my favourites for ages and really look forward to seeing your work and photos and finding lots of new and interesting things.
Thank you!
P.

That was a lovely story about your bookcase- I felt like somebody was reading it to me!

It sounds as if you have a magical bookcase!

A very special bookcase. Its interesting how life weaves its path and I love the story you tell it tells.

Thankyou so much for putting a picture of Dylan on your blog. Sorry I was not up to leaving a comment I had seriously blurry eyes!

How neat is all that? I love how many of our lives and interests and interactions combine and intersect in surprising and meaningful ways. What a lovely description of it all....

I also love the combination of Synchronicity *with* Serendipity. While I feel synchronicity is perhaps more 'purposeful', serendipity seems to be the force or spirit that brings unexpected joy in the most unlikely places - as long, as you say, we have eyes to see...

Oh YES. Syncronicity or coincedencs has ruled my life, I love it and all its mysterious little twists and turns, like finding you, my imaginary friend, all is well when we go with the flow, grab the chances that are layed before us. ( I think I have reverted to spelling old english, too much wine tonight!)

Gretel that is a wonderful story, it's wonderful to find treasures like that..When we gave our garden a make-over in london we found littl tresures as It had never been done before, it still had the original victorian path with borders...Your illustrations are beautiful....

Lovely stories, Gretel. As time goes on I'm more and more convinced that things and people happen for a reason, and so do the threads and ribbons that run through our lives!

Mmmmm I do love things like this. Gives me a litle tingle to think of the tenuous threads that link us all. Isn't the internet a wonderful thing? I love your bookcase and all your little treasures.

I loved reading your stories Gretel :) After todays news (Lebanon) its so heart warming to read the above and through your words, remember what life is all about and how the universe works its miracles...

Gretel, you are such a sweetie to remember the eggs and to still have the mirror - it seems both ages and no time ago. You are right about these things only registering with us as we get older, I am sure, as gradually everything becomes more precious.
It was finding your blog that got me started with the Ash one and I have found some great sites through yours. Thank you! Lindsay aka Ash