Deadline gone and buried. Hello freedom...narry a decent walk since Christmas and I was finally free to tramp the byways of our small patch of Paradise. The sky was a screaming cold blue, as if it were in competition with the Sun for brightness. It was only a small walk...up and out the village, risking life and limb on the twisty road, round which car drivers like to test their steering skills at sixty miles an hour. Then onto a quiet back lane, perfectly straight and lined at regular intervals with nice tidy trees. 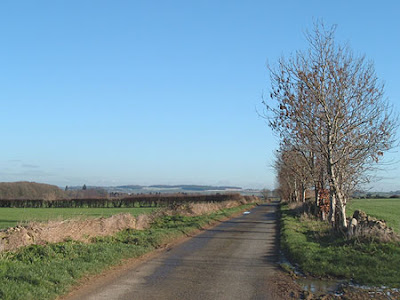 From a distance it is visible for miles, instantly recognisable as looking like a child's' drawing of lollipop trees parading along the landscape. If I have had a rare trip to town, it is the first thing I look for as the homeward bus heaves itself over the brow of the steep hill before plunging back into the valley. For a few brief seconds there are the most spectacular views of the Cotswolds, panoramic in breadth and on a clear day, the Malvern Hills can be seen at the back, just creeping into visibility.

Some way down it there is a footpath leading back to the village. This was my humble goal, completing a brisk two mile walk before lunch. I found what I thought looked very much like the path, albeit without the usual signpost. I never do trust landowners to keep their public footpath signs in order, and I'm sure some of them would be greatly delighted if 'ordinary folks' stopped crossing their land, due to lack of pointers. Halfway down the track, I realised I was in the Wrong Place. The copse to my right should have been on my left, and the track seemed unused and overgrown. Turning back toward the road I remembered that some of the fields had set aside strips of winter fodder, and I had probably wandered down one of these, as there were plenty of dead seedbearing crops around, including some delightfully dessicated sunflowers. So naturally I stopped to take a few photos... 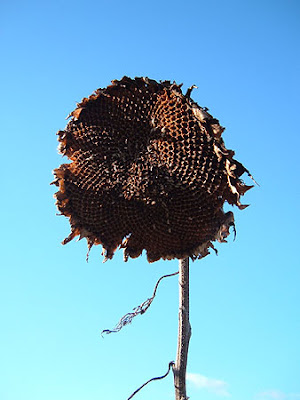 Returning to the road I spotted a sad little notice, collapsed from its stake, the plastic covered A4 sheet of paper blackened from ink runs and mud. It lay in a puddle, the message obliterated. The remains of an officious sign which ordered people not to venture into the field as it was a cover for game birds - I'd seen it last year, and the anarchist in me had instantly wanted to trespass...now I had done it inadvertently. I am generally careful to keep to paths, hoping that in the 21st century I will not be harassed by some swollen headed landlord for putting one foot wrong on their precious property.

A green Land Rover cruised slowly past and disappeared down the road. Minutes later, as I was heading towards the real footpath, it came up behind me and slowed to a halt. In the back trailer, hanging from a bar, swayed a few brace of pheasant. Naturally. Not many, but then, the season is almost over, and anything that hasn't been killed by now is canny enough to evade the guns. Inside were two tweedy gamekeepers. Wedged into the passenger seat, a jolly looking round faced chappie and at the wheel, a slab of cold humanity, Hatchet Face. He didn't even look at me. Jolly Round Face leaned over and enquired - in fairly friendly tones - if 'I knew I was walking through game fodder'. (Actually, I was walking alongside it, and there were no birds to scare anyway...being, as I said, dead or hiding). To which, being confident of my innocence, I replied 'yes I did know, and that is why I turned back', explaining briefly that I had mistaken it for the proper footpath over the way, pointing to the relevant hedge. Hatchet Face didn't blink, but Jolly Round Face seemed to accept this, and refrained from interrogating me anymore. I had a feeling that if it was down to Hatchet Face I would have found myself hanging with the birds in the back trailer, a garrote of orange bailer twine twisted round my neck. They drove off and I found the footpath, complete with helpful signpost. 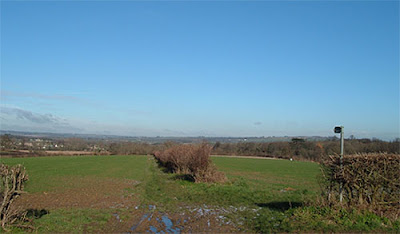 It wasn't a particularly nasty confrontation, but it did niggle me. That they had been watching me. Did they see me taking photos of the sunflowers and think I was some kind of arty nut, idly dilly-dallying where I shouldn't have been? Lordy - even worse - did they see me wiping my cold wet nose on the back of my sleeve...that would have been shameful. It niggled me that they had come all the way back round with the intention of ticking me off - because if I hadn't answered so briskly and honestly, they would, I'm sure, have subjected me to a patronising lecture. Then I realised that I had probably been the most exciting thing to happen to them all day, bar blasting the bejabers out of the last pheasants in the county. And then I saw a tiny buff brown wren lacing its way through the silver grey fretwork of the bare hawthorn hedge. And a muddy black and white spaniel woffled up to say hello. And I realised I was jolly hungry, and there were more important things in life. Like tea and toast.
Posted by Gretel at 15:36

I wonder if you've had snow to add to that beautiful landscape?

The picture of the sunflower is stunning.

Ya just can't even take a walk without people bothering you...People are nervy. Glad they left you alone.

Love that picture of the sunflower.

You missed a keyword off your labels list at the end of this post that should read "Tossers". I think you kept a very cool head - I'd have gone very red in the face and mumbled incoherently - I don't deal well with confrontations. Still, at the end of the day the views, the fresh air, the wonderful sunflower head and the tiny wren all compensate for the pettiness of a couple of 'field police' and you definitely got it right about the importance of tea and toast!

There's just no reading your posts quickly...every word is a treat to be savoured slowly. It's more like I'm watching a video of the actual events than reading about them...would that some of the authors I read have such talent!

I agree, beautiful photo of sunflower, love it!

Wonder what you are up to workwise now, any personal projects?

Tuned into Archers, first time in a while last week, has Jack been replaced by a different person? voice didnt sound right to me.
P.
xx

I do find footpaths/bridle paths rather difficult to determine in open countryside and hate traipsing across the farmers fields wondering if I've got it rigt. My kids long to be able to say "Ger orf my land" to someone and I'm pretty sure that when they are joking about this they have visions of waving a shotgun as well! Alas no land.

I had a run in with a game keeper once but he turned out friendly. We arrived up at the Yorkshire Moors late at night and looked for a suitable place to hide a tent. Eventually after Kimball drove his golf of raod we found a spot at the end of a track. It was a little scary becuase there where some poeple out lamping. In the morning we just started to take down the tent and the game keeper turned up in his plus fours. Luckily he did not mind probably helped we had started packing up. He was more annoyed people had been out lamping. Glad your deadline is over and you can enjoy some fresh air. I have just worked out how much coal is for the rayburn you would not have any envy. Tried burning wood when I was down there yesterday with the ghimney sweep and carpet fitter but that did not really heat it up as much.

I was completely enthralled and fascinated by your entire tale of your walk. (so glad you were freed from the studio at last) The way you write is as brilliant as your illustrations. The nerve of those ba-----s talking to you the way they did.
Your photos are fantastic, I always love being able to see what you see on your walks/bike rides.
XOXO

Julie is right in her comment of "tossers". It must be something about all gamekeekers, I've never met a happy one. They're all dodgy or creepy in someway, no sense of humour and that cold nasty empty look they have. I have had many a verbal with our gamekeeper, so he now keeps his distance from me. Stand up to them, it's the best way!

Pah! You're so right, you WERE the most exciting thing to happen to them all day - they probably lie in wait for hapless ramblers who happen upon the wrong track. Beautiful writing, as ever - shall I pop down next week for a cuppa? I'll email you!!

I love it when you tell stories like this. Your style of writing makes me feel like I'm right there with you, instead of trudging along filthy Chicago streets, I'm on a country lane! Thank you for sharing this.

Thanks for leaving a comment on my blog. We like a lot of the same music and movies.
You write so well, I enjoy reading your posts. Glad you got to go on a walk and wrote such a beautiful lament.

Don't talk to me about gamekeepers, in my opinion and experience they shouldn't be allowed near other people. Love your writings, Bob.