Most of today has been spent working up a final sketch for a very late commission. I rarely do these, mainly because (as in this case) it often proves to be a problematic. But this was for an old friend, and I feel badly that the baby for whom it was intended has since entered this world and is still waiting for her nursery picture.
This morning I finished a sheet of roughs for the 'girly handbook.' This great project has really brought home the importance of collecting as much source material as possible, throughout one's life. Over the decades I have picked up hundreds of books, many of them simply a blind investment for 'future reference'. Here is a pile I'm using at the moment. 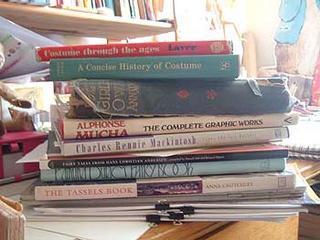 It includes a tatty copy of 'Girl's Own Annual' from 1929, bought about 21 years ago for a fiver. The illustrations in it have been a constant source of inspiration for me, and no doubt have contributed to the 'old world' feel of my work. Then there's the Mucha book - I was about 16 when I bought this, and had never heard of him (or many artists for that matter). Rarely used in over 20 years, until recently, when it has been key in my sourcing for art nouveau style. The top two books I picked up from table top sales, both history of costume books - invaluable and used often. 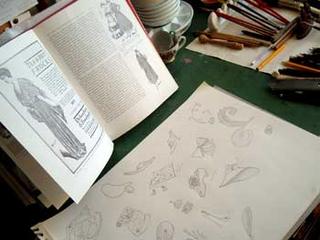 Sheet of roughs and source book 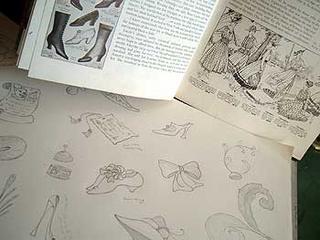 Using the material for inspiration and details.

The Charles Rennie Mackintosh book was given me two years ago by someone who was having a clear out. I almost sold it, but recently, like the Mucha, it came into its own. And two fairy story books, one a cheap repro of Dulac's fairy stories, the other similarly illustrated by assorted early twentieth century artists; Rackham, etc. Again, these help me with the kind of atmosphere I am creating.

I often use Google images for reference material, but nothing can beat the authenticity of a book from the right period - the paper, the printing - little contemporary bits of ephemera hidden away between the pages, dried flowers from the second world war - even the smell...these cannot be reproduced via the internet. All my life I've picked up books from jumble sales, charity shops, remaindered stores - often people just give me books, knowing they'll find a good home. It's been a wise investment, even if the hovel does resemble an overcrowded bookshop.
Posted by Gretel at 17:24

I have an encycopedia of fashion that helped me so much... it looks just like the drawings you have! I google too but you are right... there's nothing like a book!