A couple of months ago I was given a quantity of letterpress equipment and two small presses (well, one was given, and I exchanged a painting for the other). A lovely gentleman wanted shut of it, but it needed to go to a good home. I heard about it through the grapevine and within minutes had bagsied it. Andy's parents were kind enough to lug it all down from the North, and their car just about survived...we unpacked the two presses, one 8x5 Adana, one (phenomenally heavy) hand proof press, four full size trays of typefaces, (Gill San and Times) and some empty ones, a little cabinet of small type, (more Gill, Times, Spartan and some yummy 14pt Rockwell Shadow) a bundle of print magazines, various vital odds and sods, boxes of this and that, quoins, chases and other mysterious gizmos and I looked at it all and thought - oh dear...

It may seem somewhat reckless, considering that we live in an already overcrowded small workman's cottage - but I have waited a long time to be able to have my own printing studio, even if that means fitting it into the everyday fabric of our limited living space...I soon had it tidied away and part of the 'furniture', if you will pardon the pun (nerdy type joke). Actually, if I am in confession mode, I have been collecting random bits of type and woodblock for some time, with the vague dream that I might be able to use them eventually. Some people have a shoe habit. I have a letterpress habit. It's cheaper and more fun. 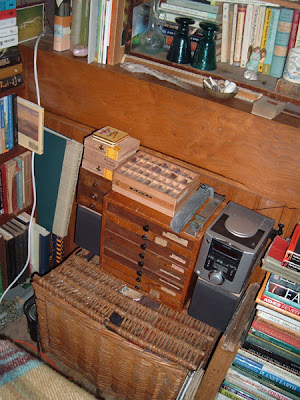 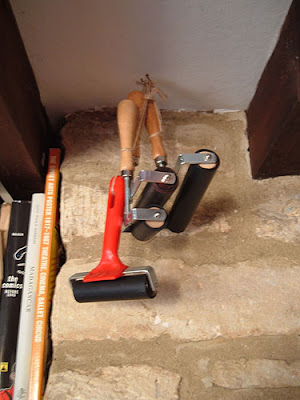 Actually, I think my Adana looks rather picturesque sat in the window, next to the slow ripening tomatoes. (On the elm table which is also in the window because I bought it for a tenner and then didn't know where to put it...) 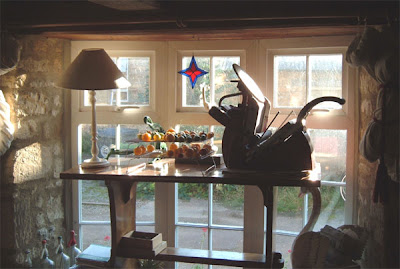 But I have not had time to play with my toys - it's the usual thing of making time, and I haven't done any typesetting since 1993. Last night I realised that Andy's late shifts were the perfect time to take over the downstairs room, where my bits and bobs are stored. So I began hauling it out from various hiding places...although the proof press, on the table, is now a permanent fixture and when it is not in use, we put two bowls of fruit on it. (Seen here on the hearth in the background). 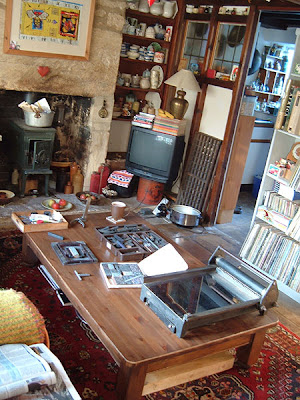 I intended to start something simple. Maybe some Christmas tags for my Etsy shop, using these newly acquired blocks, one of the best bargains I have ever had on eBay. 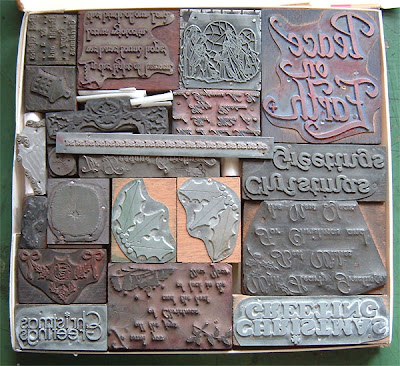 So I started with an easy 2 bit design which took mere minutes to be locked in and ready to go...(in case you were wondering about the rather poor joke earlier, the blocks which fill in the gaps are called 'furniture) 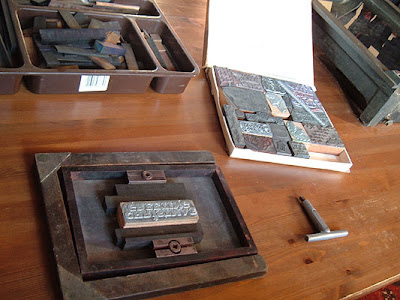 For a couple of hours I fiddled about with the Adana, but couldn't get a clean print. I stuffed bits of card under different bits, wedged the platen with extra wadding and rearranged the blocks. But for whatever reason, although the press was working sweetly, I couldn't get a decent result. So I moved on to the proof press, which, unlike the Adana would give me indentation as well as printing. 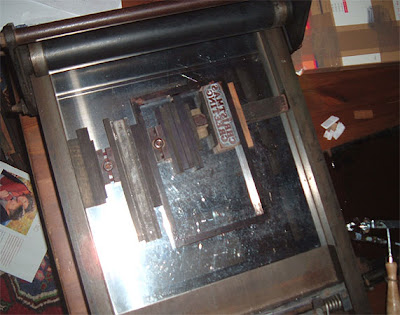 Using an old catalogue as a pad, I finally got an acceptable result. The only drawback is that the blocks have to be hand inked with a roller. However I seem to have retained a few basic skills from my younger days, and this proved to be no problem after a few gos. There is something rather wonderful about bringing dormant type back to life. By the time Andy was home, everything was put back to bed and the room smelled vaguely of white spirit. 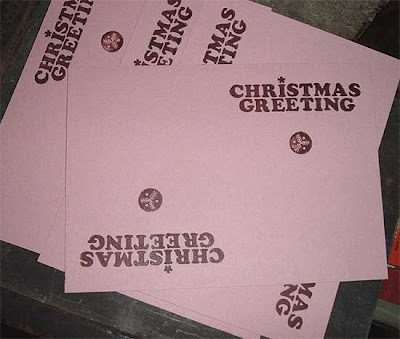 Today, when they were dry, I snipped, sliced and clipped until they resembled more or less respectable tags. Then I realised I hadn't got a good hole punch...I have since found one on eBay, but with rampant postal strikes bringing small businesses to their knees, I don't expect it to arrive for over a week. (I have also learned not to use the Adana on the coffee table, because it gouges big scratches in it...oops...) 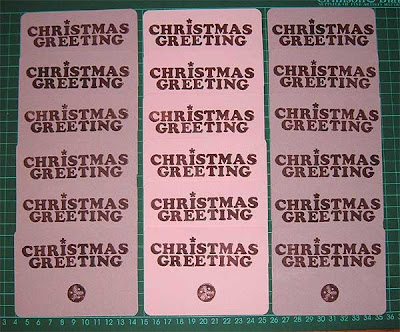 And a singular Christmas Greeting to you too. (No, I don't know why the left creator of this block the 's' off either).

'Anonymous' G, I thought you'd enjoy that, and would be one of the few to get my little pun :)

The adana looks great in the window. It resembles and mirrors the wooden swan that was there before it!

OH! can't wait to see all of the beautiful things you will create now! This sounds like a real labor of love.

I'd love to come to play with all your printing stuff. Years ago my granddad was a typewetter for the dealy mail and he always smelt of ink and white spirit.

This looks like loads of fun. Glad someone else's house is packed to the brim with books and interesting 'stuff'!

Hi PG,
Lovely as always. Saved the plumcake recipe to look at later.
stop by my new blog
http://totalsales.blogspot.com/
see you soon!

Glad you have got printing, its all looks wonderful.

All your furniture looks as if has always been there. Right in its place. Wunderful that those presses have found such a good home with you. :-)

Sounds like you've been having a great time and the results of all of your hard work (and coffee table gouging) are brilliant!

Oh boy... now you've got yourself a hobby! And I thought my wife's weaving loom was a lot of 'hobby equipment'! LOL!

That looks like great fun... now just to find those long lost William Morris type bits and you'll be off to the races.

I'm always dreaming about silkscreen printing... but never have tried it.

I'm so glad you're actually getting to play with your delightful 'toys' Gretel! I'm feeling a bit jealous and itching to do something a bit more tactile... Maybe next year...?

Your prints are divine - I love old typefaces and typesets. I remember the enormous print press we had at school and some nasty lad putting his fingers in it and rolling.. Good luck making more - I predict they will sell like hot cakes!

So interesting....and I love the Christmas Greeting...can't wait to see what else you do with your new treasures.

Oh! That DOES look like Christmas at your place. Merry Christmas! Now you get to play with your toys and we get to watch your blog for the new creations.

Wow, what a haul you got! You are going to have some kind of fun now. Can't wait to see some results.

Wowzers. Your collection of printing equipment looks amazing. Love those tags, too, even with the bizarre single greeting!(Well, it is an expensive time of year, I suppose. Can't go round giving more then one greeting to everybody, you know. ;))

That looks like lots of fun!!!! I look forward to following your progress!!!

Forgot to mention during my last visit here, that your putting "Christmas" in a blog post on October 6 really sent a jolt through my bones. Am I late again this year with my Christmas cards? Should I finally all those I wrote and put a stamp on and then never posted?
Then again:
When is a good time to write Christmas cards? Should I really go ahead and send them now in October? October surprise? Ha! I might just go ahead ... :-)))

How exciting! It looks a lot of fun, but also quite a challenge. Bravo Gretel for getting such wonderful results.

Never mind your best eBay bargain, this may be my best eBay sale -- you don't usually get to see what fun the purchaser is having and I'm really glad you're enjoying it.

Watch out for that 'type habit', though -- it may be cheaper than shoes but it's a LOT heavier!

Hello! I have tagged you for a 'desktop meme'! Instructions via my blog....
x

Oh wow, Gretel! After having been 'incommunicado' for a week, I look at your blog and see all that wonderful gear you've been telling me about. I'm sooo envious! (I got the furniture joke, too!) Isn't the bed of your proof press shiny! Mine's going to get another scrub with WD40.
I'm dying to get printing again, but due to recent circumstances it's been impossible. Not for much longer though...you're a bloomin' inspiration and it's you who got me to get my wood engraving kit out of the attic in the first place! Take a bow, missus! ;-)

Oh I love the pictures of your room, it looks so cosy, and happy. I use to live in a 2 up 2 down cottage built originally for tin plate workers in 1910. I loved that house so much. I live in a late 1950's early 1960's bungalow now which isn't me at all. However I do love the mountain that we are on, the quiet, and the fact i have no direct neighbours so never feel obliged to clean and tidy my house, as only my friends ever see it !

The feature on your snowflake will be posted tomorrow (10/30) if you'd like to take a look.

What lot of memories coming flooding back - I did typography as part of my graphics course yearsandyearsandyearsago. Lots of playing with type - it you wanted letters on a page there was no alternative then but to set them. (and diss them afterwards)

Then world changed when I spent the next few years having babies...it was all computers when I was ready to re-enter the workforce.

Hi Gretel
Just having a morning browse through your blog and I have just realised (brain still numb from gardening in sub zero temps yesterday) that I nearly bid on these blocks..
Glad they went to a good and talented home!
Michelex
P.s Indulge and enjoy today!