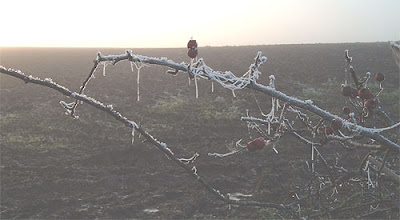 We are engulfed by freezing fog. With our village being situated in a valley it's like being smothered in an icy soup. Poor Andy is working right up until Christmas Eve night and yesterday was the last opportunity we had for getting a few festive bits and pieces in. I raided the Red Flannel Elephant petty cash, and we headed up the hill towards Stow-on-the-Wold, where the sun was breaking through and we carefully pootled along, the only motorbike out on the roads. When the weather is nice, you can barely move for fair-weather bikers on their shiny, under-used machines, togged out in nice matching leathers and spiffy helmets. They usually ignore us, in our tatty gear, although it is considered polite to nod at other passing bikers. They would have found yesterday a bit difficult, I think.
We made it to town safely. I spent the last of my pennies on a modest amount of cheese and wine, feeling some what bemused at the amounts of consumables being crammed into overflowing trolleys - is the world coming to an end? Are the shops shutting for a month? How many crisps and chocolates is it possible to consume without bursting? Reeling slightly from the rare foray into civilization, we togged up again and set off home. Up on the Stow road, there are magnificent views across the Cotswolds, and today we were looking down into an ethereal kingdom, wreathed in mists. Unwisely, and just as the fairytales tell you not to do, we took the bike off the main road and into the back lanes...

...it was quite stunning. And quite lethal. Carefully turning a sharp corner, we hit a deep patch of icy sludge. Thanks to Andy's years of driving in adverse conditions and his presence of mind, we slowly veered into the middle of the road, falling sideways onto the freezing mud. This is otherwise known as 'dropping the bike'. The bike was alright - it was cushioned by us. Andy scrambled off, and I lay, like a fallen tin soldier, partially astride my fallen mount. It's a big Honda Varadero, and weighs more than I do. Stunned, my first thoughts were; Andy's ok, he's walking about. I'm ok, I can feel everything. Oh bugger, did the wine survive? Still on my side and under the bike, I glanced to the tank bag, where our precious bottles of wine were about to cascade out onto the unforgiving tarmac. With my right arm free, I was able to gently slide them back in, and made sure the bag was rescued before disentangling myself.

First thing to do was to haul the Honda up, and get it out of any oncoming traffic, although in the end only two other vehicles passed us, unconcerned at our plight. Andy had been stabbed by the foot pedal as we toppled over and I'd turned my weak ankle again. The rest of my body was feeling a bit crushed too. We decided that Andy would take the rest of the shopping home, and I would begin walking until he came back for me. 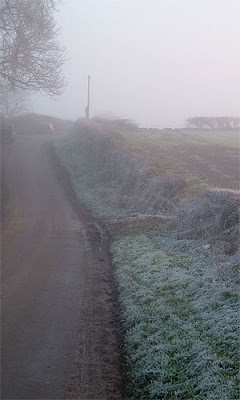 I had been wanting to take some photos anyway, so I was quite content to limp along, admiring the scenery, thanking God that we'd had such a lucky escape. Just as my hands were starting to freeze, I heard the familiar chuntling of our poor old jalopy, and was soon home and esconced on the sofa with tea and Chelsea buns. 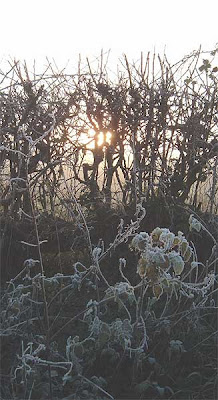 Miraculously, the only real casualties were a smashed packet of Hovis cheese biscuits, one egg and Andy's nice corduroy trousers; the foot pedal not only gave him a nasty dig in the leg, it ripped the bottom part of his best trews too. I have plenty of interesting bruises, minor whiplash, and feel as if I've been trampled by baby elephants. And I'm hobbling. But both of us are safe and alive. Really, it could have been a lot worse.

We might have lost the wine.
Posted by Gretel at 07:13

Glad your ok and no wine was spilt. I can't see the other side of the garden for the fog, but I love all the white crisp branches.

What a nasty tumble! Glad you`re both okay and hope all the bruises and scrapes mend soon. It sure looks muddy there! Hope you have a wonderful Christmas. Enjoy so much seeing where you live and reading your posts. Even with all the mud, it still looks beautiful.

Gosh Gretel....so glad to hear that you and Andy are alright. Its so dangerous on these roads right now. Hope you enjoyed your chelsea buns and that wine will taste all the sweeter for having escaped a roadside smashing. xx

Dear Gretel,
I am so very glad you are safe. Hope you get through the next couple of days without too much discomfort. Maybe that is where the wine is going to come in handy.lol

Your pictures are beautiful.

Take care of yourself and Happy Holidays.
Hugs,
Connie

Glad you're relatively ok after your spill. I've been there too having spent many years riding pillion on a Honda CBR 1000 (affectionately knicknamed the ballistic sofa). We took a tumble in an especially deep patch of gravel - luckily also at slow speed but embarrassingly right infront of a party of hikers who all turned to see the spectacle of us scrambling out from underneath it. Glad to hear your wine survived too, you obviously have your priorities right! Thanks for the great pictures of the countryside around you - it's so beautiful at this time of year - albeit not too bike-friendly! Have a great Christmas x

Thank goodness the wine was safe you must now go home and sit at the fire and slowly consume glasses of wine till you are over the shock, that is what Dr Extroardinare daisy Lupin prescribes.

Aw, thank you everyone - Julie, I am very glad there was no one there to see us!

The wine is safely hidden in a corner now. ;0)

Oh my gosh! You sure are fortunate. Sorry about the bumps and bruises and hobbling about though. At least the wine was saved as you say! You have such a good attitude, and we're glad you had your camera too! Simpley breathtaking. xoxo

phew, what a relief!

seriously tho, I am glad you are ok.


These are spectacular photos. I'm rather regretting that we aren't getting decent frost in London yet.

Thanks so much for the card, that was very sweet of you. Everyone has LOVED your Red Elephant cards.

Thank God the wine was safe!! and you too! What an adventure. Your pictures are amazingly stunning, so something good came out of it! Glad your snug at home now! Merry Christmas!

So sorry Gretel! No fun! (although the photos of the countryside are beautiful). Dr Tara prescribes some long, hot soaks in the tub with Epson salts and ginger. Calendula and arnica too if you have them.

Big hugs and be good to yourselves!

Ooooooh Gretel I'm so glad you and Andy are ok. Not a nice time of year to be on 2 wheels. Take care honey x

So glad the wine was okay, oh and you and Andy. This weather is so beautiful to look at and to photograph, but can be so dicey too, take care and have a warm cosy Christmas.

Have a great Christmas Gretel - thanks for the lovely card.
Love & best wishes
-Gail XX

I am SO glad it all turned out all right, but it was some adventure! And yet, the beauty you found in it - the photos and your writing. This is one of the reasons I love to come here to your corner of the virtual world -- that you see past the soft edges into the sharp beauty of everything. Not rose-tinted, mind...

I wish you and Andy a very happy, warm and beautiful Christmas. Without further mishaps to yourselves or your wine.

Its been a real pea souper here for the past couple to days. So glad that you both got away without major hurts. Hope those bruises get better soon. Enjoy the wine and have a very merry Christmas.
Carolyn
PS
I've never managed to find out how much chocolate one can eat before bursting, I'm still trying!

My first thought after I'd stopped choking on my mouthful of tea from the sudden burst of laughter (and spitting it all over the computer monitor) was, "Bloody hell, if I hadn't started blogging just over a year ago, I never would have found my way to you and your incredible writing." I hope there's a book in there somewhere!

Oh blimey, you do like to live dangerously, old fruit!! I am SO glad that neither of you was seriously injured; if you need me to do a mercy run with a food parcel, just say the word!!! Beautiful photos, as always; glad the wine was not a casualty.

You're quite amazing to saunter down the road taking photos just after a nasty spill like that ... hope you are feeling better ... Merry Christmas!

Nothing like taking the scenic route. It is where all of the good adventures are. Have a very Merry Christmas.!!!

Lady, this whole darn blog is a book waiting to happen...I'm very happy to hear that the spill on the bike didn't result in any bad injury and that the wine was safe ( what would the holidays be without wine??)...I read your blog and think, I would SO buy a book about your life and adventures. A book with your photos and commentary where you root for the people in it...

I had intimate experience of the freezing fog, as I was trying to find a cottage in an unmarked road in the middle of nowhere in Bucks on the evening of the 22nd!

I'm glad it's gone away now though