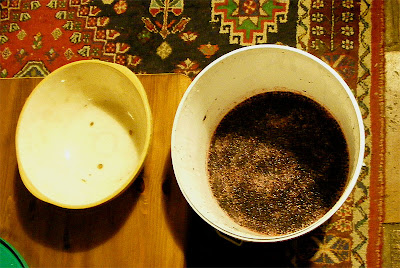 It is a truth universally acknowledged, that I am rubbish at making wine - this, despite 30 years of trying. Camden tablets, squeaky clean vessels, racking off, yes, yes and yes. And still I have failed to make anything which could be drunk - enjoyably - on its own, without added water and sugar. (Because obviously, we are not going to let it go to waste). So I am trying again, and throwing the rule book out of the window. I am going to make an old-school country wine, with no flim-flammery. My big bag of de-stalked elderberries, picked on our last walk, was left in a large fermenting bucket, covered with hot water and left to steep for a few days. With a handful of cloves added, for luck. They started doing the business on their own, and were soon fizzing away on a natural ferment - and, a little alarmingly, a bit of natural mould scumming the top. 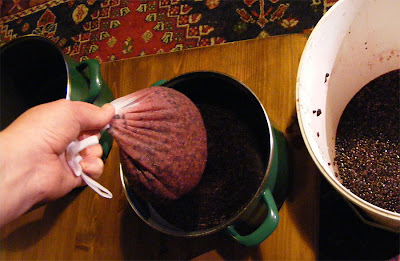 Time to strain the berries off. The only thing suitable I had was a small jelly bag. This was OK, as our kitchen is smaller than most people's loos - no room to swing a cat, let alone do major wine pouring - so it all had to be decanted into a motley assortment of pans. Aerating, I believe it is called. Monty's Vineyard was on the TV as I gently squeezed and sploshed, and I felt as if I was in good company. 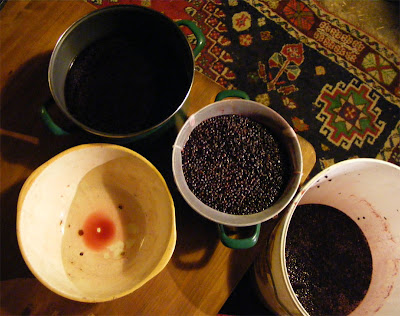 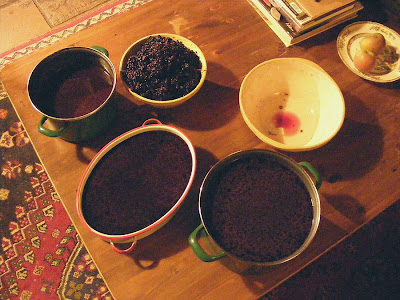 There was a horrid moment when I thought I had found a large, juice soaked maggot, but it turned out to be a clove. When I had scrubbed the bucket out, the only-slightly-scummy juices went back in, topped up with more hot water and a wallop of granulated sugar. Just to give it a bit of encouragement, I activated some Allinson's yeast - usually used in my bread, but in my old recipes it does just say 'yeast' - no Burgundy yeast or anything fancy-pants like that. (I did hunt around for my old bottle of Camden tablets, but they seem to have vanished). 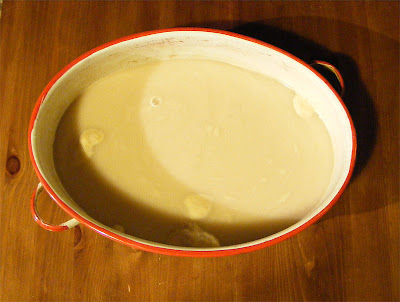 And back to its corner it went. Three gallons of what should be elderberry wine. Storage space in our tiny cottage is at a premium - there is none to speak of. So my wine sits next to my vinyl record collection and in front of two five foot columns of old 'Country Living' (and my crash helmet lurking in the background). 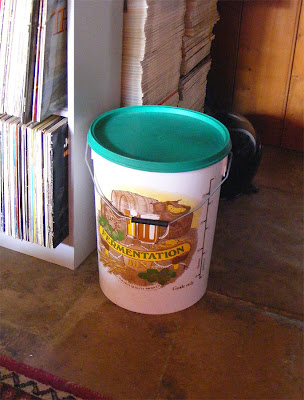 It's in good company though, as just across the way is Andy's little keg of home brew, sitting comfortably next to my big sack of needle felting wool, which is there because, yes, there is nowhere else for it to go. 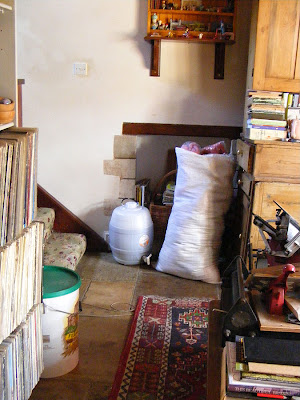 So far, it smells (kind of) like wine - it looks like wine- but only time and the Gods will reveal whether it can raise itself above its lowly beginnings. We will probably drink it regardless.
Posted by Gretel at 18:17

Good luck :~D Certainly having it in a container labeled "fermentation" should dispel any doubts the baby wine might have as to it's proper behavior.

We tried to make our own wine, but were met with dismal failure . . . I'm hoping for success. Also, I'm glad I'm not the only person who saves every issue of certain magazines; I've got a stack of cooking mags that I just can't bear to part with . . .

What an interesting process - I hope it goes well and turns into a good drop or wine ;-)

Thanks for you comment about my needle felted dog (he's one of my favourites too and is based on a toy dog I remember having as a child). Also thanks for adding me to your links ;-)

I used to make wine country style & I think your sitting room is to warm. Room temp should be a consistent 50 -55 degrees Fahrenheint

Sounds like an interesting process Gretel, I remember trying to make a variety of concoctions (none of which could be said tasted nice), but it was fun.

As per the above comment, there may be an optimum fermentation temperature for both the wine and the beer.

One trick is to get your hands on an old fish tank heater, fill up the laundry tub with water, set the temperature control on the heater to 35deC, insert the fermentation vessel and leave for two weeks. The only draw back with this method is that you can't use the laundry tub for two weeks. Oh well, priorities in life, clean clothes or optimum fermentation temperature.
Good luck, I hope it tastes nice.

Oooh, that looks so yummy, I'm sure it will work. But the secret to success that I've found is in the airlock, when you rack it off to do it's final stuff. Make sure absolutely no air can get in, and you should be ok. You do very well in a tight space :)

Hi Lorna - I wish our sitting room were too warm, but with no central heating and a tiny woodburner, it is probably too cool - but at least with thick walls and stone floor is at least consistently too cool!

Ross, our landlord's washing machine is so old it doesn't even HAVE 35 degrees on it! And it leaks...not that I wouldn't be happy to choose wine over laundry.

Ah well, it's still fizzing away, so we shall see.

Yummy! We used to make lots of homemade wine as we had blackcurrant and gooseberry bushes in the garden. The blackcurrant wine was especially potent......the result of one batch is sitting downstairs now with his girlfriend! You have been warned! ;-)

Does the crash helmet have anything to do with the expected result of the wine?!

I hope it works!

The post has given me some hope - I didn't think we had the space to make wine, but perhaps I could squeeze some in somewhere :)

Wishing you luck with your brews and wines. Feeling very sympathetic and empathetic re space at home.

Yet ... just have to say again ... your out of doors is magnificent! There is nothing like that anywhere near here.

Your so brave, and such a hard worker! I wish you the best of luck,
may there be great elderberry wine!

Here in Austria, the grape juice, after 3-5 days of fermenting, is called a "Sturm" ("storm", I guess the name comes from all the activity going on in the barrel). Sturm is quite a pleasant drink, maybe you should try a little bit of your elderberry's? ;-)

I wish you luck, I have never succeeded, it's very hard to rival Oddbins!

Oh my that sounds like a lot of trouble. I sure hope it turns out well for you. I think it is a very interesting process...it is so easy to take things for granted and where or how they are made.

Thanks for sharing.
Hope you are doing well.
Hugs,

Before I read the bit at the end I was thinking to myself I could smell it! Good luck with the end result.x

my best-ever homemade wine was elderberry - i hope yours is a success!

a bit of mould never bothered me too much....

and if its a bit dodgy, you can always mull it!

You make wine from wild berries? Gretel, you never cease to amaze me. If I was ever washed up on a deserted island with one other person, I’d choose you as my companion. We’d survive, and you’d entertain me as well. Perhaps that could be the new reality show: Gourmet Survivor. Gordan Ramsey and you could judge it.

Do you have wine yet? What a cool project:) We've made beer but never wine. Good luck!