We're well into the season now, and games are played under a vast expanse of blue sky and hot sun. Our new field, tucked away down a country lane, is of generous proportions. It is a broad sun trap, with little shade, and it will be a good 150 years before the oak saplings are mature enough to offer decent cover. 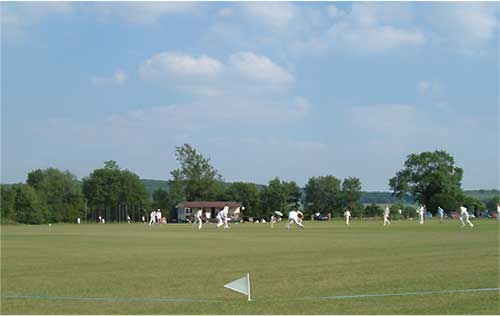 It's a complicated story as to why Andy plays for another village several miles away, but he does, and has done for nearly ten years. So unless I go on the motorbike with him, and watch the whole game from start to finish, I follow later in the day. It takes two bus journeys and a mile walk to get to the field, laden with rucksack, bike leather and helmet. But bearable, with Oxfordshire blooming so prettily. 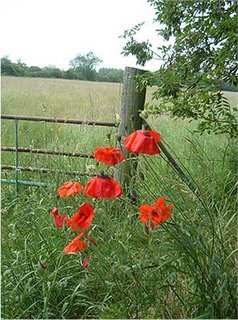 Our team were fielding when I arrived...

I retreated under the verandah of the pavilion, with a large flask of water. Tea was held just before five. Everyone queues nicely and helps themselves. This one was particularly splendid. 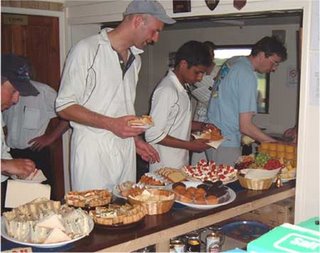 A note on tea, for non-cricketing friends at home and overseas. It is Very. Important. Team honour hangs on it. One of the first questions a new arrival at the game will ask - after 'what's the score?' will be 'what was tea like?' If 'shop cakes' is the answer, then there is a sad shaking of the head. Homemade is the watchword. Sandwiches should be fresh, and at least four varieties, nothing fancy - egg, ham, cheese, tuna. Mini pork pies and/or sausage rolls. Scones, of course, quiche if you're being posh, about three types of cakes (home baked, as we've ascertained, one should be fruitcake and lemon drizzle always goes down well), crisps, maybe some fancy biscuits, squash (always orange) and, because this is the most British of sports, played in summer, a huge urn of hot tea. Andy had just got to the bottom of a well laden plate of food, when his team captain wandered over and asked if he'd open the batting. He had ten minutes to digest it all before his energetic stint on the frontline...

Meanwhile, I was catching up with old friends, strolling round the boundary and keeping half an eye on the game. We ended up sitting in the late afternoon sun, me with a bottle of Fiddler's Elbow, breathing in the heady musk of elderblossom, watching cottonseed drift by. I thought of my friend Tara, with her fondness for 'air decorations'. How she would have enjoyed the scene, the idle chatter and the surrounding green fields and woodland. A buzzard languidly swept circles overhead, probably wondering what the strange little white figures on his hunting ground were doing. Back to the game...Andy was eventually out for 26, hard fought for, as the other team were very tight in their fielding and bowling. Despite some exuberant and entertaining batting from some of the younger team members, we lost. The teams came in as the sun sank below the horizon, everybody clapped everybody and shook hands with each other, like a slightly confused folk dance.

Later, we all decamped to the pub, for much game deconstruction, where we caught sight of a hummingbird hawkmoth plundering the valerian. Swifts and swallows screamed high in the dusky sky, the balmy air scented heavily with honeysuckle and rose.
Posted by Gretel at 13:32

Oh my goodness what a perfect perfect day, and all that lovely food, I love egg and cress sandwishes and scones and cake and of course washed down with cups of tea... I see you're a cancerian like me...

Aahhh...Im all home sick now, and the tea sounded wonderful, thanks Gretal for that little bit of England on a Sunday afternoon.

Hi G, my that team made my mouth water! The teas in these parts are very very poor and traditionally it is the same lady that has always done it. I did the one when E came to play but all the others are shop (not even nice ones) bought cakes and spam sandwiches-and very small portions!!! I'm sure she must make a profit.. wish you were here. Mx PS P lost today too.

Sounds wonderful... and all that teacake looks scrumptious. Just the thing for a lazy summer afternoon.

I guess little league soccer is about the closest we have to that here. No tea and cakes there... just standing around in a freezing fall rain usually.

The description of the tea was mouthwatering! I occasionally try out the few tea houses in the area - but they so pale in comparison! (Americans can't do tea!) I'm excited when I can find good scones.

What a perfect summers day. The tea looks truly yummy. I'm a bit worried we drove right into one of those humming bird moths and it went splat on the car window screen. I tried to warn k but it was too late. It seemed to have a blue somewhere on it so maybe it was something different as the link picture is not blue.

Mmmmmmm lovely lovely. British summertime at its best, sunshine, cricket, cakes and tea. What more could one ask? I used to work for Somerset County Cricket Club in the days of Joel Garner, Ian Botham and Viv Richards. It was an exciting time in cricket and I grew to love the game.

You paint such a lovely pcture with your words ... it sounds lovely ;)

All that's missing is Inspector Morse and Lewis... LOL!

I loved how Inspector Morse would always drone out Lewis's name.... "Leeeeewwwwwiiiiisssss!!"