Good things that have happened. My first Disney 'final roughs' have been very much approved of. This is a huge relief. As with anything Disney, it is vital that I adhere to the original design; that it is instantly recognisable. Some artists would probably hate this - a curtailment of their freedom of expression or some such nonsense. I like it. It's a challenge and I've been cribbing from Disney sketches for years anyway! I am being allowed a few of my own tiny touches, while being watched over and guided by one of their official artists, who is a far far greater draughtsman than I could ever hope to be. But something to aspire to.

Another good thing - I have sold 'Moon on a Stick' and 'The Numptys' to a nice person in America. These little creatures are going to get to New York before I do. I think the silly Numptys may get a bit scared in the commotion of the plane - but I shall leave a small gap in the bubble wrap so that the girl and her cat can crawl in with them and keep them company. Perhaps use the moon to light up the parcel.


Yesterday I took delivery of 'Illustration' magazine, a wonderful new publication now in its second year. This is the first UK publication totally dedicated to this much neglected art - anyone with any interest in this field should get hold of a copy. Or better still, subscribe.


Today I've been working on bits and bobs - I've produced 3 sheets of accessories for the 'Girly Giftbook' - even Barbie would be satisfied. The large private commission is stretched and ready for it's first proper colour. And I've finished another small picture. I had real problems mixing up the right kind of dingy orange to go with the dull green background - as can be seen here with the different bowls of colour. The clothes catalogue is Boden - they use such gorgeous colour ranges that I often 'borrow' their schemes. Some more paintings sold and I may be able to buy the jumper I've been hankering after... 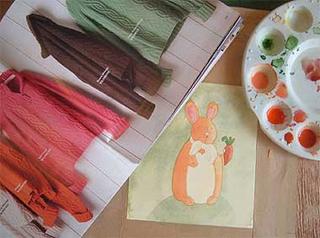 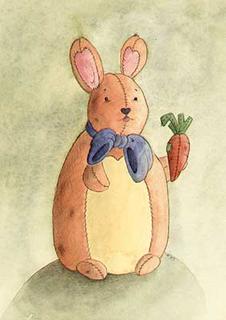 Anyone who thinks that artists should be 100% self sufficient in their work should read Vasari (I think it was), who advised all would be artists to go and copy the great masters. A bit more of that and maybe more of our young art graduates would be able to produce decent artwork. At the moment a lot of it seems to be a triumph of style over technique. That's my grumpy old git rant for the week.
Posted by Gretel at 16:41

I have a collection of boden catalogues and a huge library of Country Living Magazine for reference.

It is wonderful to see that you are doing so well and juggling so many projects at once!

I'm looking forward to seeing the work you have been doing for Disney- is it going to be years and years until we see any of it?

Interesting quote from Vasari- I do spend a lot of time drooling at other artist's children's books but apart from one painting in the national gallery, I'm not really into Art. (although I do love a bit of photography). *please speak to me again, even though I admitted to that*.

Congrats on selling the Numpties and Moon on a stick!!.. (fer gawd's sake...tell me you sold them for more than you mentioned at greetings card group!?)

Can you say what you're doing for Uncle Walt?

Sorry chaps, can't, can't absolutely can't say what I'm doing with/for Uncle Walt...wait till February and all will be revealed.

Lorna - that's so funny - you are are a Country Living junkie too! I have piles of them...and their lesser cousins - Period Living, House and Gardens etc. I wonder if Boden know they're such useful artist reference manuals!

Goth - moon on a stick IS one of those little 30 pounds one, sorry, and the Numptys were 55 unframed. (It's not very big - they would fit on a sheet of A4). And I can now get in a winter wood supply! Alas no Boden jumper yet.

I'm going to start doing more ambitous pieces, and raising my prices a bit, but I'm happy to be selling my work at all. And it's flattering that people want to buy them at all...

Oooo... I have done work for Period Living magazine and they were very friendly chaps- great to work with.

Great to read all this (well-deserved) good news! And you definitely got the colour right in the end on Mr Apricot. When I'm rich and famous I'll buy lots of your work :)

Mr. Apricot seems perfect. The orange is good, though I think its the blue bow thats brightening up the picture!

Thank you Ed! That's lots of Boden jumpers to look forward to then! ;)