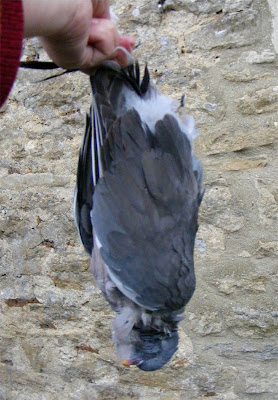 We find the roads can often be a useful pantry, if you keep your eyes open. Out on a cycle ride, Andy found this dear little wood pigeon, killed cleanly by a car - all feathers and not much meat. But nice plump breasts, which he removed for us, donating a few bits and bobs to the Gingers, who were circling around waiting for their share of the spoils. Pumpkin likes to pretend he likes grown up things like this, but he doesn't really enjoy them. Clover, our darling girl, goes quite feral and snarls over her meat like a tigress with a freshly killed antelope. 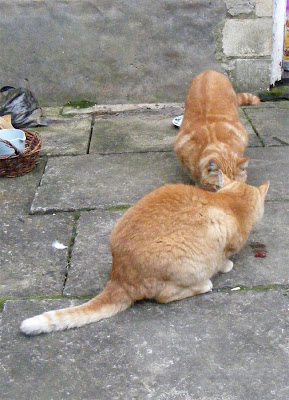 When we returned from our late summer forage, with blackberries and parasol mushrooms, I began putting together a little supper of 'found food'. The pigeon breasts were marinaded in olive oil, Maldon salt and fresh lemon thyme, following - more or less - this recipe by Mr Fearnley-Whittingstall. 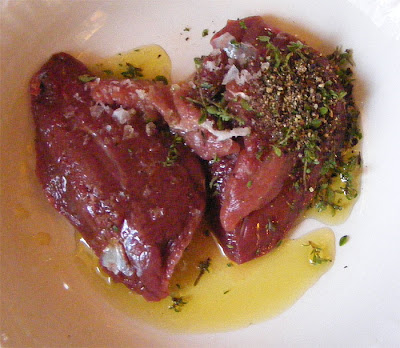 Meanwhile I made a blackberry crumble, substituting muesli for the usual plain oats, which worked beautifully. The shaggy parasols were grilled in olive oil - 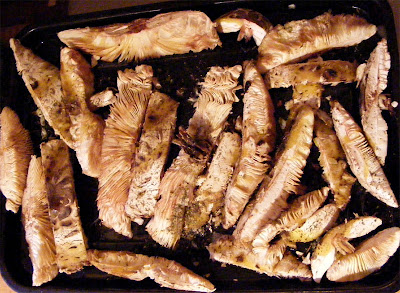 - and the pigeon breasts lightly fried with added balsamic vinegar. Andy picked some of the last of our garden salad, in the twilight; the evenings are drawing in and the wood burner back in use. 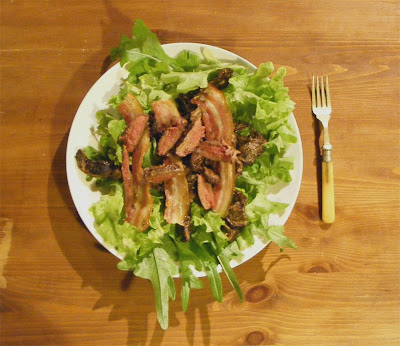 Neither of us have had pigeon breast before, but it was quite delicious, rather livery in flavour and flavoured more like a red meat than a bird. Definitely worth picking up again. We certainly couldn't afford to eat this kind of meal in a restaurant, but there was much satisfaction in gathering most of our supper for virtually nothing. 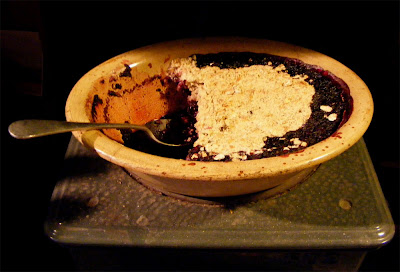 How coincidental! After years of trying to find River Cottage tv shows on the Internet, L obligingly tracked it down, and this morning we watched episode 1 of Escape to River Cottage--in which he prepares a pigeon! (though in a Moroccan manner)

Such succulent foraged splendor!
Wonderful to read, I felt myself transported to your table. Thank you for sharing your extraordinary meal with us! :-)

Your post made me laugh as my mum and dad) eat masses of pigeon as a friend of a friend offloads them onto them.Poor Dad has to be ready to sort them out at any given moment, usually precisely when mum is putting dinner on the table.
The countryside where you live is stunning.

I do like the theory of eating a pigeon but I know with my sensibilities I wouldn't be able too - probably.
Since falling in love with my goldfish I no longer enjoy eating fish....how pathetic is that?

I think I could eat a country sort of pigeon, but wouldn't want to gnaw the city cousin...Crumble looks scrumptious.

As an ex-veggie I couldn't possibly eat this, I'm too much of a ninny but I've got to tell you, I can understand the thrill of putting this exotic meal together without the intervention of the modern age. I'm well impressed!x

Gretel your description is a wonder and your photos ad that finishing touch.
Your such a talented lass!

Have you ever heard of Euell Gibbons? He was big into gathering wild food to eat-- my grandmother was a fan. When I was a kid we used to dig up onion grass and make "soup." You might find him interesting. :-)

Your meal sounds delicious, and you're right, it would cost a packet in a restaurant. There's so much pleasure to be gained from providing for yourself. I used to shrink from the thought of road kill, but believe me, I've changed! I think that cleaning and dressing the pheasants did that for me :)
It's also handy that Andy is so tall, so that he can get the fruit that's too high for everyone else ;)

I love how you foraged your meal. That list image of dessert could be a painting.