When I was seven or eight, I bought a vivid magenta pink beret from a jumble sale. In retrospect it was probably quite alarming in colour, but it was made from soft angora wool and I considered it beautiful. I wore it constantly for a while; my mum was great about things like that. In fact, as our mutual wardrobes consisted of jumble sale finds and hand-me-downs, I have few (if any) memories of going into high street clothes shops for the latest fashions. (Which is probably why I am somewhat lacks-a-daisical in my dress sense now). The pink beret disappeared with the majority of my belongings when my parents died and near-relatives took matters into their own hands. When I left my foster home, four years later, I started wearing a beret again. I think it must have been a kind of security blanket, although I didn't realise it at the time - I just liked berets. I had a red one, which I practically lived in, and a black one, as I thought I was an anarchist. I'm about sixteen/seventeen here, living in my first bedsit. Looking at these old photos with fresh eyes, I am a bit shocked at how skinny my arms are, though I remember I was hungry a lot of the time. The dole money didn't stretch very far and I had a tendency to fritter away the little I had in charity shops, finding second-hand treasures to fill my life with.

Plus ca change. The middle picture was taken seconds after I had found an old cookery book in a bin (you can just see it in my hands). Naturally I rescued it. Not only was it a book, but it was very similar to my mother's cookbook, from where she did most of her baking, including the Christmas cake. Another way of trying to reconstruct my lost past. From then on I clung on to my possessions fiercely, determined never to have them ripped from me again. In fact, it is full of very good recipes, despite its plain appearance and I still use it now, over and above all my others. 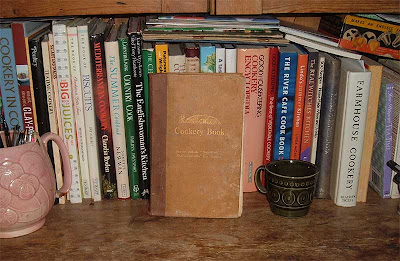 I haven't worn a beret for years, not since I met Andy. But I still have a fondness for them, so I gave my newest creation , Petit Jaune, his very own. 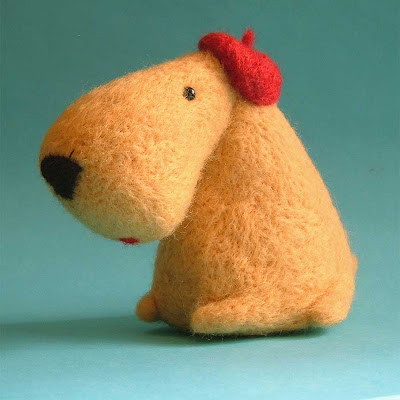 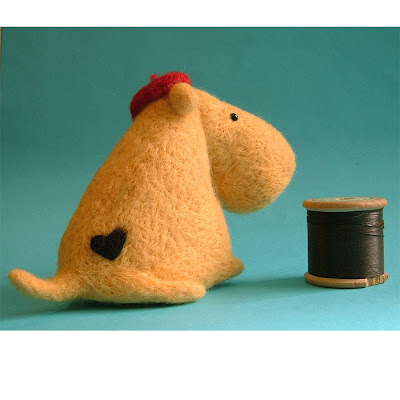 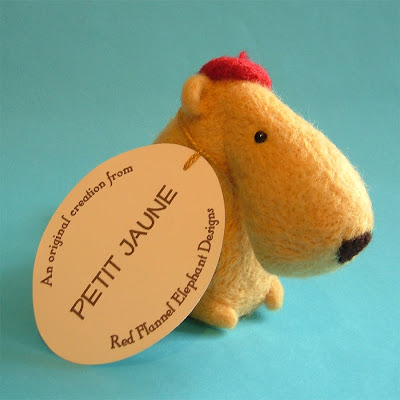 He is off to his lovely new home in Italy, having done his duty on Etsy for a few hours. I am not a natural dog-person; I find it hard to see graphic shapes in their form, (which is easy to do with naturally graceful cats) but I will persevere. Doggedly, you might say.

Sally arrived at her new home, looking a little stunned from the tender mercies of Royal Mail, but is recovered now and enjoying her new 'job'. As Eric noticed, the toys I am making now are essentially the same as the toys I've been painting for years - and I am loving creating them in Real Life. But they still start off as sketches - like this one for Petit Jaune - 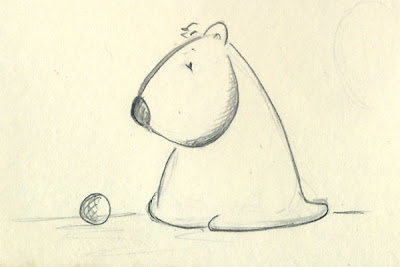 - and this one, which might be my next project...

Quite how they transmogrify into 3D from there, I really don't know. I just start one and it gradually forms under my needle. Although it is technically a textile art, needle felting is nearer to sculpting than any kind of sewing. Sculpting with rainbows and air.

As I write, and doing my usual dipping into blogs, I read with complete horror that my friend Rima has lost ALL of her art records, digitally stored, from which she makes her prints, her amazing animations and in short, from which she earns her living. Anyone who knows Rima's work and her life will know that that this is not only a devastating loss to her business, but that she simply cannot afford to get her data recovered from a specialist company. There is a general whip-round going on, so that she can pay to get her hard drive seen to and her artwork recovered - read more about it here.
Posted by Gretel at 09:10

Berets are great :D I love the shape of Petit Jaune. He reminds me of a little dog toy I had as a kid, a battered old thing that I think was originally my mum's. I think sausage dogs lend themselves very well to your needlefelting too. :)
Poor Rima! I sympathise completely, a similar thing happened to me last year.

Thank you millions Gretel for this :) I am so touched by people's kindnesses.. which is, I think, the reason for this happening :)
I have a black beret that was my grandmother's and it has stretched to Rima-proportions now, but it's an old friend :)
Lots of love xx

I had a brief phase of berets too and somewhere in the enormous pile of books is that exact same cookery book! Loving your felt creations and as I've been overly fond of dashunds since Snizel Van Krum am really looking forward to your next (?) creation.

Simply adore Petit Jaune - he's my favourite so far of your needlefelted friends, but then I'm a doggy person
at heart!

Needle felting is sooo addictive.
Not being as creative as you I am addictted to making little decorated balls...I have just got to find a use for them now!!!LOL
Take care,
Alison x

They just get better and better if that's possible! The beret is perfect on little petit Jaune and I loved looking at your pics of when you were younger. I don't have many possessions from when I was a child either and love it when I come across items I remember having. :)

What a lovely story about your beret. Memories are so nice to treasure.

Petit Jaune is adorable - wish I'd managed to snap hime up - but it's great to see your little ones travelling the world ;)

Petit jaune is thew best yet,but I love all of your felted animals. Scultping with rainbows and air, what a wonderful way to put it.

Why am I not surprised at how beautiful you are? I am now very self satisfied and said to myself "told you so".
Oh that felted puppy is fabulous...

I love the little red beret! And also your photos from the teen years.

I love your work, i have featured you in my Etsy treasury which is running at the moment, search for urioddities and cupcakes if you would like to take a look.
Hope it's OK if i link to your blog from mine.
Happy Tuesday

Oh I love the rainbows and air analogy! You know I am not going to be able to gaze at your wonderful needle felted creations without thinking 'ooh gretel used 'that' colour from the glorious palette of 120 to choose from'! I love petit juane - and am beyond excited that I have my own little soon to be 'companion' on her way to me!

Petit jaune is lovely.
Robert says it is wonderful. I showed him the pictures and he asked if it had a name!
I've just remembered how much I have a horror of berets.
I had to wear a gray one to primary school. I HATED it......
other people look super in them

Petit Jaune is so very cute!!! I so wish I would have had the chance to him. Although I must say He does look like he might fit in Italy better. He has such style. Love Him!!!

Your photos of yourself are so darling. I think you look great in that beret. I think everyone likes to have their own style. Your mother sounds like she was very understanding. No wonder you have good memories.

Take good care of yourself.
Have a good day.
Hugs,

I have never worn a beret, except the one I wore to Brownies!
Thank you so much for putting the needle felting videos on your blog, I never knew how it was done and now admire you even more for your patience and artistic eye in making them, amazing, I think mine would look awful.
Good job we are all different hey!

I read about Petit Jaune yesterday and then followed the links and realised I didn't leave a comment. I wanted to because I loved hearing about your beret & seeing pictures of you wearing it. It reminded me of my beloved red boots.

Petit jaune is a sweet little dog, especially with his jaunty beret.

I love your work! I've been lurking on your blog for a while and I thought it was about time I said hello. :)

Petit Jaune is just perfect.
I have the same cook book...you are right there are some wonderful recipes in there.

Loved looking at the old photo's of you, I used to wear berets too.
P.x

Love Petit Jaune! Wonderful character. I really feel your 3 dimensional pieces capture something even richer than your drawings( I hope that's OK I feel that way, love your drawings too )

Your animal creations are wonderful. :-)

Oh what a beauty work!!!
I don´t have words

PG,
I LOVE this little guy !!!!!He is absolutely adorable!!! I'd love to try this felting stuff! Maybe a tutorial from you would help? ...I can hope!
Blessings,