Where the barley meets the river

I realised I haven't been out for ages...I'm not mad keen on summer. Oh, it's ok in a rather obvious way, but it lacks soul - it doesn't twist my heart in the way spring or autumn do. It has it's moments though and you don't have to take a cardi out. After a bit of a pootle, I turned back towards the woods, where someone had been busy... 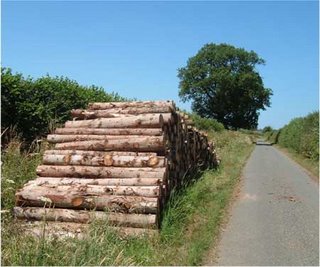 The road was strewn with bits of bark, so being all thrifty and forward thinking, I collected a basketful to store for kindling. I was trying to remember the common law on gathering, in case some officious keeper came along to stop my peasant gleanings, and I think I was within my rights, being on a public highway. 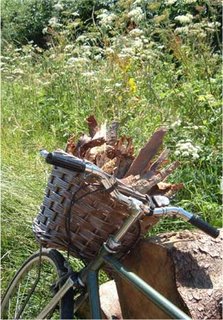 My real purpose had been to find a quiet spot to contemplate not-much-at-all, so leaving Hercules the bike to guard my hoard, I cut through the woods, dark and leafy but quite dry now. The little stream was all cracked, although only a few months ago it was chuckling away and overgrown with ferns. Further on, the fields beckoned. 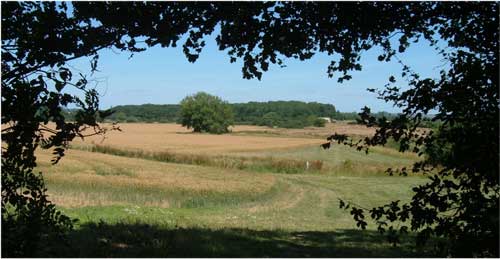 Swallows dipped low over the toasting barley and a muscular breeze whisked off the worst of the sun. To my delight there were lots of butterflies about. I am always heartened by butterflies - there are so few nowadays. I imagine a time when they will be as mythological as fairies.

"Mother, tell me about butterflies"
"Oh...butterflies" and the mother smiled, remembering that once, she too believed in butterflies, and her mother had told her the same legend, and her mother before her.
"Well, butterflies were wonderful things...it is said that when they were born, they transformed from funny, ugly worms into the most beautiful winged creatures, who flew about under the sun. They had gorgeous wings, coloured with marvelous patterns, and although they only lived for a few days, it was a life full of happiness and joy. There were so many kinds of butterflies; some were tiny, others quite large."
"As large as me mother?" interrupted the awestruck child. The mother laughed.
"Not quite as large as you darling. But maybe as large as your hand." The child spread her hand, with wondering eyes, imagining one fluttering on her outstretched palm.
"What did they eat, mother?"
"Well, most of them sipped nectar from flowers." The child frowned.
"What are flowers, mother?"
"Ahh...now that will have to wait for another day". 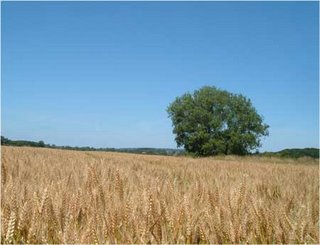 Almost hidden from view, the river Evenlode sleepily slops its way towards Oxford. I found the patch I was looking for - a bend in the river, with the barley fields behind me. Quite alone, and feeling a rare contentment, I watched a city of skinny red beetles commute from stalk to stalk. Crickets were chumming away and turquoise mayflies skipped courtship dances across the sparkling water. Beneath my feet, the whispering willow tree dipped down to tell secrets to the river. 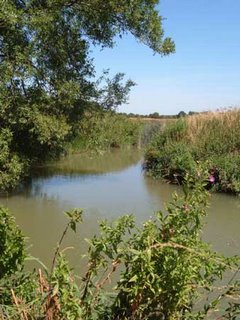 Email ThisBlogThis!Share to TwitterShare to FacebookShare to Pinterest
Labels: Cotswold summer, down by the river, Evenlode, riverside

You said summer lacks soul but then your description and pictures gave it soul enough for me to want to be back in southern summer farmland/countryside (I'm from Bedfordshire originally). There's a compliment in there somewhere.

I like the bit about butterflies, very clever, thought provoking and hopefully never coming to pass.

Well you've done it again! I'm all calm and chilled now. And with a deadline to meet too!!

Ah little sad butterfly tale. I harvested the lavender today and counted 14 different types of butterfly! I do agree with you about autumn and spring.

I like the photograph with the leaf surround and shadow on the ground as a sillouette border. P.

Funny, I was just thinking about butterflies today. I was lying on my back on the deck and staring at the blue, blue sky when a yellow and black butterfly fluttered over and was gone. Had I closed my eyes for a second I would have missed it. Then I began to wonder how many are really left and how soon they'd all be gone. Along with the frogs....along with us....
hmm...
"Mother, tell me about humans"
"Oh humans..." and the mother cockroach smiled, remembering that once, she too believed in humans, and her mother had told her the same legend..."

what a sad (but lyrical) imagining about butterflies!

And you've put your finger on just how :I feel about spring and autumn too.

The butterfly tale is so sad because it could easily become true.

Your photos and prose are an inspiration, even though you claim not to be too keen on summer. Love the name 'Evenlode'; it sounds like a name from Tolkien.

Your pictures of the English countryside are always so beautiful Gretel. You capture it just right :-)
I do adore summer but yes, I too prefer spring and love autumn. Spring is new, fresh and autumn is softer somehow with those beautiful golden colours.

Did you check out Wee Wonderfuls? I have always thought her WW bunny to be like your Numpty.

What a lovely spot by the river and what bounty in your wicker basket. Your words are so beautiful.

Summer in the English countyside is a lot sweeter than humid Montreal - your description of it was very evocative and made me yearn for those kinds of days :)

What everyone else said about the butterflies and summer.

I like the idea of 'peasant gleanings'. I'm always faintly worried about picking up bits and pieces from the great outdoors, even though I'm really careful about not damaging plants etc.