And so we made it to Oxford, and returned in one piece - indeed, we even managed to enjoy ourselves. The tourist season has not started yet, and it was possible to walk along the street without being pushed off into oncoming traffic. The city outdid herself, like a neglectful friend making amends for bad behaviour. She looks her best around this time of year I think, when the sky is almost painfully blue, and the sun bounces off the creamy white stonework of the University. 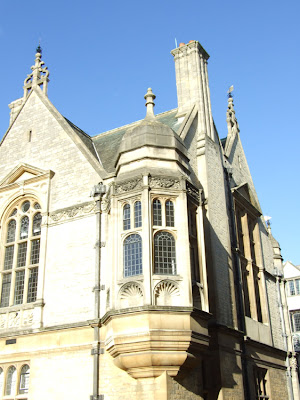 Ruskin College from the side

You could take several thousand photos of it, and still have only scratched the surface. This is a little present for Elizabeth in Marrakesh, as I believe she once attended the Ruskin School of Drawing. 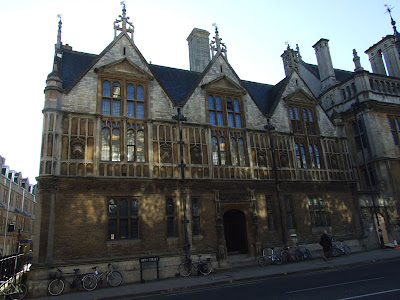 Ruskin College seen from the High
Oxford was very - Oxford. 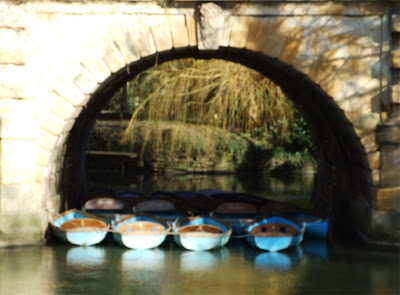 All it needed was a body and a rather grumpy white-haired Detective charging up the High, in a vintage Jaguar. 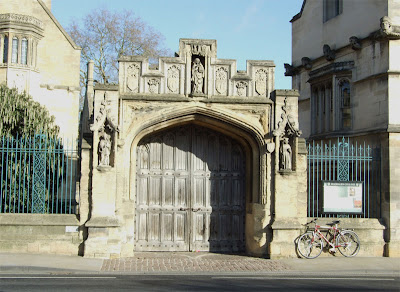 Andy must be mellowing, as for the first time that I can remember, he not only noticed that noticed that there are an awful lot of gargoyles around (bearing in mind we have lived in this area since 1994)... 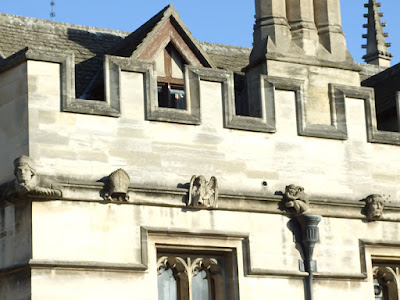 Gargoyles on Magdalen College
...but for the first time ever I persuaded him that visiting the Botanical Gardens would be a fun thing to do. And so it was.
We had a splendid time marvelling at gi-normous ferns, gawping at bulbously sinister carniverous plants, ogling outsized cacti and getting brushed up by impertinent creepers. 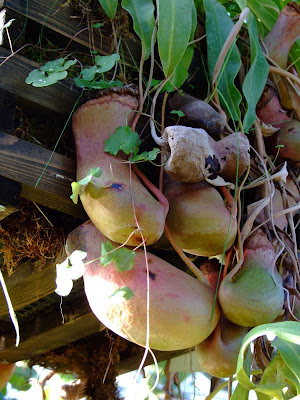 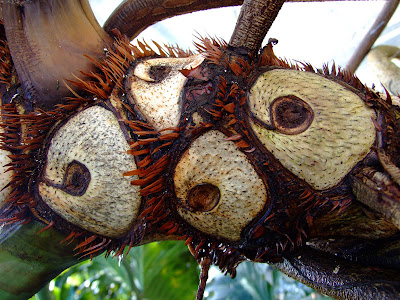 I have always had a fondness for the banana tree, and hoped it was still here, as I last saw it back in 1990 when I was a foundation art student. It had moved, I think, but it - or a descendant - was still thriving. 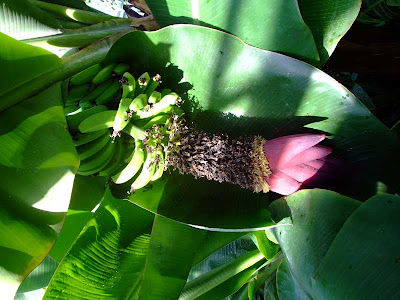 I took more photos than I care to inflict on the unwary reader, so HERE is the entire set of our explorings in the glasshouses. For those of you who like plants and the like. 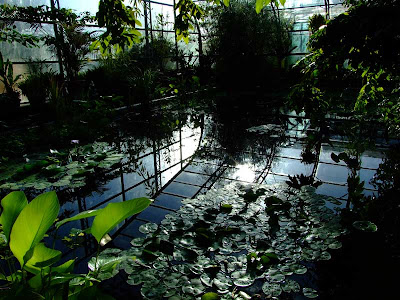 I even indulged in a little filmy-thing; it has noise but there is not much to hear above the hush of the moist greenery...

So well done Oxford, we are learning to love you again, and although we didn't make it to the Ashmolean, there will be another time. Soon.

For my dear friend Tara - I though of you when I was there, and how much you would have loved it - for you, on your birthday - (as my little posted gift is as ever, sent late)... 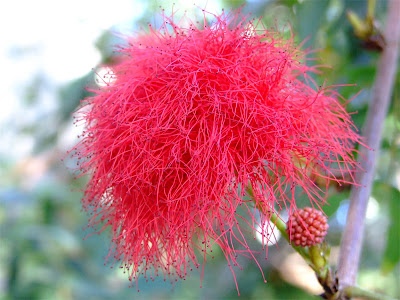 Thanks for the lovely pictures. I'm glad you had a good time and returned home safely.

I'm so glad you had a good time. Was there classical music playing in the background like on Morse, as you walked through the streets of Oxford ! They could have the music piped out as a tourist attraction !

Gretel - you are so sweet to think of me. Actually your package arrived, in a most timely fashion, *this afternoon*. It is delightful (and I feel terribly guilty having *your* copy of that DVD - but can't wait to watch! :-) and I will see if I can manage to post a proper thankyou and blog entry. We'll see... The last few sketches on this next round that I'm working on are taking WAY too long... argh.

The gardens look amazing - I would love to see them. And Oxford. Thanks for the virtual tour.

I *will* visit. Someday!

*sigh* back to the drawing board. literally.

We were not able to visit Oxford on our one trip to the UK but I can see we should on the next one!
I wish you'd spoken on your wee video, I would love to hear your voice!
I needed to drop by and extend some lovie vibes here, it's been a while!
XO
Lisa

Fabulous photos! Thanks for sharing them.

Raging with jealousy. I love your architecture and have a true fondness for gargoyles. And you got Andy to the gardens. So far I have missed both Oxford and the gardens on my trips to England. Although hubby saw Oxford without me. Probably spent 5 minutes and called it good if I know him. All the more reason to go back.

Ok - actually made a blog entry. Even gave you an award (which you may pass on or ignore at your will).

Glad you had a good time. I love botanical gardens, I will have to go next time we go to Oxford, we never have much time though when we are there as we stay with K's friends. Hope your getting those paintings finished.

Lovely photos! I'm hoping (no, intending!) to visit Oxford this summer. Your photos make me want to see that place even more.

P.S: I found your delightful blog via Tara (TLC Illustration).

What an amazing bright pink!
P.

I love all that carved stone work on the buildings. Bob.

Amazing gardens! Love the architecture, too.

so pleased you had a good time, nice to have a trip down memory lane, my first child was born in Oxford (JR hsp)

Lovely pics of Oxford, was there and studied English the summer when I was 14 (didn't teach me no spelling though) And I remember LOVING the botanical garden. Fun!

Your photographs from the Oxford Botanical Gardens were simply amazing. What a collection of unusual plants and some common ones too!

I agree that these red flowers look like they came straight out of the pages of Dr. Seuss!

What an amazing tour!
I was so touched I almost cried. It all seems so far away now.
A most magical and beautiful city.
Perhaps I'll get to visit it again soon. I was last there on a day trip with my daughter about 5 years ago.
Do you know Addison's Walk - in Magdalen? That hasn't changed in forever.
For a happy/sad account of life in Oxford in the 60's my book "The Three Graces" Elizabeth Wix, Soho Press NY 1989 is still floating around on Amazon. I think it probably costs 23p by now..........
Thank you again for the wonderful visit.

Dear Gretel,
what a feast these pictures! I haven't been to Oxford yet (I may apply one day *grin*), but you bring it really close to home. Thank you!
My favorite picture of them all is the stone bridge with the little boats tied up underneath. Their reflections on the water, and the colours of the stone seems like a perfect match. How wonderful it must have been standing there, capturing the image with your eyes and camera lens.

Thank you for the photos -- I've never before seen Oxford and very much enjoyed the trip... makes me feel smart just for peering in. At least for a minute.

I LOVE the photo in the greenhouse with the water reflecting the roof. Fab.

Hello!
Looks like a gorgeous day out in Oxford :o)

Oh, what beautiful pictures. Thank you for sharing. I wish that I could visit there...won't happen, I am sure.
An aside..he was and is my favorite detective, not the t.v. one, but the book one, and I would like to have let the author know that I was left bereft and in mourning when Morse left this earth! Damn. I loved him.

What utterly fabulous pictures, including all the glorious plant photos, just right for a plant addict like me. I know Oxford quite well but you are so right that this is the time to go before it fills up with visitors so that you can hardly see. glad you enjoyed your day.

There is a timeless quality to Oxford that is remarkable ... it never changes. The color of the stone is so unique ... thank you for the photos which bring back so many good memories for me.

That last lovely fuchsia fluff reminds me of a Muppet head, or the flower of a bottlebrush tree gone round the bend. Fantastic.