The lovely early Spring weather has fled, to be replaced with cold, pasty February skies. I am juggling several pictures at once - including a 'proper job', which - while interesting in itself - does not particularly spark fireworks. Needing to knuckle down and get on with a good day's painting, I was merely going to post this old thing - 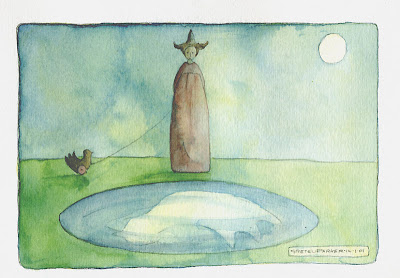 - which I've had kicking around since 2001. Then Andy brought two mysterious parcels up to the studio...which is always nice on a glum day. (And a third cup of tea, without which said studio would grind to a halt). I had completely forgotten that I had won a surprise pack from Gifling - not only a blog friend but (naturally) a highly popular Etsy artist too. 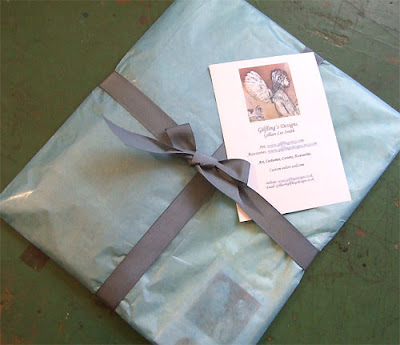 And what an wonderful pack it was; I love her work, redolent with themes of fairy tales, theatre and circus, all executed with a gorgeous muted palette and swathed in melancholic mystery. Just to have one delightful print would have been enough - but, oh generous Gifling! 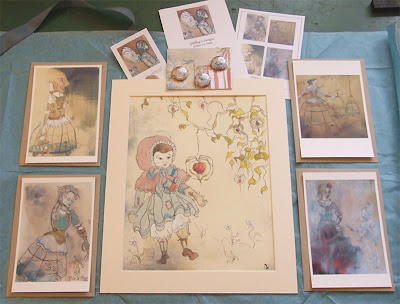 A print, a postcard pack, AND a set of scrummy circus family badges - 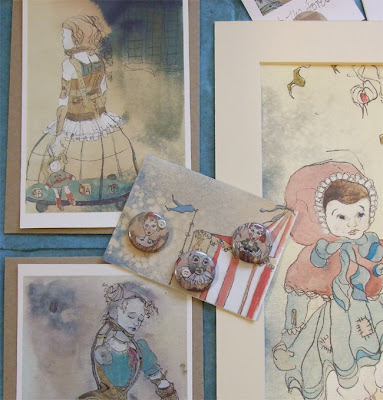 Well, what can one say, but thank you, thank you, thank you! And thank you. (Did I say thank you?) So feeling rather spoilt, I moved hungrily on to the other anonymous packet...large, soft and squidgy. And literally gasped out loud. After the nice comments (bless you all) about my wheely bird, and suggestions of needlefelting it into a real toy, I investigated further, and discovered a whole new craft waiting for me. I am really excited about the thought of creating some of my creatures in 3D, and this looks like an ideal way to do it. However pennies are very tight again, and I put the thought aside for a while. So the arrival of this - 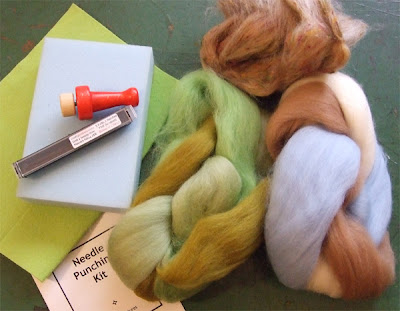 - was like a classic fairytale scenario, where the poor woodcutter's daughter finds some kind, anonymous benefactor has left the tools to her destiny on her doorstep. Not only that, but chosen well, as they are 'my' colours - so someone who knows my work too. And no note...no receipt...I have a hunch though. Just a whisper of a hunch. (edit...my hunch was wrong so I really am completely clueless...) To the great-hearted person who sent me this - thank you x 100. This is one craft about which I have absolutely no knowledge; I really thirsted to try it out and now, happily, I can. Big smiles and great restraint needed not to pick it up at once and start playing.
Did you notice the happy accident? Don't you just love it when things serendipidously fall into threes? Look at these colours...

Talking of multiples, I have been a little overwhelmed this month with various tags/list invites - too many to do really, and not much about me that is at all interesting which I haven't already posted. But thank you to lovely bloggers Paula, Tara, Little Robot, Erica and Corinne, who mentioned me on their blogs. All of whom are in my list of 'creative lovelies' on the left over there. Like having a basketful of kittens, it is hard to choose a favourite...so I will simply scoop everyone up and squeeze them. Gently of course.
Posted by Gretel at 11:26

What lovely serendipity!! I love your painting and the gifts you received look to be so perfect for you (and are lovely!). Happy Valentines' Day!

How exciting for you.

(I've been terribly jealous seeing your walks... *Finally* had a sunny day today and I made it outside for a very short time).

What fabulous pacels, I'm looking forward to seeing what you do with the felt.

Good luck with the felting - can't wait to see what you come up with!

Aww thanks for the feature! Your felting goodies look terribly exciting - I have been doing some felting myself lately and cannot wait to see your ideas interpreted in this way!

Wow, you've had some lovely gifts !

I love your Bird Moon painting. It is like serendipity - the arrival of parcels of delicious things.

Now I know what your Twitter comment meant about 'needlefelting for England' (which made me laugh when I saw it). Is it hard to learn - needlefelting, that is?

I am clapping for you! Lovely gift, and I can't wait to see what you do with it!

oooh I am sooo jealous, I love Gilflings work!

Can't wait to see the results of your needle felting - I bought a kit a while back - but still haven't got around to trying it out ;)

Now you have got me needlefelting too. I have made my first...dog?bird/thingy!