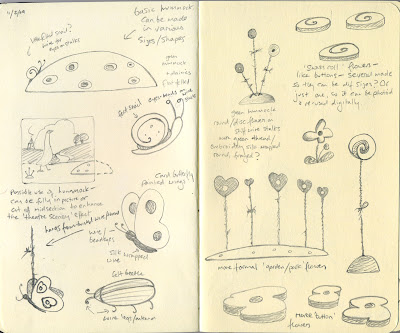 First Puddletown ideas 11 Feb 2009
(All pictures can be viewed at much larger size by right clicking your mouse)
Goodness Heavens! I was completely overwhelmed at the amazing response to my little book announcement - and so touched to read such kindness, from 'old' blog friends I feel I've known forever, to all of you who commented for the first time and new followers. Thank you does not seem enough, but thank you all so very much anyway! 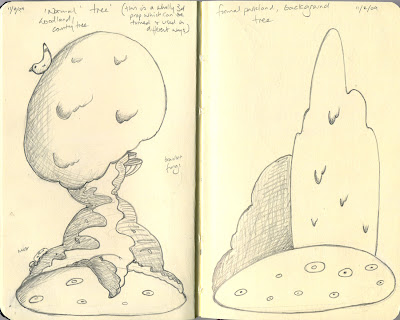 It has been a hard secret to keep; I had my first meeting at Templar in February 2009, where it was loosely proposed that together we should create this little world (it didn't even have a name then). And as it was a new approach to all of us, creating models which would fit in a pop up scenario, there was no definite book offer. I simply went away and did some brainstorming in a little Moleskine. 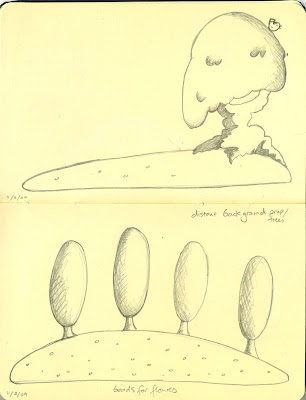 All I was required to do initially was draw whatever I felt would be in the world, so I set to work First I did little craft ideas for possible scenery and props, (at that point we knew there would be needle felted toys, but not how much of the rest of the book would be physically 'made'). Here I drew several toadstool and fungi models, of which one was eventually chosen to be made for the first book. 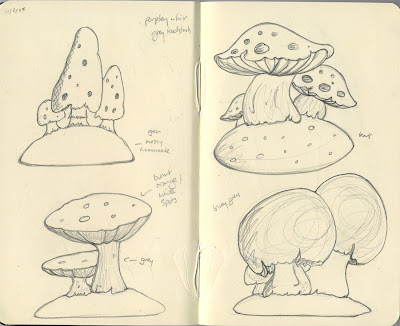 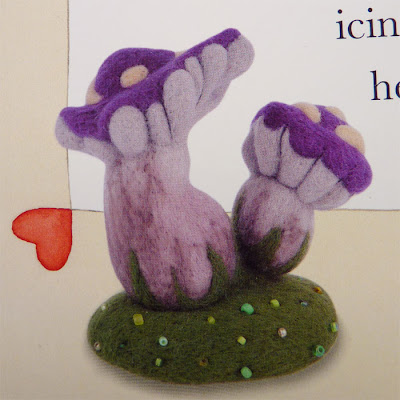 A good many trees and landscape bits were drawn. One tree made it to final production. 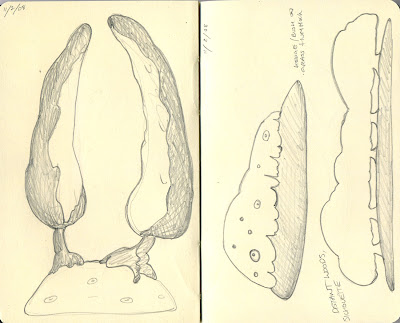 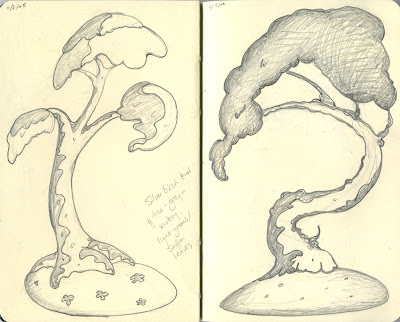 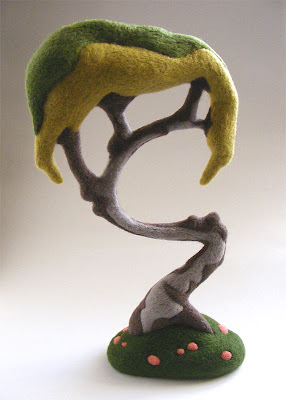 To begin with, I only made a few small 'props' - we didn't even have the main characters then, though we were certain geese would be a main feature. These props and a few toys I lent to the Templar sales team, were packaged nicely as a proposal to show at various book fairs. If feedback was good, I would hopefully get commissioned. If not... 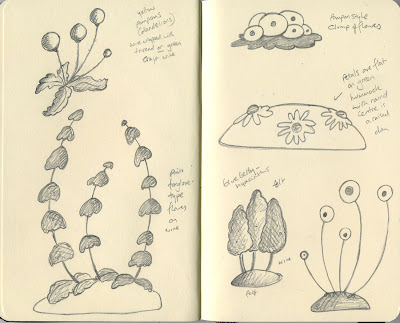 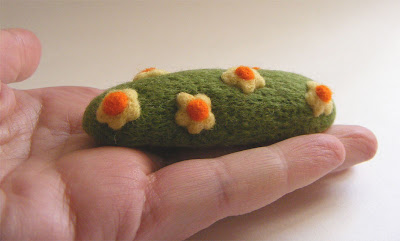 I also had to design some 'backdrops' and scenery settings. I have to confess, this was the easiest and most enjoyable part for me, l could draw little, lonely landscapes - well for a long time! I only ended up painting one of these. 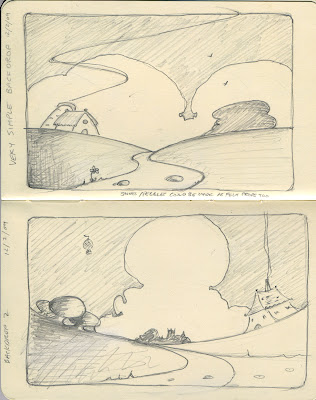 Still not decided on story lines, we juggled various ideas - here we have Custard eating trifle at a party he was afraid to go to. Eventually elements of this ended up in the second book 'Peggy's Lost Pennies'. 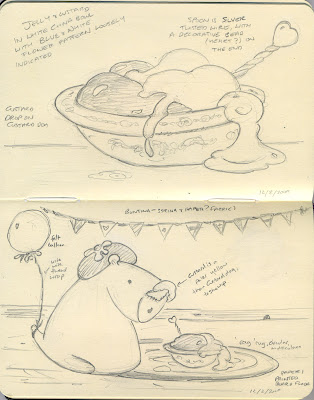 More unused landscapes - who knows if they will also make a later appearance? 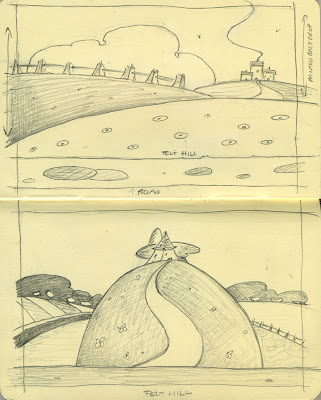 This is the first sketch for what would become a much larger and slightly changed artwork that does feature in 'Mrs Mouse's Cupcakes', the background of the first spread. 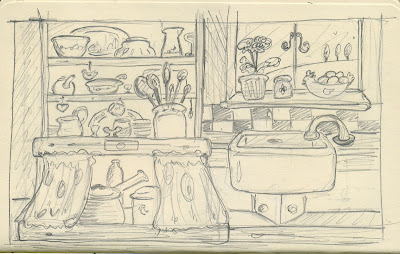 First Puddletown ideas 16 Feb 2009
I never did get to make this sun - I've always liked the idea of suns, moons and stars hanging tenuously from a thread. In fact, nearly everything I drew in this batch of sketches ended up 'on the cutting floor' and you just have to be thick skinned about it. People often refer to producing a children's book a being 'a dream', but the reality is that it is a business, it is a job, and ruthless editing is often necessary to create something saleable for the market place. 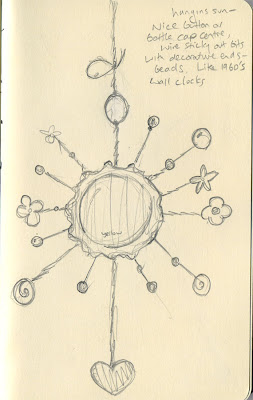 Of course, these were just the start of a much larger body of work needed, once we had two stories figured out. 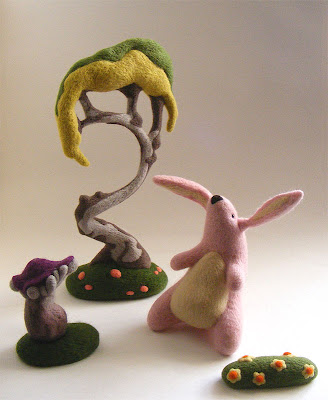 Gretel. I love this post so much. I'm going to share it on fb. I adore the felt tree, it is so beautiful and wonderfully conceived. It is such a privilege to see your working sketchbook. It has certainly made me think about how I use mine!!

Can't wait to catch up soon and thanks for sharing this - it's the perfect start to Friday evening listening to The Archers, enjoying a glass of wine and reading this wonderful post. Happy days to you Gretel. Xxxxxlove Amanda

Holy Moly!!
I leave town for one week and just look at what I miss!! A Book?!?!? What a perfectly wonderful thing! I am so unbelievably tickled to hear this news!! Well, well done you!!!!

Fabulous, gorgeous, amazing - I need a Thesaurus for some more words to say how wonderful it all is!! Again, many, many congratulations!!

Great to see the thoughts and sketches behind your brilliant book. They would make superb material for a school 'author visit', though I know you're a little reticent.

I love to see the creative process, not just the finished work; this was wonderful!

How exciting for you! I love all of your little creations. Your sketches are just beautiful. Oh, to have talent like that!! Carla

It really is fascinating to see the plotting, planning and creating! That little pink rabbit is a treasure and you really have created your own little world with the scenery. I love it. If only I was clever like you, then my little Robin's Rainbow story might have got further than a computer printed copy with a few felt pen illustrations!!

Thanks for sharing some of your process. All of the pieces for the books are wonderful but...I'm in love with that tree. What a fantastic design!

This is so delightful. How great to see your sketches and the felted pieces. I just found your blog, but your work is so inspiring!

I think there should be a book about the books...a peak at how it is all put together...very fascintating.

I can't tell you how happy all this makes me...you and Andy are so deserving of all that will coming your way.

I knew you had a hard childhood from previous posts.

Even your name Gretel, seems to go with Puddletown.

What a creative accomplishment. You must feel soo good. Mum and Dad would be proud.

You done good girl and deserve it.

Hey Gretel, what a lovely insight into the making of the book. Reminds me of Jill Barklem's skietchings for her Brambly Hedge series.
Love the idea of drawing in the moleskin, how wonderful to pick up that sketch book years down the track and remember that HUGE secret you had to keep....
The tree looks like something windblown and gnarled down near the beach or maybe up in the snowy mountains, it's just brilliant. Your needle felting is just stunning. And those mushrooms look absolutely wicked, would love to see some that colour growing in my paddocks .....

How interesting to see the process of creating your wonderful book. I lurrrvvve that tree, it is just fabulous.

I literally soak up your posts on work processes! (I remember you wrote a post ages ago about your illustration processes.) It is so fascinating to see all this, I hope to see more... :)

I'm in love with that graceful little tree!

So interesting to see the process behind the book.
That tree is just a work of art!

I love those purple toadstools:) I love the background drawings too, they remind me of the 1930s Clarice Cliffe pottery which has always appealed to me as an ideal little world.

I physically gasped as I read this. Such a personal account of your "journey"...... I hope that your sun with its "sticky out" bits comes to fruition one day...... beautiful!

So much work went into your project, it is so interesting to see how you developed your ideas. People think that children's books happen overnight, they don't see all the blood, sweat and tears.

I want to join this queue of folks who love your work so very much, and congratulate you on the publication.

I also again want to thank you for taking us all on so many walks through your beautiful area and sharing views of that cottage, and the garden. Your posts have always given me a sense of an artist affected by her environment, and an artist whose environment truly harmonizes with her art.

I think of the sounds that you hear, the quiet time to contemplate creative ideas, to let ideas percolate (or would brew be better as I bet you drink more tea than coffee!) Taking up the art of needlecrafting certainly added another layer to your visual vocabulary.

Gretel, I could go on an on, but think you will get my drift. xo

That's fantastic, I'm so pleased for you about the book and the tree is amazing ;o)

What a wonderful tree...well it all is pretty superb. and all in a great moleskine. brilliant.

this is so interesting! I love seeing the way you came to a book. When I hear people talk (or write) about it, it seems every path to a book is different. Love the droopy tree!

Thanks so much for sharing all these wonderful details of how your project began and progressed! I have to say that I think you must be a genius! Your wonderful felted creatures have fascinated me for a long time but the way you pulled all this together to create the book and the backdrops and the wonderful felted trees and well, everything, just leaves me in awe of you! You are truly brilliant!!!!

I have just discovered your blog through 'The Hermitage' and am soo delighted with your world! I enjoy seeing your process and sketches and heartily like moleskin sketchbooks too for their comfy feel and size. It is inspiring to see other artists make their way to their dreams too...

They are amazing!Love them all:)

Your sketches in a proper little moleskine notebook is pushing me to do the same. I find the design process in my quiltmaking occurs on a hastily cleared corner of my worktable using whatever comes to hand - most often the back of an old envelope. I must be more disciplined.
Thank you so much for sharing the creative and design function with us - it sparks my imagination further. I too saw the connection to the stlyised art of the 30's, especially that of Clarice Cliff.
Thanks again and all my best wishes for more successes.

Hi Gretel!
These drawings are wonderful! you are a very talented lady!
I watched this the otherday and thought of you...i thought you might enjoy it as much as i did
http://www.bbc.co.uk/iplayer/episode/b00yvs8l/The_Beauty_of_Books_Illustrated_Wonderlands/
Hope you are well?
Big hugs
Gem
xx

Puddletown is adorable -the creatures landscape all! Wish you any many sales with this book. And hopefully a complete puddletown empire even.

I'm a touch behind -- but how wonderful to have a peek into how you do your thing! The felted things are just amazing - Just love the tree!!!! Amazing work.

Remarkable! So lovely to see a whole world evolving. It is wonderful how your drawings translate into 3D - so original!