If last year was officially the Year of Stress and Striving, then I think this year is going to be the Year of Blessings. Three times I have been woken by the postman bringing a parcel from across the sea. I will have to buy new pajamas.
Three is such a magical, mystical number. Just the right amount for kind, generous fairies.

The bead fairy sent me this treasure trove of tiny baubles, nestling in organza, with three (there's that three again!) tiny paper boats, for magical journeys. I saw three ships come sailing in...
In moments of self indulgence, I take them out and gloat over them, like a dragon hoarding jewels. 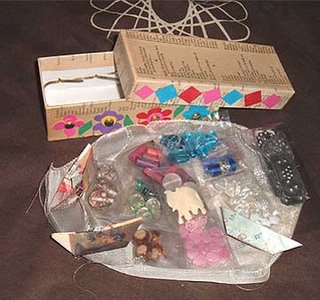 The book fairy has to remain anonymous, but she sent a selection of lovely titles, including one I hadn't heard of - although I have his other great book, 'Frog and Toad are Friends'. Arnold Lobels 'Owl at Home' is a small masterpiece. I could ramble on about why this is a classic study in genius illustration, but - I won't. Oh well, just the one point then... Lobel created such a believable world, that it is easy to overlook a major twist...nowhere in the book does Owl fly. Indoors he is seen wearing pajamas/dressing gown, as owls sleep in the day. But even when he goes outside, he walks everywhere, and at no point do you even think about it, unless you're an pedantic illustration nerd like myself. It is these little tweaks that make truly great childrens books. Every children's illustration student should be encouraged to study this book.

The third fairy sent rainbows. I am a very amateur knitter...I have just finished a shambolic scarf, and if you can't knit a straight scarf...but I can knit socks, even though they are knitted on four needles and should be quite tricky. Well, a girl's got to have a hobby and I have been inspired by Stuntmother's amazing ability to churn out lovely knits in seconds flat. I was not, however, impressed with the Witney Woolshop lady, who looked bewildered when I asked for sock patterns. Amid thousands of leaflets they had one - for gentlemen's knee high Highland dress socks. "But sock knitting is the Latest Thing in America' I wailed. Pursed lips from the shopkeeper. 'Yes - well - we're not IN America, are we?' To which there is no sensible answer. So I will find my pattern online. I shall knit cosy socks for cold studio feet. And every time I put them on, there will be an extra glow when I remember how I came by them. Thank you so much again to the knitting fairy. 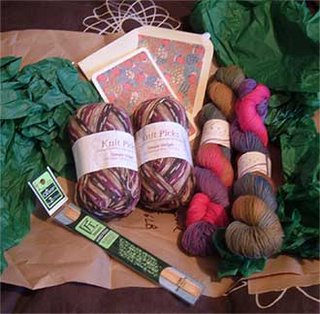 All of which makes me think that it's my turn to brighten someone's day with an unexpected gift or two...
Posted by Gretel at 20:17

How lovely for you and well deserved I'm sure :-) Nothing like an unexpected gift. Try this link for a free sock pattern http://knitting.about.com/library/blbasicsocks.htm

and happy knitting Gretel. Let me know how you get on x

What fun! I think there ought to be more secret fairies about! I suspect everyone would be tickled to get fun things in their mail...

The Society of Secret Fairies! I can see it catching on.

Thanks so much for the pattern link Dons - I am now remembering it's been a good ten years since I knitted socks...gulp!

I love that idea. The SSF... with glitter and organza business cards.

:)
I am definetely in....The SSF...Has a nice ring to it...
I read recently about a "fairy" that went door to door in some town (I can't remember where) and left fresh flowers on the door steps...it brought a lot of "magic" and smiles ofcourse to the people who received them... :)

I have always wanted to live in Owl's house.