Like many Cancerians I loathe any change in routine...but I had a seasonal urge to 'Autumn clean' and there was a desperate need to make space in our tiny Hovel (originally a little 'one up one down' for a farm labourer and presumably his wife and numerous children). We negotiate little pathways round furniture, books, magazines...all much needed of course! As I said, I am a fairly typical Cancerian. But a big clear out has been on the cards for years, and we had acquired some old bookcases (an unheard of luxury). It all started well; taking things apart is the easy bit... 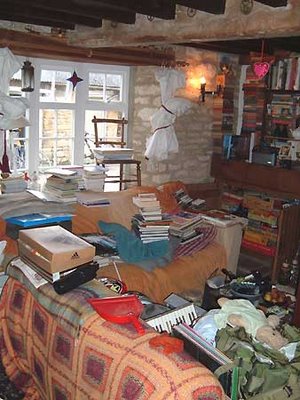 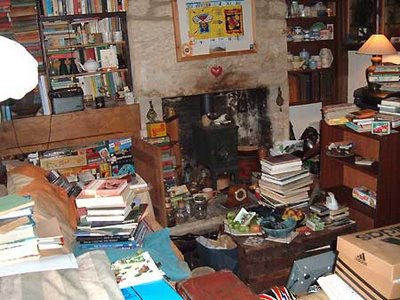 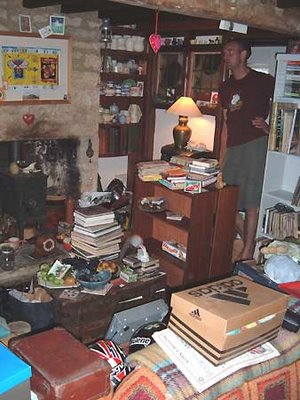 But what to do with the stuff we didn't want? Enter Freecycle. Give stuff away, or take other people's unwanted treasures. Win-win situation. Within hours of putting a couple of offers up, I had a taker for my battered old accordion and several boxes of jumble. A whole car load to be sold in aid of the RNLI. It was actually incredibly liberating to let go of so much stuff I simply have lost interest in. Times and tastes change, even for Cancerians. We still haven't found a home for the partially knackered midi system, in tasteful black ash laminate, which we've been carting about since student days. If you live in the Oxfordshire area and want one, with big speakers, e-mail me...at least half of it works, including the record player. 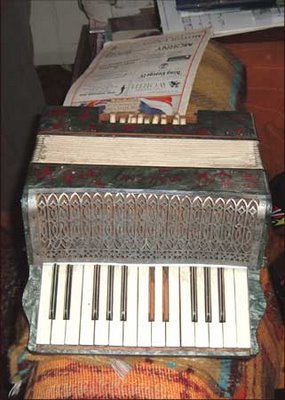 The best give-away was the accordion. I remember buying this from a charity shop when I was 17 or so. I never did learn it, or get round to mending it. Bit of a specialist job, I suspect. After 21 years, it's time for it to move on. A lovely woman from the local amateur dramatic society popped round, thrilled to have another prop for their upcoming production of 'Frankenstein'. During our chat, I found myself tentatively volunteering my services as a scenery painter at a later date and promising to buy a ticket for the play. Whoever said the Internet would kill real social interaction, severely underestimated human nature.
Time also to pack away beloved frocks which will never quite fit in the same way again. Or at all. Some things I happily put in the recycling or jumble pile. I am not a sweatshirt kind of girl any more. Several old or valuable friends have been carefully wrapped in newspaper (a classic remedy for repelling moths) and cedar scented cards tucked inbetween. The pretty rose scattered Liberty frocks, my threadbare purple tie-dyed hippy top, the 1960's yellow daisy mini-dress, the gorgeous vintage emerald lace number I picked up for pennies and never wore - the same tale of good intentions to mend it and never getting round to it. 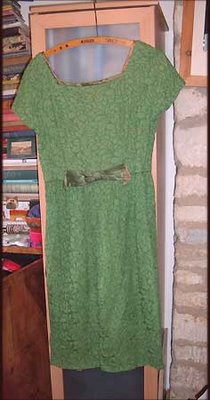 Gradually we are getting straight again.

Isn't it liberating? I LOVE Free Cycle as way of parting with things you no longer need - it's just so much kinder than throwing them away!! Fab green dress :)

I have a brown dress similar to your green one. Is there a layer of lace over the top? I bought mine years ago in a jumble sale but it was too big, now, being a larger person, it is far too small but I am loathe to part with it.
P.x

Strangely enough we are having a clear out too, it's amazing how much "junk" you can gather around you. We've also got so many books and will need to invest in another bookcase soon ...

Does newspaper really work to repel those dreaded moths?

Freecycle is simply the best idea ever! And Penny, it sounds as if we have got the same dress, silk lined with thick lace over - I think mine has a Peggy Lee label in. I should hang on to it...why not? Don't be such a sensible Taurean ;)
Gail, I think it must work, I have another trunk of old clothes I want to keep, it's been packed in newspaper for four years and is ok so far. I also scattered bits of card with cedar oil, which should keep the blighters away. Fingers crossed

Mmmm cedarwood and lavender bags definitely keep those moths away. I don't like moths in my house, they are an enemy to the fabric collector!

.....and thanks to you I have just joined my local freecycle group. Brilliant :-)

Ah, Rima, I'm sorry, I should have rung you...but it was missing two black keys, and needed a LOT of tlc..bit of a geriatric in fact...

never, ever, ever give away those clothes! 'cause oneday you will find a need for them - they are classics, to be treasured. loved the peek into your home!

oh I love to see homes as jumbly as ours!

theres another herb good against moths, I can't think what its called..... it'll come to me later and I'll pop back.

Yes, Freecycle is brilliant! we've given away an old but perfectly good sofabed and old guinea pig hutch which would have had to be dumped otherwise.

Blackberry syrup - I don't see why it shouldn't work well. But I also have this recipe for Blackberry liqueur:
4lb blackberries, 1 pint water, tbsp. cloves, tbsp. grated nutmeg - bring to boil then simmer for 15 mins. When cold strain and measure liquid. For every pint of juice add 1 lb sugar. Heat gently to dissolve sugar. Remove from heat, add 1/2 pint brandy, stir in and bottle. Yum yum yum. Let me know how it is, haven't made this one.

What a gorgeous, wonderfully characterful house! No wonder you feel so creative there.

ooh you are PG - hee, hee! thanks for visiting my blog xo

Looks like you had quite a job on your hands. But what a lovely little house you have! I love the ceiling and windows and fireplace and book shelves!
Please show more sometime and the outside too!

Lettuce - I am going to try that Liquor, sounds delicious! Tea, when we are straight (nearly!) I will post the results...

Oh! Despite all of the stuff- your place looks so homey and cozy. I love that fireplace- I bet it's the best thing ever to sit in front of it on a chilly day with a good book...or a good friend.

Doesn't it feel good to get rid of stuff? You've inspired me- as soon this work load is over, I'm on it.

I love your cottage it looks so homely and cosy. It must be so nice to have all your things around you. I have a few favourite bits and peices with me. The rest are pack away with my parents. I can't wait to have a house to get them out again. Its going to be like christmas.

Hello again, just had a look in my dress and it's 'Carnegie of London' not that this means anything to me. Mine is similar to yours but with long brown lace sleeves, which dont have material underneath like the body.
Didnt know Taureans were supposed to be sensible?!
Penny.

Oh your place is so homey and lovely. I know, I too get the urge to start throwing out during the fall--not the spring. I haven't started anything as of yet, though. giggle. That accordian is great and I'm sure it will enjoy its new home on stage!

I bet it was great fun rooting through everything and uncovering lots of old, half-forgotten treasures, I love doing that, although I'm sure none of my treasures are on a par with that fab accordion. Like you say, it's the tidying up afterwards and putting everything away that's the pain. New bookshelves though, hurray!

That's a gorgeous green dress, do you know anyone who's nifty with a sewing machine? Maybe they could mend it for you in return for some homegrown goodies or something. Just a thought...

Lovely cluttery cottage! Like a treasure trove of interesting things!

Freecycle is fab! I've got rid of lots of things, even a 9ft wooden curtain pole which the buyer took away in a little fiat!!

Goth, you are a one! Heavens, WE can't afford to buy the hovel, tiny and delapidated as it is...or have you licensed 'Mad Toms Farm' to Dreamworks and are now a squillionaire?