Sometimes a picture can be elusive. Today I wanted to create a similar picture to 'Stormy Day'. I started off with an old lady under a brolly, but changed it to an anxious but hopeful hen. I reiterated the fowl theme by putting patchwork egg shapes on the umbrella and a tiny wooden rooster on the tip. 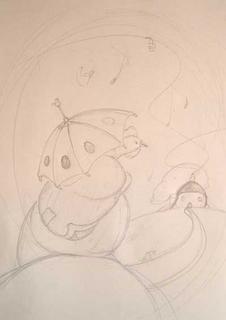 I didn't like the first layout at all, and was unhappy about the size and placing of the house. So I redrew it and added my usual spooky trees and a smaller cottage. I also drew in a little chick in her wings, peering out at the road ahead. When I had done this, I was instantly reminded of the painting by Ford Madox Brown, 'The Last of England' with the mother holding the tiny hand of her baby, hidden beneath her cloak. The parents are emigrating, leaving all that is familiar behind, to start a (hopefully) better life in a new country. Is that what my hen and her chick are doing? Seeking refuge? 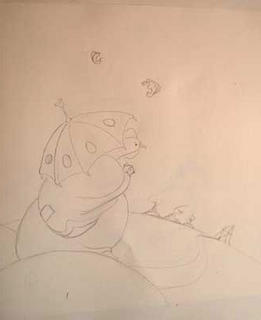 I changed the orientation from portrait to landscape. Now I was starting to see where it was going - and more importantly, what was happening to my characters. Would they get to the cottage before nightfall? 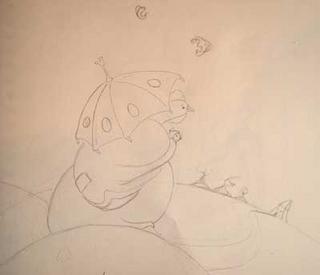 I changed the chick's head so that he was looking up - at what ? It had to be a balloon. At first I placed it just blowing away over the trees, but it was more dramatic to have it disappearing off the mount, which will be oval. There was a big gap on the left hand side, so I drew a little shell car, with a sillhouetted hen driver and a smoke line coming out of a chimney. Was he a taxi, dropping them off at their final destination, or just an anonymous motorist? Did the 'Lost Balloon' (as I now knew the title had to be) belong to the chick, who carelessly let it go - or was it someone else's? At this point the questions remain unanswered, for it is, after all, a picture not a story. 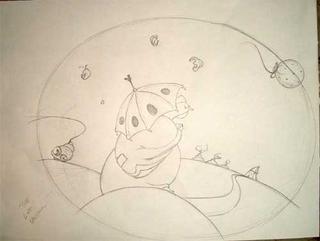 There are a few tweaks to go - the hill on the left will change direction, it looks most odd, running at the same angle as the hill on the righthand side. The balloon string will probably be moved and I may alter the shape of the foreground hill. But other than that, I'm really looking forward to painting this one.
Posted by Gretel at 16:50

Email ThisBlogThis!Share to TwitterShare to FacebookShare to Pinterest
Labels: Struggling to draw, The Last of England, The Lost Balloon

I truly enjoyed this insight into the process of creating your paintings. How you allow a sketch to grow by narrating it is fascinating. The final sketch is remarkably different in energy, interest and drama from the first -- I look forward to seeing the finished work.