It seems an unlikely alliance - a young Filipino born American singer-songwriter from Nashville and a British forty- something, reclusive, sometime-illustrator. And yet when Gordon Roque contacted me out of the blue last year, having read my blog and connected with my artwork, we instantly hit it off. The race which knows Joseph. So, knowing that he instinctively understood the darker side to my toy paintings, (which many people miss) I was more than pleased when he asked me to review his debut CD, 'Sea Horses'. 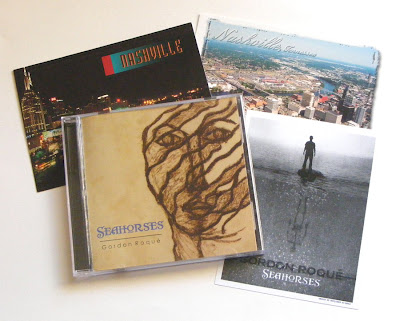 I was worried I wouldn't like it. But I needn't have; I was in safe hands. As the first song 'the Boy in the Room' trickled from my CD player, I found myself quite overcome. It crept under my defences and wound its way into the tender corners of my soul which I normally keep close and safe. And I had some insight into why Gordon found a connection with my work. Some things transcend age, background and nationality.

'Sea Horses ' is a lovely, lyrical and deeply poignant album, a peephole into a wounded, but joyful heart. Deeply moving and at times, wrenching, the songs have quietly stitched themselves to me, as I have played them again and again. They dip into mellow soulfulness, then soar up rippling and tumbling like a woodland stream, before gently growling into melancholic, bluesy shadows. 'The Devil Prayed' is a particular favourite of mine. with a rousing chorus, which showcases his versatile, elastic voice and I loved the dark, disconcerting, broken music box feel to 'Mr Stranger'. Each song has been carefully crafted by an accomplished musician, combining gorgeous keyboard playing with a sublime voice.

By the time I reached the end of the album, I would have bet my last fiver that Gordon had generously slipped in a little something , and so I let the CD play beyond the listed tracks. I was not disappointed. And that's all I'm going to say - it is a delicious little secret which you have to discover for yourself.

Gordon has self produced this professionally finished album. Like me, he is dedicating his life to his chosen path, no matter how difficult or discouraging things get. That is just another reason I respect him and his music so very much. Doing things the hard way, with complete commitment and one hundred per cent immersion into one's craft seems to be a bit of a rarity nowadays. It offers no instant reward, is often lonely and, as the saying goes, 1% inspiration and 99% perspiration. It's tough and there is no guarantee that there will be any payback for your efforts, though I have a gut feeling that in this case, the world will be hearing more from this multi-talented artist. Gordon often plays live, and an up-to-date list of dates can be found here. His blog can be found here - Where Pianos Roam, with it's sister blog, The Oreo Gallery, following the sweetly funny adventures of the miniature piano Oreo and her little friend buttercup on their travels.


If you want a flavour of this extraordinary debut album, then do watch this sampler video, or just listen to selected songs here. And if you are persuaded, then the CD is for sale from his website - it would be $13 well spent.


I wonder what he plays when he is alone in his room, if this is what he gives to the world. I think you would have to be a very quiet cat in the corner to know.
Posted by Gretel at 13:28

Thanks for that Gretel, beautiful music!
P.x

Thanks for sharing that! He's very good!

Lovely; aren't you pleased to be asked to review!

fantastic! What a talented guy. Thanks for sharing his music.

Lovely review. I shall pop over to hear him.