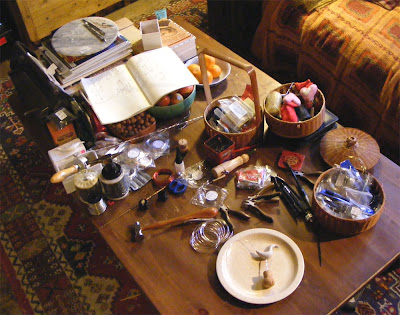 'It's all right,' the Rat would say. 'Badger'll turn up some day or other - he's always turning up - and then I'll introduce you...but you must not only take him AS you find him, but WHEN you find him.'

'Couldn't you ask him here - dinner or something?' said the Mole.

'He wouldn't come,' replied the Rat simply. 'Badger hates Society, and invitations, and dinner, and all that sort of thing.'

'Well, then, supposing we go and call on HIM?' suggested the Mole.

'O, I'm sure he wouldn't like that at ALL,' said the Rat, quite alarmed. 'He's so very shy, he'd be sure to be offended. I've never even ventured to call on him at his own home myself, though I know him so well.
('The Wind in the Willows' by Kenneth Graham)
Posted by Gretel at 12:34

I think there is a little bit of Badger in us all.

I believe I have quite a lot of Badger in me!

I see your wire arrived then ... some intregueing (I can never spell that word!) looking items there that you're working on ... can't wait to see what they turn out to be ;-)

I wouldn't mind a spot on that couch and a chance to peer over your shoulder. I'd be very quiet; I promise!

I'm a solitary person and would love to be alone with that pile of goodies you have on your table! I wish I was more sociable and envy people who love parties but I've accepted that I haven't changed now at the age of forty-something, so I'm unlikely to ever change!x

I think winter enhances my need for alone time - I'm grumpy not good company at all. As soon as spring starts coming round, a weight is lifted and I'm much nicer:)

I hear wind howling outside my windows, and so wish that I could stay indoors all day working on my many projects. Alas, soon I must head downtown to the shop and be very social.

Seems like there's more than quite a few of us being solitary all together, simultaineously, alone kind of thing...

It just took me 3 days to realize our phone was out of order. hehe oops

A lovely, whimsical way to get your point across.

I hope your cold has cleared up . . . I have been worrying about you!

I've quite a bit of the Badger in me too..though not the grumpiness. I am a consummate (sp?) Professional Recluse. I would happily not cross our bridge for weeks and weeks at a time.

I love Wind in the Willows and solitude too! My mother first read the story to me as a child. When Henry was courting me, he read it aloud to me over tea. Later he read it to our children. One of my best gifts to him was a gorgeous leather bound version with lovely watercolors. Keep warm!

I was beginning to wonder where you were. (It sounds like I was wise NOT to 'come over' and inquire!)

I am definately a Badger type personality and I think my family share Rats anxiety when they are about to approach my lair.
Everything on your table looks fascinating and will no doubt produce something spectacular.
cheers

A well occupied Badger, I would say. By the by thanks again for the corner rounding punch tip, I've got one and am rounding away; but not going round the bend, well, not yet at any rate.

Ah I know the feeling all too well. Well I hope I am not cranky, but I do know I prefer to be quiet in my space. Your little space looks so lovely, it looks like some fun little projects are being created.

Hi Gretel (if I may) thank you for sharing tidbits of your life, your work and home is really interesting. I'm from the Philippines (I'm freezing at 17 degrees) and it's a delight to read about lives of crafters and artists from the other side of the planet. I'm looking forward to reading more. Cheers!

This is the perfect time of year for Badgerness. I understand him perfectly.

I think its living in the country that makes us solitary people!

Very well put, and I think there is also a lot of Badger to be found in me too :)

Hi Gretel,
nice to know there's so many badgers out there! By nature I'm very quiet, too but I do enjoy the company of cats when I work on my art!
best,
Nan and =^..^=

although I know the badger well and my house is in a state of ..um, creative chaos most times, it is comforting to know that I'm in such good company! :)

I understand this totally. I mean, I love my close friends, and I am not averse to meeting new ones now and then. But when it comes to society and invitations and dinner I am with badger all the way!

I am at least 75% badger and I say this with shame. I love people but find it difficult to be around them. Must be my lack of self esteem. I do enjoy the W&W books and their illustrations. So enchanting.
smiles
LiBBy

Amen! I would bet badger is Cancerian. :)

I think I will post this quote on my door just in case someone thinks about knocking on the door of my messy house :-) Subzero weather today is another reason to feel badger-like!

I am intrigued by your table. "What are you going to do with all that wire?" I wonder, something wonderful no doubt.

Amongst The Oaks said...

Oh I do wish I could have a table like that before my hearth. Mine would be full of books and tools and craft projects. But alas, the Lord of the Manor says that sort of thing looks too messy. Sigh.
~Laura
And we all seem more Badgerish this time of year, don't we?

I agree, it is a very Badgerish time of year.
If it wouldn't be too un-Badgerlike, PG, I've tagged you on my blog to play book tag, mostly because you have the most wonderful literary quotes in your posts :) Strictly voluntary, of course!

I agree, I think also there is some of Badger in all of us.

Gretel, if you pop over to my blog you will find an award that I have given you. I think your blog is the most creative of any I have seen and I love it. Margaret

My solitary part of me says hello to yours. Looking forward to seeing the sketche's results.

I certainly do understand that! Lovely quote ...

I think I'm the un-Badger - except when I have settled in for the evening.
Yes, there is something wonderful about solitude.
Yesterday R. went out with friends and I was ON MY OWN for five hours! Bliss since we work and live in an apartment.
Your table is so full of exciting and interesting things - you could never, ever, be bored.

I see there's a goose for the gander in the making. Or is vice versa?

Would you like me to come over with an apple strudel and make you a cup of tea?

Isn't it interesting (and to me comforting) that so many comments are from people who relate to this need for solitude? I live with so much unwanted city noise, and crowds, and demands to be sociable, that true silence and time to just be by myself can be difficult to find. It's hard to say gently to friends that I need time on my own without receiving anxious looks, or noticing that they feel rejected. Hmm, food for thought here.....

I love it ...and for the most part, I live it! I can feel a badgerish frown on my face when someone knocks on the door when I'm working.

I lock the doors of my palace and feel safe to be me. That table looks to have many treasures...Our things to be creative can't just fit in a drawer...lol.

Hope you are doing well. Take care. Sending you hugs.

I have posted a little something for you on my blog as well if you get a chance to pop over.
Badger-willing, of course.
Jen
♥

May I encourage you to continue the benefits of your badgerdom, even as the fan club clicks and clicks at your door?

From a fellow badger and Cancerian...
I am mesmerized by your blog, just found this morning.
A wonderful mix of carnage, cooking, motivation, courage and beauty. Looove it!
You were the tonic I needed today to get off my butt and get on with it. Thanks,
Ronnie-in a small town in Georgia