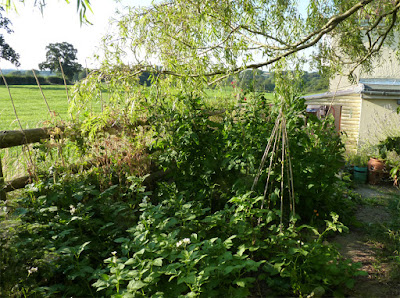 It's been a funny season in the vegetable garden. Our weather has been very erratic, and some things have struggled. I planted two small crops of potatoes and we decided to investigate them at the weekend. One batch was planted as a pioneer, right at the end where the really poor soil was. I wasn't expecting much, but it is always exciting to shove a fork in, turn the earth and see what comes up. 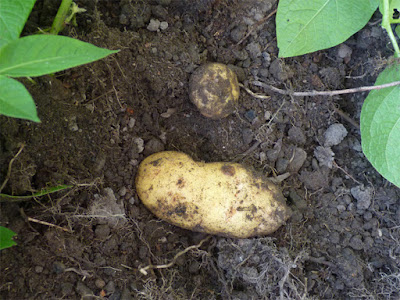 At first it seemed as if there would be little or nothing, but two plants provided enough for dinner. They were rather misshapen and scabby, but a good scrubbing brought up the  yellowy skins and they were, in fact, delicious. 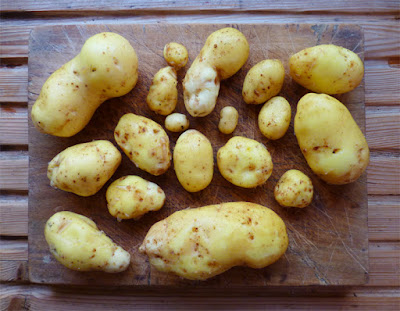 My planting in the front patch has also been hit and miss; I envisaged a carefully landscaped herb patch with pretty little alpines spotted about. However, I planted dwarf comfrey. Wild comfrey grows quite large, so when I bought some 'dwarf' comfrey roots, I anticipated that they would be of a fairly modest size. 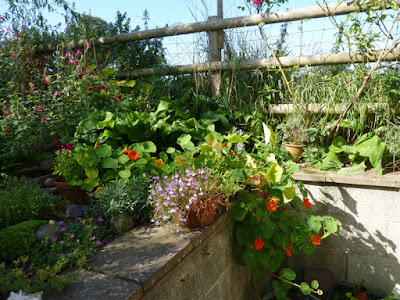 This has not turned out exactly as planned; dwarf comfrey does, in fact, grow just as large as wild comfrey. It has grown into a many headed beast. My reason for cultivating it was purely practical; comfrey leaves (I have read) make excellent liquid fertiliser. The good news is that I have plenty of them and the plants thrive on being cut back. The bad news is that they are far too much of a thug to grow here and will have to be relocated to a wild patch, where they can flourish without drowning out their smaller neighbours. (Somewhere behind this lot are two lavender bushes and a curry plant). 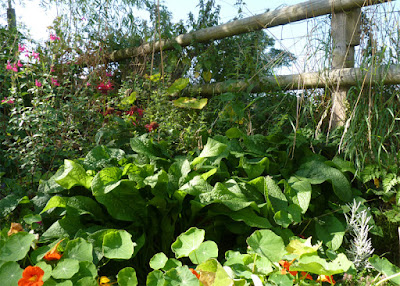 I harvested a fair amount. The leaves were torn into pieces and are now soaking in water, in a  not-very-picturesque plastic bucket. They rot down very quickly and produce an almost black, viscous liquid which frankly stinks to high Heaven. I'm going to need a bigger bucket. 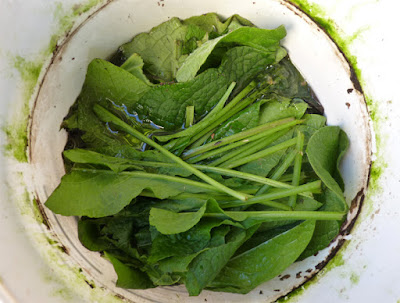 Lots of lively growth in these pictures. Love digging up potatoes, it's like a wonderful surprise, every time.

Fun fact: comfrey is also known as "knitbone" and was used as a poultice to help soothe the pain of broken bones (and to help them heal).

There’s nothing more satisfying than eating your own crop. I planted a comfrey earlier this year, I don’t mind if it takes over but that might be famous last words.🤣xx