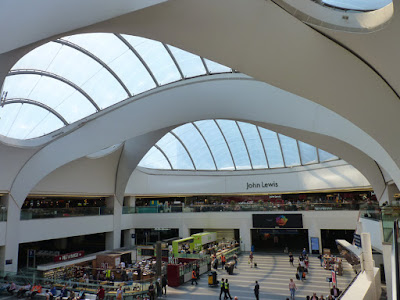 Last month I had my birthday. As some of you will know, I'm really not keen on birthdays and try to keep mine as private and small scale as possible, heaving a small sigh of relief when it is over. However, this year, Joe decided to that we should go out and here we are at Birmingham train station; I passed through this place many times on the way to and from workshops  when it was undergoing renovation, and it was a major pain to navigate. But I have to admit it looks magnificent now. 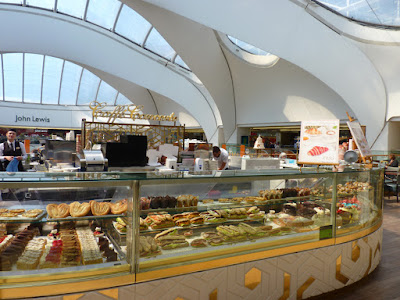 We were destined for the recently opened 'Kitty Cafe', located on the edge of the shopping area, where Joe had booked us seats in advance. (Pre-booking is pretty essential). For those of you not familiar with the concept, it's a free-range cat cafe, with rescued cats and kittens bouncing about all over the place. Food covers are provided, to prevent potential snacking and there are lots of basic ground rules which make complete sense if you're a cat person (for instance don't hassle the cats, let them come to you). 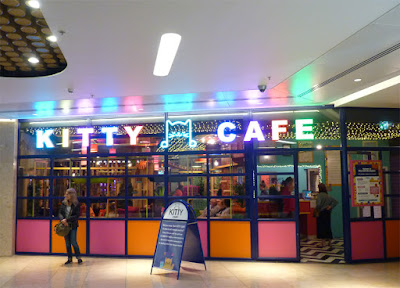 The service is friendly and professional and there were more than enough staff. On top of food and drink costs, here is a £6 per person welfare charge, which goes towards the upkeep of the cats. The food is nice enough,  but to be honest we weren't really there for the food. 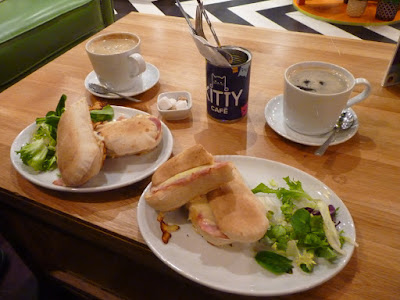 We had an hour's worth of cafe time and it whizzed by. It was hard to get decent photos, especially of the kittens, who zoomed about like little furry rockets. There is ample space for them to run about in and the entire space is catered for their every need. 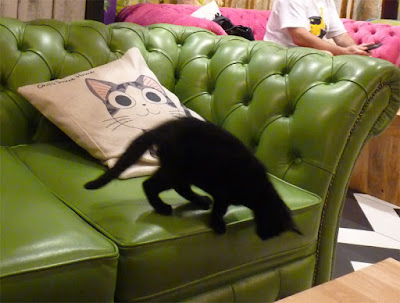 This was a very special treat for me. If you've endured this blog for long enough, you may recall that once upon a time I had four cats, who all made the big move to Shropshire in 2012 with Andy and myself. Within a year of that move, I had not only lost Andy, but two of my cats as well (illness and old age). My darling ginger cat, Pumpkin, had to be put to sleep three years ago, due to a blood clot in his spine. He kept me company in the long, lonely months after Andy died, and losing him was beyond awful. Joe and I buried him under the pear tree, with many tears. And the oldest, meanest cat of them all, Samson, ended up more or less living with Jean-next-door, who loved him to bits; he lasted to be nearly 22 years old and is buried next door.  So that was that for cats, and since then I've not felt able to deal with the responsibility of pet care. But I have missed cat company. So much so that I had to blink back a few tears when we first entered the café. 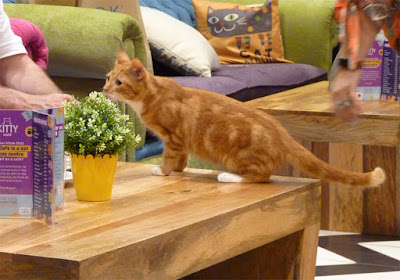 All of the cats were perfectly happy in their environment and unfazed by so many people. There are walkways near the ceiling, hideaways and access to a private area if they want time out. 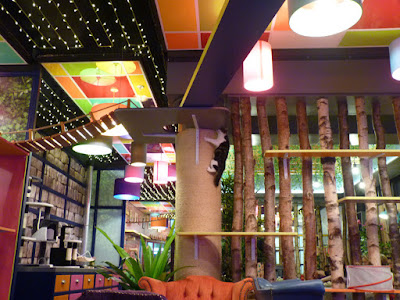 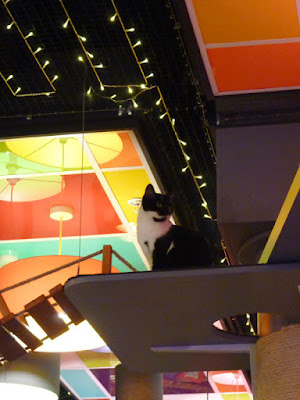 Now that life seems steadier, we have recently thought about getting another cat, and were very taken with this little chap, who was the only visitor to our table who did not try to nab something, but instead sat quietly, unfazed and watching the world. 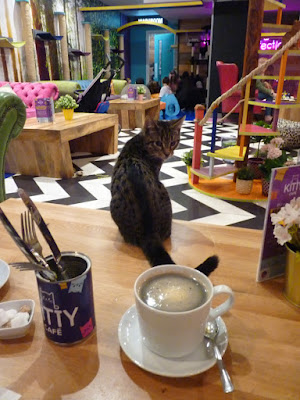 However, life threw yet another curve ball at us last week, when Joe was taken ill at work, with breathing difficulties. He spent several days in hospital, being tested and monitored and is now thankfully cleared. It's been a horrible time for both of us, but he is hugely improved and almost back to his old self. Cats are off the agenda for the time being.
Posted by Gretel at 11:22

I hope Joe is feeling better soon. That was scary!

They have a lot of those cat cafes here, but I have never been to one. I have two cats at home that ignore me just fine, thank you, very much. Hahaha!

I hope you enjoyed your special day...celebrating or not.

What an amazing café With cats! Thank you for sharing this experience with us. I hope Joe is getting all well again after his sudden illness. Best wishes from Hildegunn

Oh, no....poor Joe.... and poor you, too, worrying about him. Do you think being around all the cats got to him? I hope not..... it might be nice to have a little furry guy around again.

I am so sorry to hear about Joe! Please let him know we're thinking of him over here. I deal with asthma as a chronic condition, along with allergies, and Larry has diabetes, so I understand the trepidation you feel about facing life with an ongoing health issue. But it's doable, and hasn't slowed us down too much. I hope the same will be true for Joe.

What an amazing place! I hope Joe is feeling better, that sounds very scary.xx