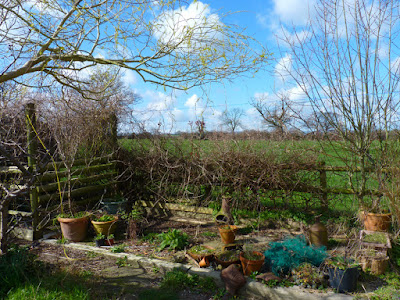 This is a kind of patio area that used to have a large dog run built on top of it. Thankfully that was gone when Andy and I moved in. It's been a bit of a mess since then as since Andy died, my own future here has been tenuous. I've spent the last few years trying to hold my head together and  there has seemed little point in putting a huge effort into something I may have to leave behind. 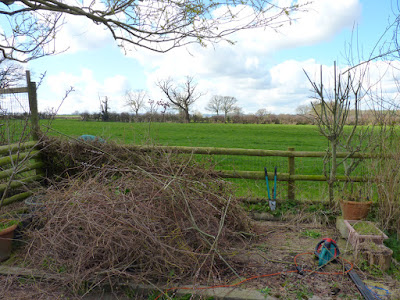 Last year, before Joe moved in, Brian-next-door helped me to cut down the worst of the nasty knot weed stuff, which was a beast. Since then, Joe has taken an axe to it several times and dug up the main roots. It seems to have been vanquished at last. 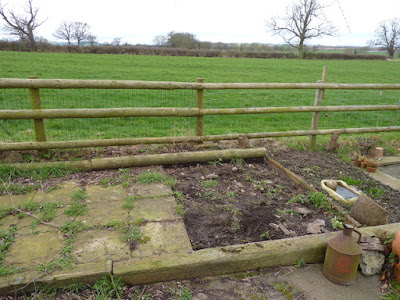 So even with the future being uncertain, we made a start on tidying it up properly earlier this year. Joe lifted the slabs. 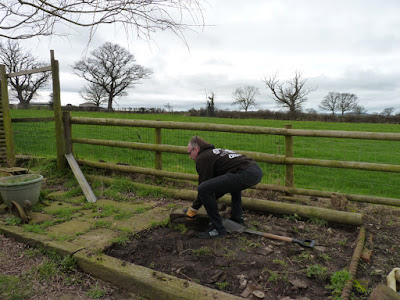 At last a nice sized plot was revealed. I began digging it over. 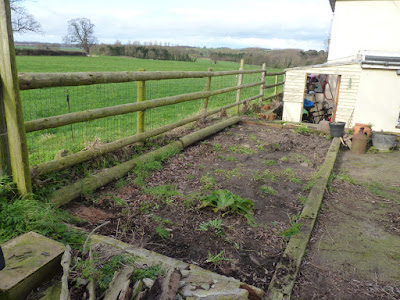 And even though there hasn't really been any money for plants or seeds, I have managed to grow a few things and it looks a lot better. 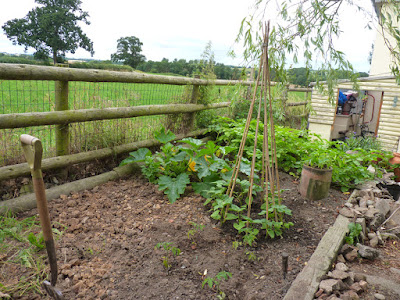 The potatoes at the back should break the earth up (not for nothing are they known as 'pioneer plants'). The courgettes and beans seem happy enough. 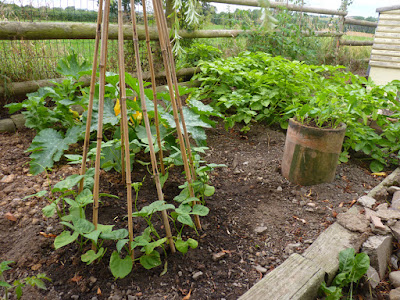 As you can seem a lot of rubble has been removed. It will take some work and a lot of manure this winter to turn the earth around. And there is still a patch at the back which I am getting to grips with. It is thick, dry clay mingled with stones and rubbish, so I am doing it bit by bit, inch by inch. 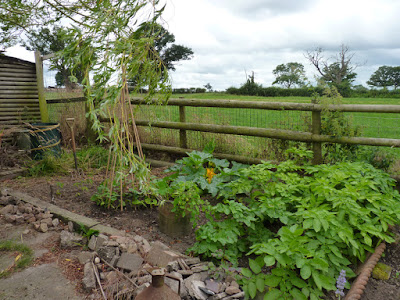 There are tomato plants growing at the side. It all looks a little bare, but at last it looks as if we'll be able to stay here for a while and maybe next year I will be able to plant out the large herb patch that I have secretly dreamed of. 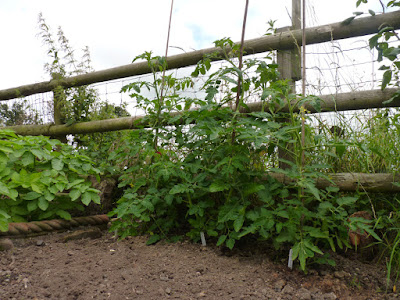 With everything that has happened, and being in a rather fragile state of mind most of the time, I still find it hard to contemplate a more reassured future. This little corner of the garden is the one part that is slowly taking form, with some herbs and creeping succulents. I look out on it often and try to take hope. 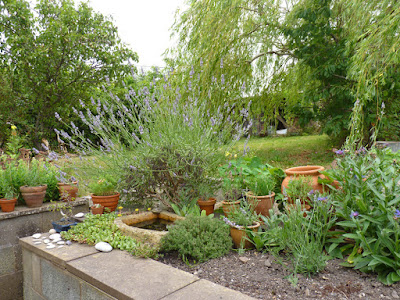 I cannot imagine how difficult it must be for you. Yet there is something of comfort in gardening, in letting your mind sink into plants and earth, and planning ahead. You know, my father planted a lilac bush and primroses the year he died. He knew his end was only a short time ahead, and yet he planted a lilac knowing it would not bloom for several years.

Your new garden space is really coming together, and next year I bet it will be lush and full of life. Sending hugs and love, Gretel, and my hope that your days will be the same.

Growing a garden is good for the soul. It's soothing. You live in such a beautiful area, I hope you get to stay a long time and put down roots.

frayed at the edge said...

Hi Gretel
Yes, live in the moment and enjoy your garden ...... who knows what tomorrow will bring for any of us, so we have to have enjoy what we have today.
Love from Anne xx

Your garden is coming along so well. Do hope you get to stay if that is what you want. Looks like a lovely spot in the country.

Hi Gretel - you definitely have green fingers - a great little patch and so rewarding to have grown your own stuff to pick and enjoy. x Jo

What a wonderful,difference you have made to what was such a sad patch of garden. Winning the fight against Japanese Knotweed is an achievement in itself!
With your attention, bit by bit this area will respond and heal and nature will reward you with a small harvest, and the comfort of working in the garden will help soothe your stresses.

It's so reassuring to be able to look out on something you've planted and is growing well. I hope it feeds your soul as well as your body. That's a great way to see your progress forward in the green and growing things. As a follower, it's wonderful to see your good news.

Isn't gardening a wonderful way to help ourselves feel a little better in this sometimes difficult world? You've done amazing work, and you deserve to be happy and proud of how much better it will look from now on! Now you'll just need to find a little corner, or a warm spot outside, to start those seeds next Spring :)

(While writing this, I can look out over my front garden. When we bought our house, it was nothing but lawn. Then we had to dig it all up to replace sewer and water lines. Now there's a hedge of raspberries along the road, and beds full of perennials and herbs. I change things a little every year, but there's always something beautiful to see)