The garden in June 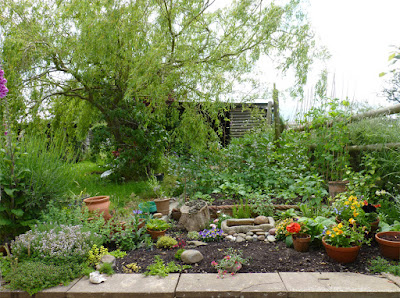 As I write, we are coming to the end of what has been a solid week of rain. Thankfully the cottage is on a hill and we have escaped the flooding that has disrupted some parts of Shropshire. So as the garden is looking rather soggy and the summery flowers temporarily defeated, I am glad I took these photos when everything was happier and drier. 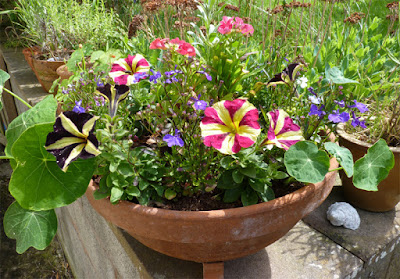 A foxglove self seeded itself in an awkward corner and while my first instinct was to remove it, I spared it, to see how it would grow. I'm very glad I did, as it naturally shaped itself around the large lavender bush and has grown to be  roughly six feet tall. 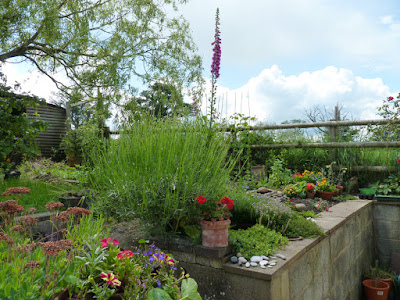 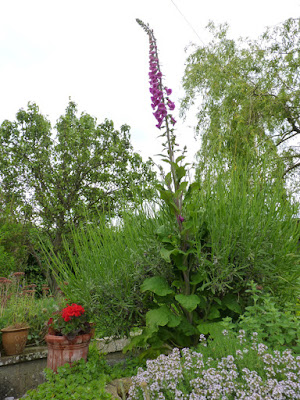 Like the lavender, it is buffeted by westerly winds which push it into a curvaceous line and so they have combined to make a graceful composition that, had I planned it, could not have looked more beautiful. 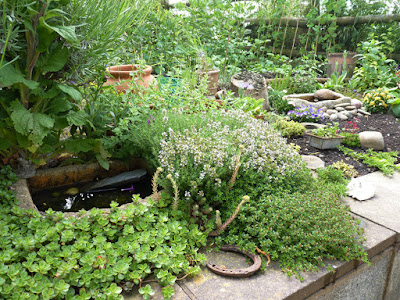 The front herb patch continues to grow - with very little money, I am slowly filling it out, leaving enough space for everything to spread. Cheap herbs, such as the common and trailing thymes will, over a couple of years, grow rather too well. I hard prune the common thyme back twice a year, when the bee friendly flowers are finished, but this year I am going to be more ruthless or it will take over.

At the front of the patch where the shallow growing plants are, there are three types of oregano, four thymes, golden marjoram, trailing rosemary, a French tarragon which struggles, and a few other things including a random tub of parsley used as a space filler. 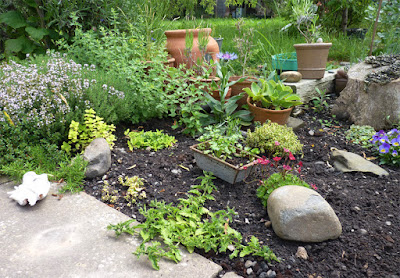 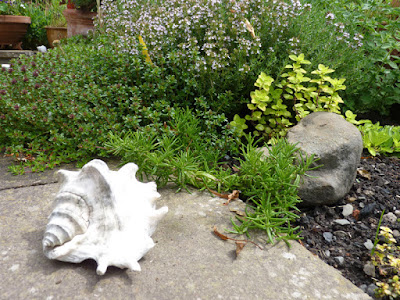 Common violas, which cost one UK pound a pot, seem to go on forever if they are deadheaded and add subtle splashes of colour. At the back of the trough, the hyssop and blackcurrant sage have tripled in size already. There is a large bare patch for more low growing alpines at some point. 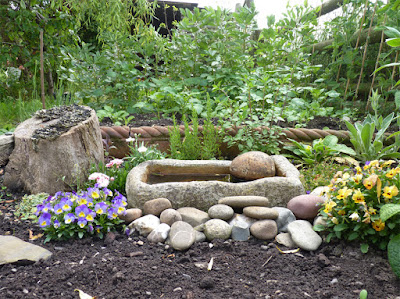 Next to the violas grows dwarf comfrey - it was grown from six stubby roots I picked up cheaply on eBay and has flourished rather too well. However, this is fine, as it was planted for the leaves which I'll be harvesting soon, as they provide an intense, nourishing fertiliser when soaked in water. And when it flowers, it is another bee attraction. 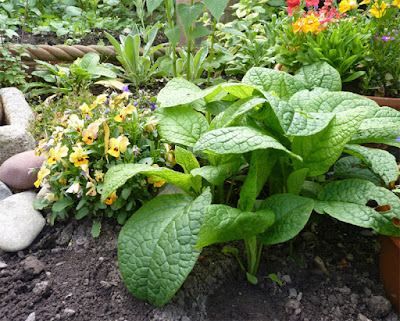 To temporarily fill up spare space, I have pots of pretty summer annuals in front of taller herbs. Since this picture was taken, the herbs have shot up and I am slightly regretting putting (what were) three tiny lemon balm plants. Now shot up and spreading, they are providing the thick cover at the back, which is what I had planned, but will need some taming soon. 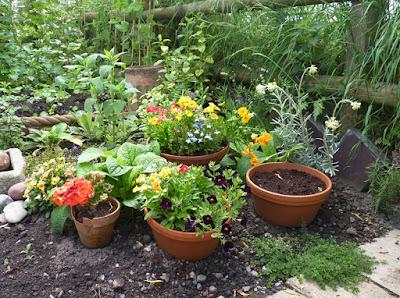 One of my favourite finds this year has been 'black' petunias - like many annuals, they hate the rain and are looking bedraggled now, but when they are warm and dry, they look like dark velvet. 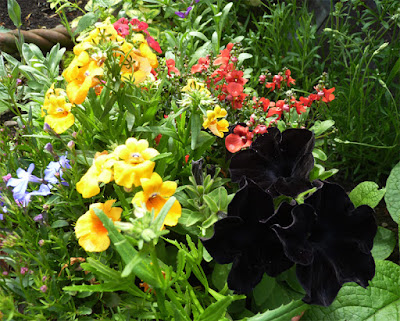 I have frequently complained - bitterly - about the amount of rubble and stones which have plagued my digging efforts in the vegetable patch. However, I have found a very good use for some of the more natural shapes; large ones can hold back a vigorous plant from over growing a smaller neighbour and when placed next to a dainty alpine, adds a rather Japanese element (I like to think). 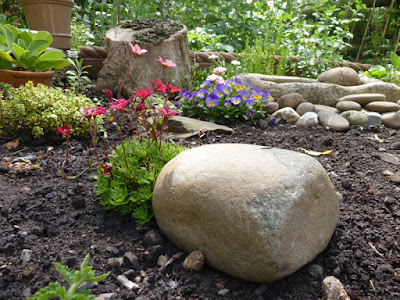 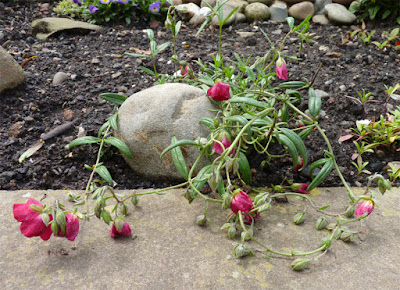 Finally, a rather blurry shot of the 'very tall foxglove' at night, from my Instagram feed. Now is coming to the end of it's glory and I will miss it when it is over. 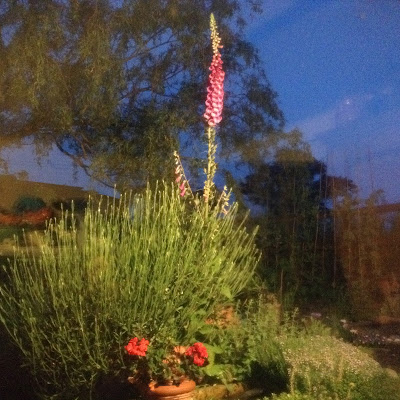 What an artistic eye you have to arrange all those elements so beautifully! I especially love the linear trough. Just beautiful. I remember the mess you originally had in there and spent time cleaning up. Well done! It's just beautiful!

Lovely! Thank you for posting!

oh its looking so beautiful...we keep saying we want to put a small-ish pond in our garden as we've seen frogs and toads from neighbouring gardens in our cottage lawn. And of course to attract more wildlife.
I really love the foxgloves, been amazing along the Devon and Cornish lanes, especially along side the hog weed and cowparsley.
I've been needle felting for over a year now, self taught really, but so admire the detail and designs of yours ;) very inspiring!

Your garden is really lovely and all those herbs will be so useful. x Jo

It is very interesting to see the great improvements you have made in your garden. Once such a small haven on Earth is created, one will always find comfort and strength by being there :-)

Your gardens's coming on so well! We've had a few self seeded foxgloves this year, I'm amazed at how deep the colour is and how much taller they are than the usual shop bought ones. I love plants that find their own way! xx

oh, it looks wonderful.... my creeping Pink Chintz Thyme has totally overgrown some of the flat rocks I put in place for walking on in the garden... I have to pull it out frequently to be able to find the walking stones.... and the bees love the tiny flowers...so it is tough to pull any of it out really....I let it go crazy and then... try later to be fierce with it....
Some very tall and beautiful iris have bloomed this week ... almost invisible as the Korean Lilac near them has gotten too large... hmmm... what to do about that? .....

aren't plants great to play in? A person can get lost in thyme out there for sure....