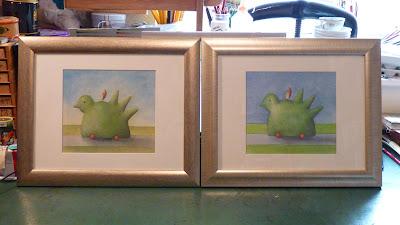 So last month, I had this picture - the one on the right hand side - to deliver. Not a million miles away, to an area we thought we knew inside-out. But somehow, this secret place had evaded us. It was an oasis of quiet, a little settlement near one of the Oxford rivers, where you wouldn't go unless you had business there. For a start, there is a large elderly lady goose, keeping a watchful eye on everything and everyone. She was formidable - look at that chest! 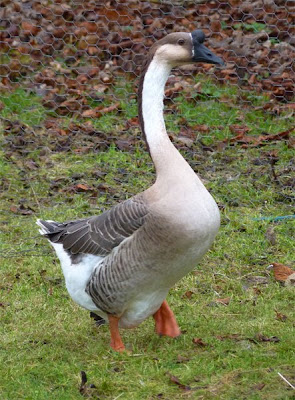 Almost as soon as we were in our host's front door, I was intrigued by a pair of photographs which looked rather familiar - anyone else recognise this rather famous statue? 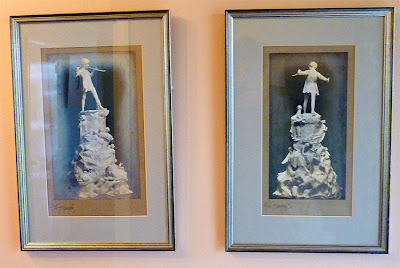 That's right - it's the Peter Pan statue which stands in Kensington Gardens. Although it's not quite. These are a pair of silver nitrate photographs of the original plaster casts of that very statue. They were rescued from a skip by my client's father and then rescued again by her, from being binned again in a clearout. They are signed by the sculptor, Sir George Frampton - or just George Frampton as he has called himself here. Because of the usual problems of photographing glass I am afraid the image qualities are not great and I inadvertently appear in this one. I haven't been able to find any mention surviving pre-casts online, who knows if these are not the only records? 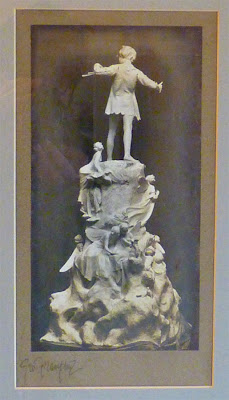 After coffee, we were given a grand tour, the main feature of which was this magnificent old disused corn mill. A mill was recorded here almost a thousand years ago in the Domesday Book and was still grinding in the 20th century. It is divided into three parts and we were privileged to be allowed to view the corner section to the left. 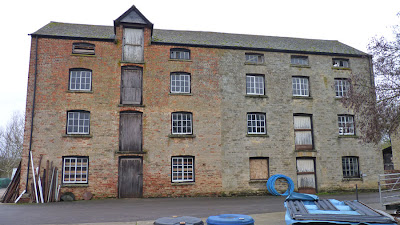 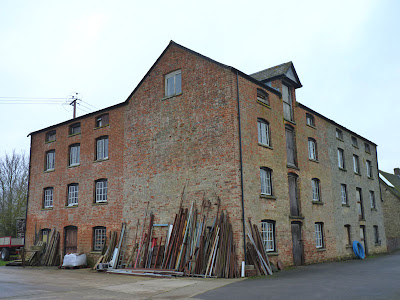 It is not entirely disused - it does hold the most amazing amount of - stuff - imaginable. The ground floor is crammed. Oh hoarders, rejoice! 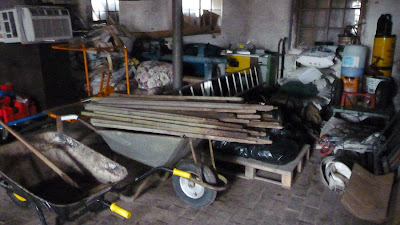 Inside, it has barely changed structurally since it's working days. This includes the steps joining the floors, which sent the fear through me - heights and the vision of me falling down them, breaking my arm again. Andy went up first. 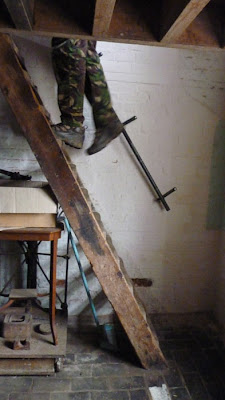 The first floor, smelling faintly of - 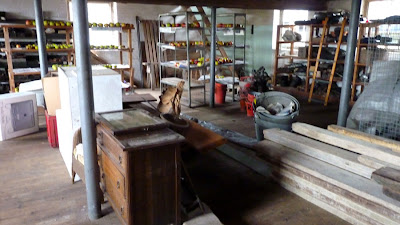 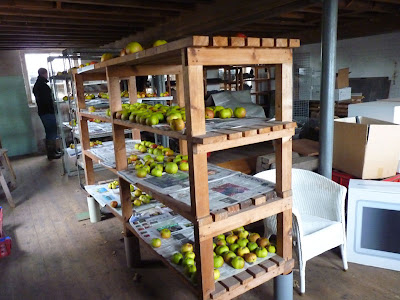 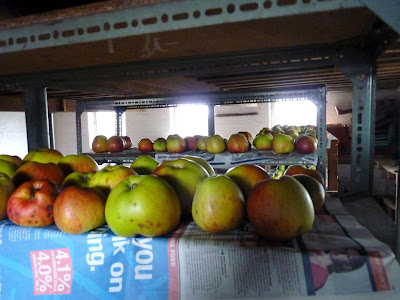 When I first saw the mill from the outside, my first thought was what an amazing studio complex it would make. As I gingerly climbed each level I was proved right - the light is incredible, pouring in through two sides and once you get past the jumble, the space is immense. 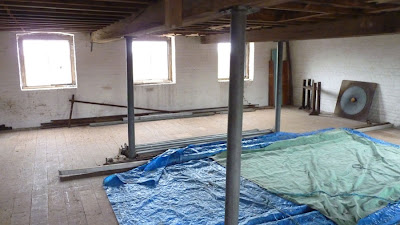 A scythe rather casually propped up against a wall - old, but not unused; the blade looked fresh and new. 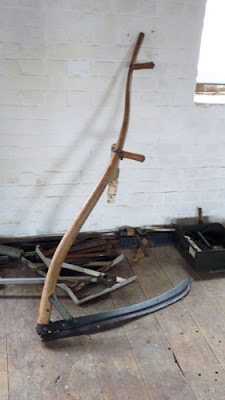 If you don't mind heights (I do) the views are stunning. This is as far as I could bring myself to get to that great big gap just waiting to be fallen through, showing the river to the right and the towpath where we would continue our walk. 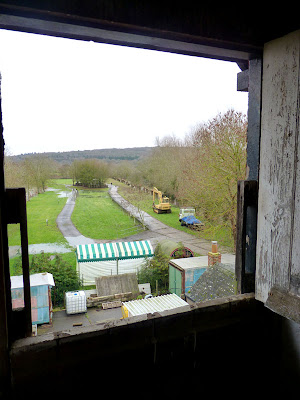 The upper levels were more dusty, simply storing various beams and architectural gumph. Not so much light, but I could see a library in my mind's eye, cosy and labyrinthine with bookshelves and armchairs at strategic places. 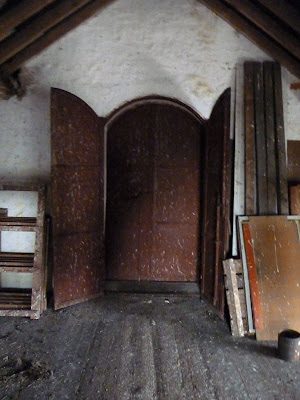 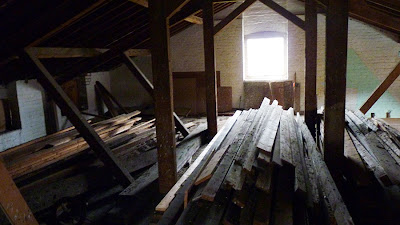 Descending the steep steps backwards was even more heart-stopping than going up them. Andy stood nobly at the bottom of each flight, to catch me (or rather, cushion my fall) if the worst happened. 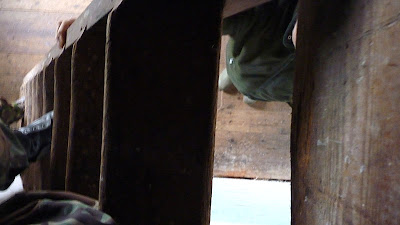 Outside, still mentally planning my studio mill-conversion (should I somehow acquire a couple of million pounds) there were more charms. A dear little vardo in need of love - me please! Who would not treasure this sweet wagon? 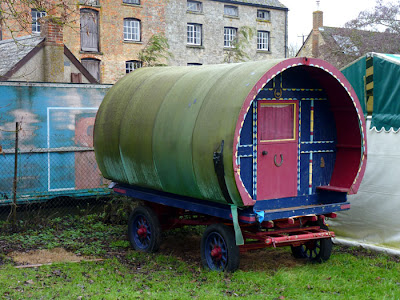 As usual, I got left behind, taking dozens of photographs. 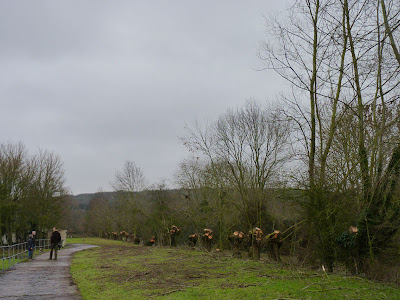 There were chickens fussing about - 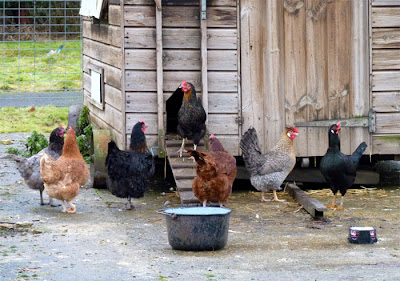 - and a pair of mischievous looking runner ducks. 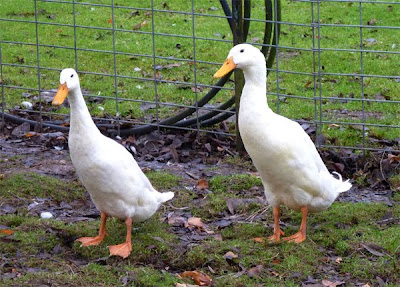 We finished up almost back where we'd started, on the side of the sluice gates, which can just be seen to the right of the mill, where the red brick bridge is. 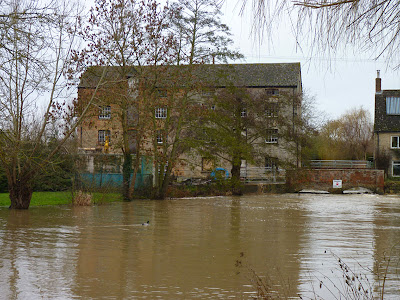 Such immense water power pounding through, and the sound fills your ears like thunder. 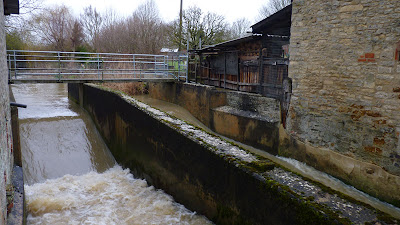 After a lovely lunch, we left with a homemade quiche, a leg of Scottish red deer (as you do) and the invitation to come back again - which I will, because there are a hundred and one things I want to draw - especially Madame Goose. Oh, and did I mention the goats? 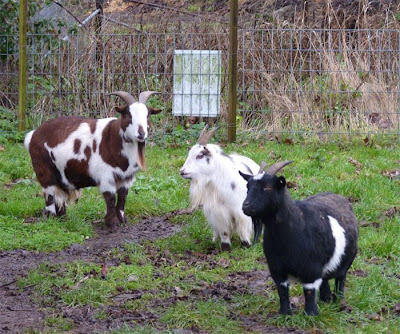 Update - A final comment from our hosts that day -
"I believe the goose is Chinese and the goats are African Pigmy Goats. The big black one (Fred) is quite evil but Lulu Alfie and Daisy are really sweet. The Mill is not being restored or converted - YET"
Posted by Gretel at 15:04

Oh Gretel, you must assuredly return to this place! The second I saw the photo of Mme Goose, I sensed some possibilities in her profile and attitude.

Proud to say I also guessed the Peter Pan statue, but it's very intriguing to learn the actual subject of that photo.

What an amazing place you have found, full of nooks, crannies, animals, views, machinery to tempt one's imagination.

Gosh those Magazines look cool, I must check them out, cheers from New Zealand Marie

What a splendid day trip! Apart from all that fear of falling down... Splendid photos too, thank you.

Fascinating tour of the old mill. It is under some restoration and I wonder if its glory will next be studio apartments. Thank you for the mysterious tour, even apples for a snack. They looked delicious. Were they? Goosey Gander looks to be an African Brown. One of his relatives may have resided on the family farm years ago. lol They hold a nasty pinch.
BlessYourHeart

What a fantastic place. I enjoyed all the details and particularly like the arched double doors on the upper level.
The goats are beautiful. I haven't seen goats with that stocky anatomy before.Are they a special breed? Gruff maybe?

What a wonderful place, do you know what sort of a mill it was? It looks more like a place that had cotton or silk looms rather than a flour mill? I love that scythe, so good that it is still in use.

This entire post is a wonder. Love the Peter Pan photos (which is probably not a huge revelation, come to think of it), love the photos of the mill, sharing your trepidation when it comes to extremely steep stairs/ladders and the, erm, perfectly valid concerns about falling off, OH GOSH THAT VARDO!!, etc.

Am I gushing? I am gushing. I'll stop now.

You did well to conguer those fears and it was so worth it. An amazing place and good to know that such places are being maintained and used. I wish for you that couple of million!

What a wonderful day out. Like you, I would have had trouble with the ladders and the heights! Lots of potential for future drawings for you .... geese, chickens and the gorgeous goats!

Thanks for the virtual tour - delightful. I can almost smell the apples.

I too knew the Peter Pan statue, I remember being taken to visit it when we visit my beloved godmother who was a nanny in London.

Lovely mill, if you ever get that couple of million I'd love a studio.
jane

What a wonderful post and an exciting place :D I often make grand plans in my mind too, of places I'd love to renovate. Glad you made it back safely.x

What a great discovery and what a grand day out.

You should have known as soon as you were greeted by the goose that this would be a magical visit! I would love to live in that mill, even with the scary stairs - what a fabulous place. When you get your millions, turn it into an artist's commune....
How was the venison?

wow.... those were definitely steep steps.. and what a wonderful old place. You are right...millions of pounds to restore and keep up..... can't imagine it... although,.... as you say also... wonderful light and amazing views...

pretty interesting to see the little pre-cast thingies... and love the "vardo" .... you're absolutely right... a must go back kind of place for sure

What a wonderful day. I can't wait to see your version of the goose. I'd like to move right into that little wagon. Oh, happy day.

What a wonderful day! You're right, the Mill would work really well as a studio complex...
The wagon is adorable :)

What a wonderful place and a super post Gretel. I love places like this. they inspire us to greater thoughts I think. Lovely!

O O O what a magical adventure and all because of your lovely picture.

Hello there!
On a completely unrelated note I found this post on the Tate's blog http://blog.tate.org.uk/?p=3832 (erm, this should, hopefully, link to an article about Mark Hearld at home) and somehow it made me think of you.
kind regards
Helen

Hi Helen, I hope you read this - I can't find an email or blog for you - just to say, thank you very much for the lovely link, I can see why you made the connection - we both seem to have similar tastes in overfilled rooms of *stuff* and toys, I would love to go and explore his studio! Difference is, he is vey successful...

The stuff that dreams are made of ! I dream about living in a place with such a deep rich history. Can't wait to see how this inspires your work.
SmiLes
LiBBy

What a lovely place! Done up properly it could be a dream home! Also fab for inspiration for stories.

Hello Gretel and thanks for your visit and comment.

Don't know of a NYC Peter Pan statue; it was the Kensington Gardens one I remembered.

I forgot to mention that climbing vertical steps/ladders freak me out, too!

Our weather is strangely mild right now, but I hear that some sort of snow will happen by Monday, just to keep us on our shoveling toes.

Ack! Those goats are the *best*!