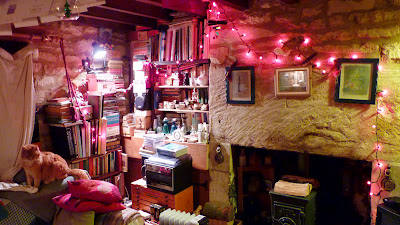 Thank you to everyone for the kind Andy-come-home wishes! He did return that night, to much rejoicing but had to work right up until the weekend. He had a miserly two days off at Christmas, then returned to the fray, because retail workers get little respite at this time of year. So we're glad it's all over and he won't be so tired. We are both thankful to see the back of 2010 which was quite tough in parts. Never festive at the best of times, I wasn't going to put decorations up, but weakened last thing on Christmas Eve and strung a line of cherry fairy lights up, hung with a few non-glass things. On Christmas Day we allowed ourselves to enjoy the snow and had a marvellous walk round the fields. This is the front of our cottage, a basic one-up-one-down matchbox, glittering with icicles. 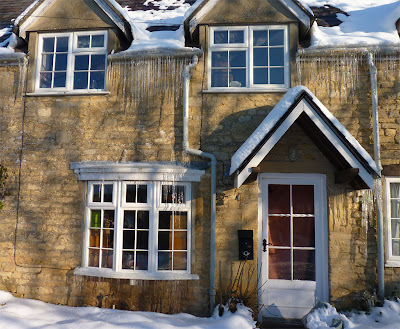 Poor Andy was so tired that he forgot to buy his Christmas beer - but luckily his brother had made an inspired choice of present with a gift box of real ale. I admit to being a teeny bit jealous.

But my beer envy was short lived, because the same Andy's brother had managed to find me a whole box of vintage toymaking books and magazines! Some real gems in here and I've had a happy time browsing them. 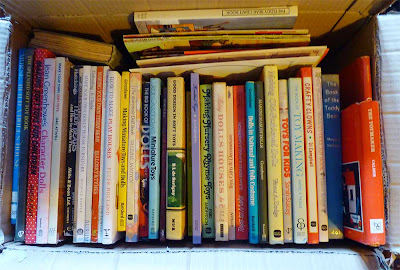 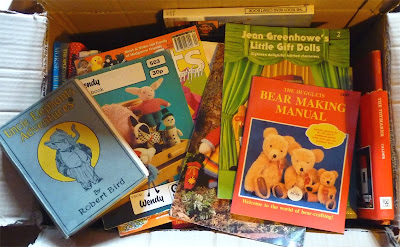 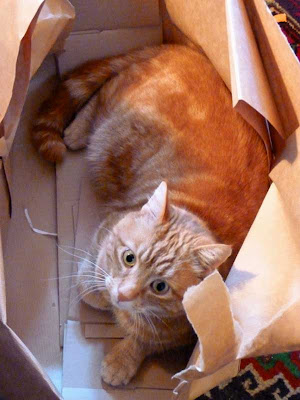 My cheese penny pot was a bit disappointing this year and I was going to forgo the Cerney Cheese we love. But thanks to the generosity of kind Janet, I arrived at the village deli to find a gift order of one Cerney Pyramid and a gammon ham, which I prepared with honey and mustard - this is a rare treat and we have been thanking her through mouthfuls of ham sandwiches. 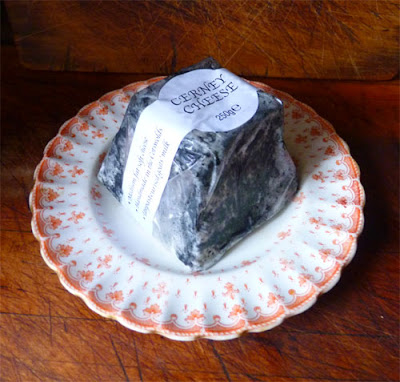 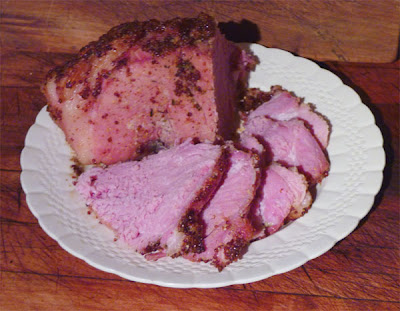 Other blog friends had surprised me with gifts too - I admit to being hopeless at Christmas; if it were a school subject I would get a 'D' and 'could do better!' So I am humbled and a bit awed that anyone could find enough time to take the trouble to send me nice things like this beautiful lavender heart and needle book from Anne of 'Frayed at the Edge'. 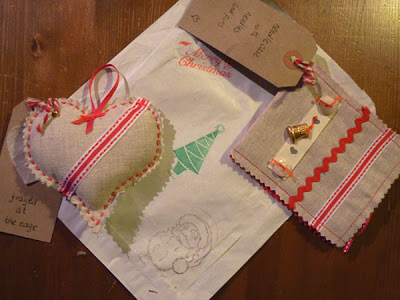 Sooz, of 'Confessions of a Laundry Fairy' sent me this, by one of my favourite modern illustrators, Simon Bartram, who also happens to work for 'my' publishers, Templar as well, and who I briefly met a few years ago. My dear *old* (in the nicest sense of the word) friend Tara, of 'Silver Apples' sent me one of her delightful treasuries of nice things - 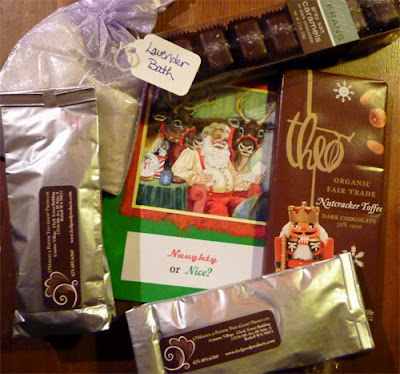 And my even *older* friend (since college days, which was scarily almost two decades ago) Natasha, Queen of Cakes, sent us these little lovelies which I am not sure if we can bear to eat; 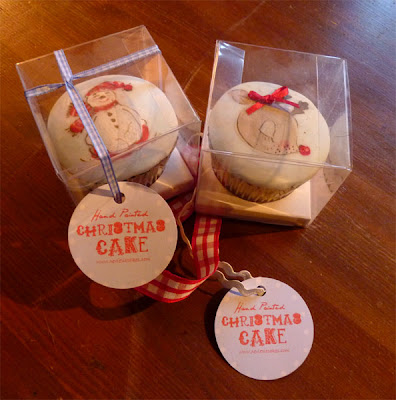 One mystery present was a copy of 'Daring Dos, by Mary Trasko, a book which has been lingering on my Amazon wishlist for a few years - full of amazing (and frankly bonkers) historical wigs, hair styles and fascinating info about how they were contructed and the history of bizarre hair fashion. I can see all kinds of new ideas sprouting from this kind of thing; 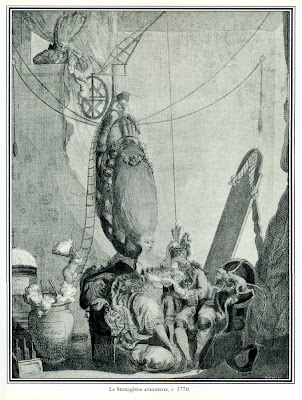 It came without a gift card, so I have no idea who was kind enough to buy this for me - but if they are reading this, then thank you ever so much, I have wanted this for a long time. 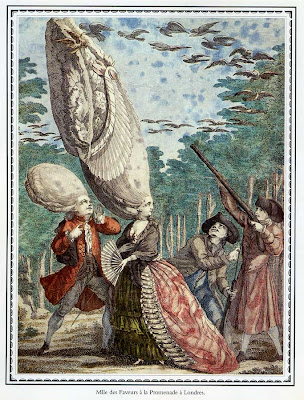 Now that my arm is just at the stiff and awkward stage, I decided to launch the New Year with a little pootle on Marjorie. It was a bit cold and we were both out of puff by the time we trundled home, but yet again I had forgotten how happy cycling makes me feel and how much I love January and the promise of an unwritten twelve months ahead. 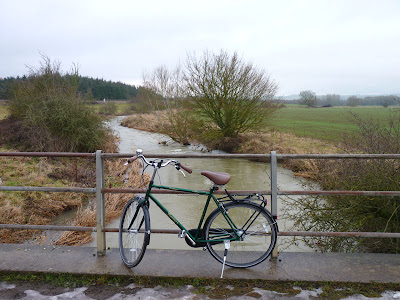 What wonderful goodies, and I'm glad Andy made it home to spend a little time with you. Happy New Year to you all.x

I love your icicles! And what really knid gifts fron Andy's brother. You did well. I hope you have a fabulous year!
xx

Wow. Andy's brother hit the mother lode with those books!

Perhaps you might snag an ale from Andy with the old "look over there!" trick. ;) Then again, some ale fanciers might count that grounds for homicide...

That box of books must be one of the best Christmas presents ever!
Not that I'd make anything from them .... just admire and dream ( so much easier than actually learning to crochet , embroider or handle a glue gun !)
Your Christmas sounds lovely and that ham all too tempting .
Now here's to a Happy New Year !

Hello Gretel,
So glad to see you decided to string those lights....they look so very festive.
As for the the gifts we, your friends, bestow on you.....well I am sure all will agree that it is so easy to give to one who is so very appreciative of the little things in life.

You have something about you Gretel and one day I look forward to joining you on one of those glorious walks and sharing some of that cheese you love so much.

Until then...this internet thing will have to do.

I too look forward to good things in 2011. I have been telling all my USA friends about your wonderful books and I hope they will be available here also.

P.S. cuddle Pumpkin for me!

You have lovely friends, who obviously appreciate you for the equally lovely person you are. Happy New Year.

So glad you had a great christmas. Here's hoping 2011 is much kinder.

so glad that you had a good christmas in the end. the cat makes me all sad as I had a twin one like it until a year ago even as far as the little hairs on the end of his ears. But old age got him in the end. Well Gretel I've heard that it gets us all!!
Oh shut up Gerry you have to be joking.

I'm glad your arm is continuing to improve - and lucky you with all those thoughtful Christmas gifts.

I am smiling at your beer photograph because we have similar photos - we *do* like our Xmas beers. Before our children arrived we enjoyed a couple of trips to the Xmas beer festival in Essen, Belgium. A very wonderful thing. :D

Happy New Year Gretel - what a very lovely Christmas you had in the end. I'm green with envy at your box of books!

What an amazing, thoughtful present from Andy's brother! Remember to pop over and leave a comment to go in the draw for my special giveaway for my 2nd blogiversary/600th post celebrations!

It looks and sounds as if the true spirit of Christmas visited your cottage, with love and warmth and gifts.
I wish you good health and happiness in this new decade. x

and those little cakes are so cute...you're right.... it makes it tough to bite into them....

...and I'm so glad you feel confident and well enough to be on a bike again.. soon you'll be racing over hill and dale with lots of air to spare... wheeeeeeeeee !!! I can almost see it now...

Great post! Thanks for sharing! I have always loved toys since I was a kid and now, I still collect them!

It sounds as though you had a nice Christmas in spite of everything and Andy's brother sounds like an inspired buyer of presents:) I wish you a very Happy New Year and hope that 2011 holds lots of good things for you.

What lovely gifts! I don't think I could bare to eat the lovely cakes either...too beautiful!
The Cerney cheese makes me hungry...yum!
Glad to hear Andy made it home, I wish you both a fantastic, peaceful 2011 full of wonderful surprises :)

Look like you got a very nice Christmas indeed!! Happy January all that it promises.

I can only imagine the kind of "ideas" you get from those pictures of those insane wigs. When a person of your talents gets to work on that kind of inspiration the results could be amazing. I especially loved the picture of your cottage dressed in Christmas icicle decorations. They look much better than the fake ones I'm used to.
Hope 2011 is filled with inspiration and creativity.

What a great post! So glad you had a good holiday. I am a wee bit envious of your box of vintage books as well as ales.
smiLes
L.Buttons

I drooled over your box of toymakers books. There was a time when I made many, mostly TeddyBears, but also geese that honked, little Buddy dolls and dinosaurs. I still have many pieces of fur, real and fake, for the bears. I think I just found a winter project amongst all the snow around me. What a lovely place The Empty Nest has sent me to explore.
BlessYourHeart