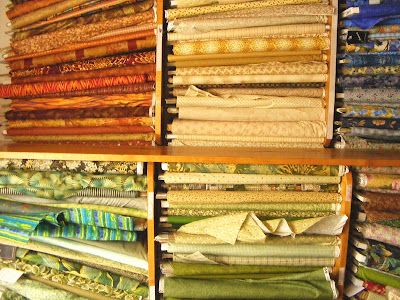 Warning - contains copious amounts of photos for fabric and bees. For last Saturday was the first real day off I've had for weeks and it was planned to be filled with my favourite things, spent with a dear friend, Debs, who has the same interests. 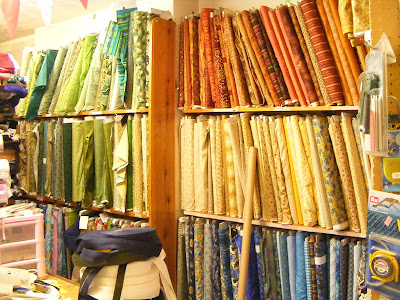 So there was a visit to a fantastic fabric shop in Abingdon, Mason's in Bath Street. It was heaving - anyone who thinks that sewing is going out of fashion should pay it a visit. 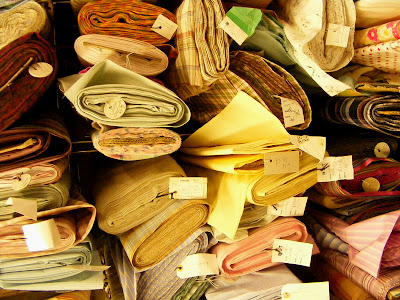 Rammed to the ceiling, literally, with what must be thousands of bolts of every fabric you could need, not to mention haberdashery heaven. 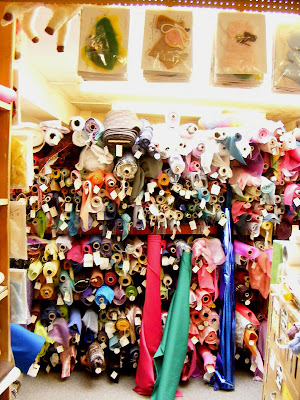 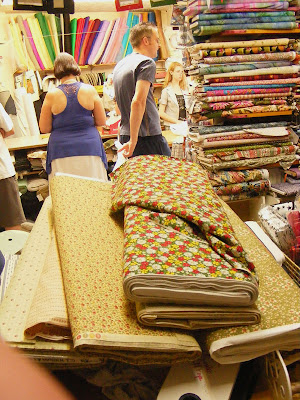 We bought a few little things; the staff at Masons, old and young, are amazing. 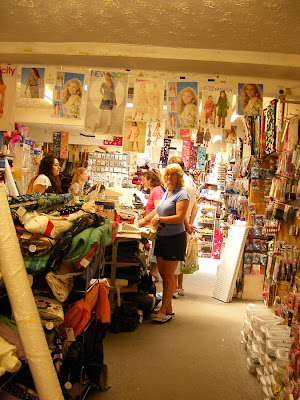 Back to Deb's house, who rather wonderfully fixed up a sensational lunch from the local Cornucopia Deli - in the garden of course, with a jug of Pimms. Feeling somewhat as if I was sitting in a Country Living photoshoot. (This is a good thing). 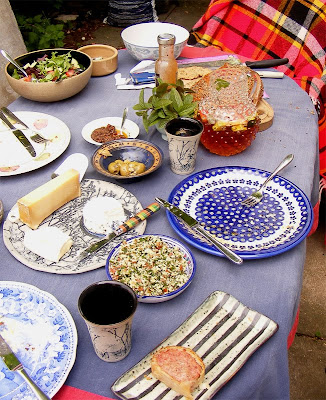 After a pottle off to a garden centre where we *might have* bought one or two plants, we returned to examine her beehive, which has been installed for a few weeks now. 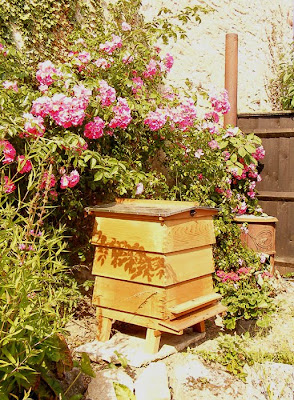 It was fascinating to see the bees constantly too-ing and fro-ing, female workers whose short lives - about 6 weeks - are full of industry. The busy atmosphere reminded me of the women bustling about the fabric shop we'd just been to. 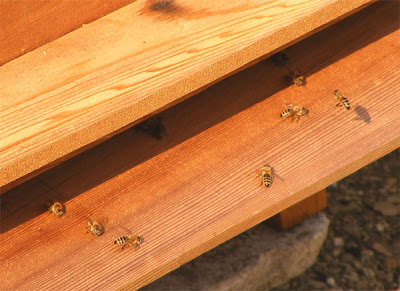 Well protected, Debs began smoking the hive - as far as I gather, they think that there is a threat to the hive by forest fire and begin preparing for flight by eating stored honey. 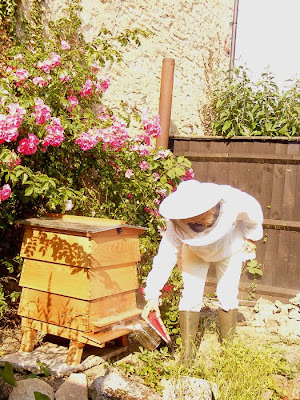 Surrounded by a fair few bees who didn't seem that bothered, the hive was taken apart for inspection. 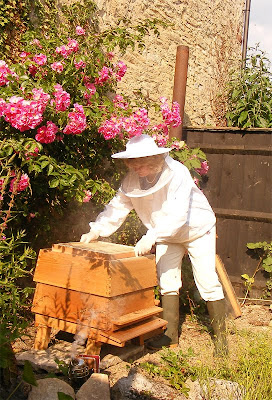 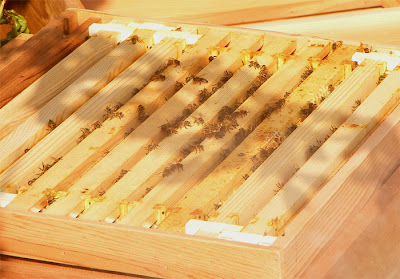 This outer frame is still undeveloped. 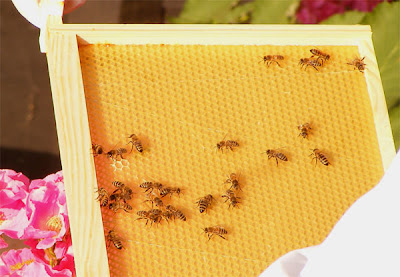 But further on there was more activity. 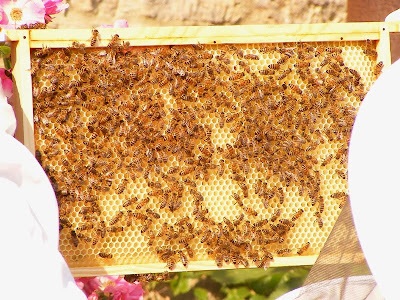 Can you see the queen bee, below? She is larger than the others, with a handy white dot painted on her. She is almost constantly laying eggs, which hatch into more (nearly all female) worker bees - so in a sense the hive is a giant clone of herself. 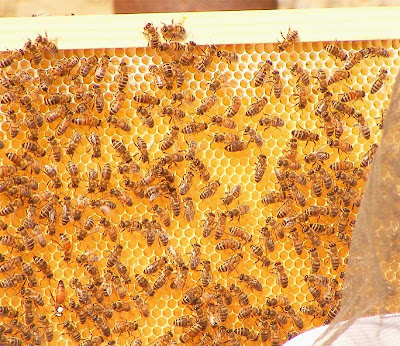 This frame has capped cells, some containing honey and others eggs. Some eggs were hatching as Debs held it up for inspection - and she could see some workers helping them out of their cells. 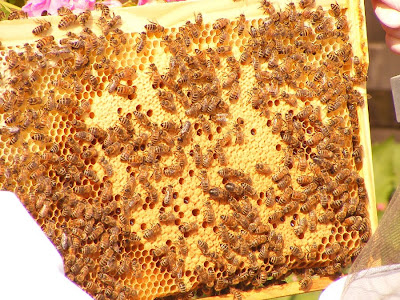 I think there is a big fat drone in the middle down there - the few drones in the hive exist only to mate with a new queen bee, when she takes flight - she may mate 20 times. Something very nasty happens to the drones once the mating process is over, which results in their immediate death. The end result is that the queen has enough sperm inside her to lay eggs for up to five years. Here you can see nectar and honey sparkling in the sun as it oozes from the comb. 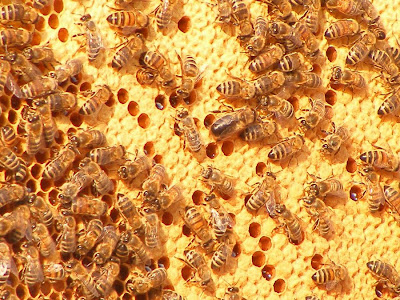 When the hive had been reconstucted (during which time the bees were remarkably calm, even when the smoke ran out), Debs pulled out the board beneath the hive to find the general detritus which is kicked out by the workers - a golden dust of bee droppings, wax and other unknowns. I don't think there is a use for this, unlike almost everything else produced by bees. But it is pretty. 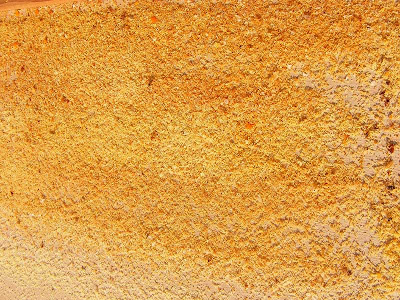 Not only was there a beehive, but a pond full of newts, diving about like miniature, underwater dragons. 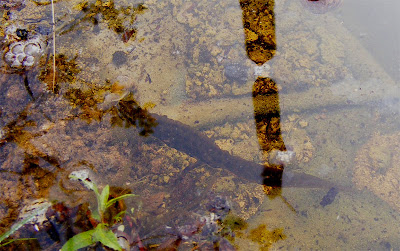 Torn between watching bee-watching or newt-watching, I was saved by tea. Sublime rosewater and pistachio meringues - if you are ever in the vicinity of Cornucopia, do go and buy some; they are handmade by the owner, Sandy. They are fragments of Paradise. 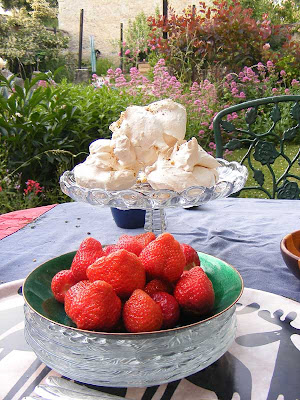 It wasn't a difficult choice. A splendidly calorific end to my day off and warm thanks to Debs and her family for making me so welcome and recharging my almost empty batteries. 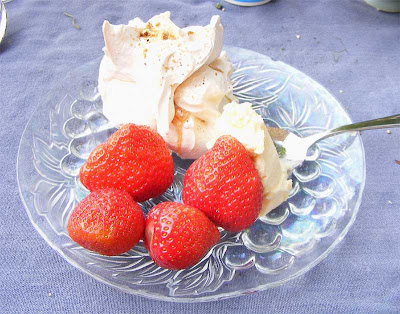 What did I buy from the textile shop? Oh, nothing much... 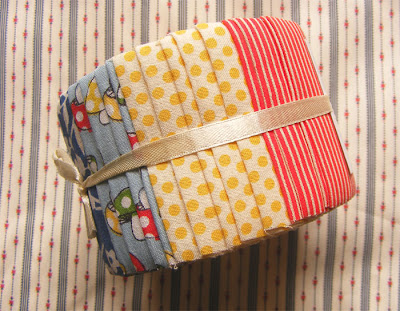 ...just some sweet cotton fabric and what I believe is called a 'jelly roll' of vintage patchwork strips. 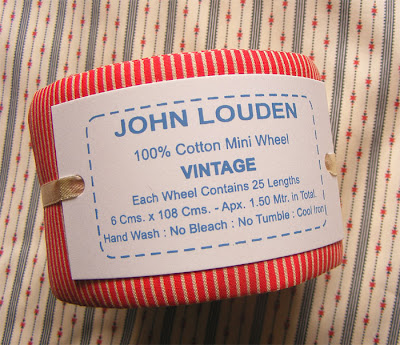 So pretty, it would have been rude not to. 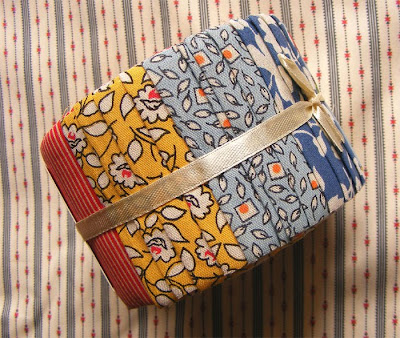 (I am aware that my bee knowledge is rudimentary and happy to be corrected on any points).
Posted by Gretel at 13:22

Gosh, I loved all of this. The bees are completely fascinating. Just another world altogether. I can only imagine how beautiful your friend's garden is with all that bee help.

And I would just lose my mind in the fabric shop.
Thanks so sharing such a lovely day.

Fascinating look at the inside of a hive, and what a lovely way to spend your day off. Thanks for sharing it. Now I know nothing about bees but I do know that 'Jelly Roll' used to be a euphemism for a penis!

What a nice day off! Thanks for sharing all the great photos.
I would have been sorely tempted by that jelly roll of fabric too - I always find fabric shops inspiring with the colours and tones and patterns together in palettes.
Also, I love those plates at Cornucopia!

Good Lord, did it really?! I suppose that explains Jelly Roll Morton the musician...I shall never look at my patchwork strips in quite the same way again. :)

What a fabulous day - no wonder it recharged your batteries. I wish that deli was closer .....!

What a fabulous day - no wonder it recharged your batteries. I wish that deli was closer .....!

What a fantastic day you had! I love fabric shops like that - would like to get my hands on a couple of those rolls of fabric!
Fascinating to see the workings of the hive.

Looks like you had a fabulous day! Wish I could have joined you!

Ohhh, all that beautiful fabric. And it looks as though you had a delicious lunch to boot.

I'd never heard "jelly roll" used as a euphemism before, either. Guess you learn something every day...

Can't help with bees I'm afraid, except to say that I used your sugar trick a couple of days ago and it seemed to revive a particularly sluggish beauty of the bumble variety!
Sounds like you had a well deserved rest and I'm glad you found the time to share it with us.

How lovely to see a hive in action and to know that bees are thriving.

It looks like you had a great day, I wonder what you will make with that delightful jelly roll?

What a day! That does your soul good. And what a lovely friend. Always good to have such a great friend. thanks for the bee info.Never know when "him outside" might decide that bees are the next big thing!

Glad you had such a good day. Must remember that shop in Abingdon.

Thanks for that colour mix - I'll definitely be trying it. Apparently jelly roll also means sex! However it also has lots of other meanings I hadn't heard of - Wiki actually has a page - http://en.wikipedia.org/wiki/Jelly_roll

One day I am going to get to come to England in the summer and enjoy your gardens. So far we have only been there in the winter when it is not as beautiful.

What a fabulous day out! I have some of those fabrics - but I bought mine in Singapore!! Thank you for adding me to your blog list - of course you are on mine!! Have a lovely weekend and finish recharging your batteries!
Anne x

Oh Gretel, what a wonderful post...I almost felt your refreshment ;-) I loved Deb's mis-matched plates and crystal dessert set ..the berries looked mouth watering. Very envious of your vintage jelly roll...so cute. I can't wait to see what you might do with it once you have time to play with your sewing machine. The bee tutorial was so interesting and I loved the close photos...what a treat for you. Below is a quote from The Fat Quarter Shop about Jelly Rolls:

"Jelly Rolls are collections of 2.5" x 44" strips of fabric. They typically include 40 strips of fabric but can vary. Jelly Rolls are a wider version of a Honey Bun. We also include Twice the Charm, Fat Rolls, Sushi Rolls, Bali Pops and Charming Jelly Cakes in this department. They are slightly different sizes but similar items."

Loved reading and reliving the day, Gretel. I enjoyed myself so much :-) Thank you for writing up all we did with such care and giving it a backdrop of great photos. I am going to try to work out how to save some of the bee pictures you have taken, if that is okay?

You are a star pupil, too, learning as much about bees in that one afternoon as I have learned so far in my half a year of lessons!

Any ideas yet of what you are going to do with the exquisite striped cotton? I thought how it would make a perfect apron for a French House Mouse, or alternatively, a pair of pretty cami knickers for me... if I wore such things!

Do we have to wait another year for the same excuse in order to treat ourselves to a day like that again? I hope not!

What a wonderful day off you have had. The fabric shop does look pretty marvelous, but...it is the bee photos that have really captivated me.

I learned so much from this post, and was reminded of much about bees that I had forgotten.

Many thanks, PG. Hoping that you soon again will have another wonderful day off. xo

The perfect day out !!

What a very nice day! Thank you for sharing it. x

What a lovely post, about a lovely day! Lucky you, I love fabric, bees and newts too! The meringues sound delicious..

What a way to spend a day off! And how informative it's been. . . I've been doing it wrong for years! Have to admit that I could spend DAYS in that fabric shop, and another few days just sitting in the garden. . . . hope you're refreshed and rested.

Some days are just SO special aren't they. I now have a new word in my vocabulary: Jellyroll........ (and I also had an educational time researching all the different meanings). I sat lusting after those delicious sounding meringues. They sound soooo special.

fab post - i was enthralled. splendid bees, lovely fabric and i love the strawberries xx

Bees. Love them. And a curious symmetry between the photos of bees on the combs, and people in amongst the fabrics. Ha !

oooohhh! what's not to love about strawberries and meringue plus a trip to a new fabric shop plus visits with bees and toads and newts.
Lucky you!!!

oooohhh! what's not to love about strawberries and meringue plus a trip to a new fabric shop plus visits with bees and toads and newts.
Lucky you!!!