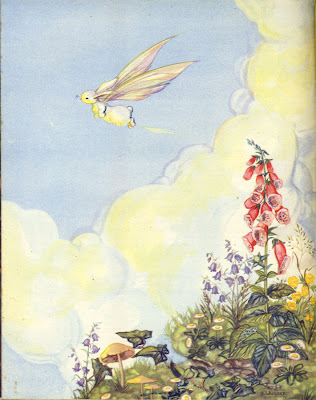 Being properly better at last is enough to make me attempt to click my heels in the air with glee. And thank you to everyone for being so kind in their comments and emails. I hope I am never that wiped out by anything again - too tedious. But terribly touched to be sent gifts for my well being - a care bundle from kind Ann of Frayed at the Edge - lavender bags, warm wristlets, oh-so-welcome tissues - 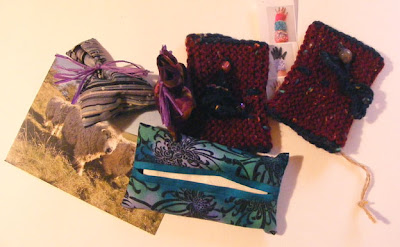 - and a double wrapped parcel papered with eclectic bits and bobs, which could only come from my letter-pressing ephemera-loving friend. I was feeling lousy when I opened it, but I smiled as I unwrapped it - 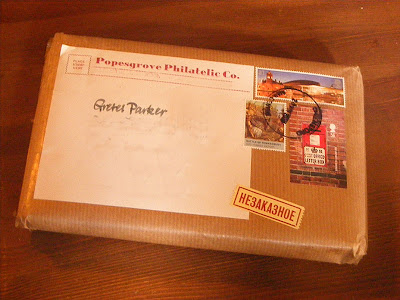 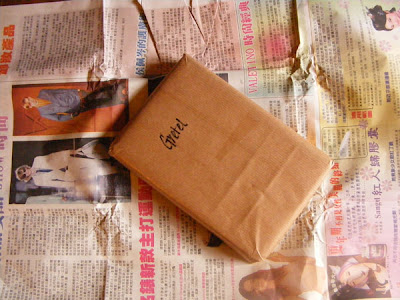 Under interesting and distracting paper diversities, such as this ever-so-slightly crotchety (but very amusing) response to the now ubiquitous 'Keep Calm' band wagon - 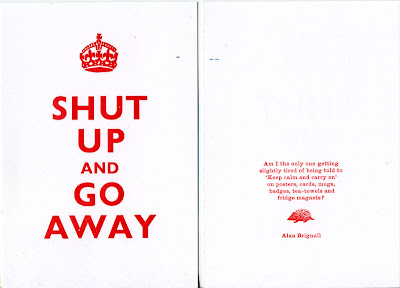 - was a beautifully scripted note on letter pressed note paper, alongside an ex-library edition of John Masefield's 'Midnight Folk' which I haven't read since I was a child, decorated with lovely line illustrations by Rowland Hilder. Thank you so much. 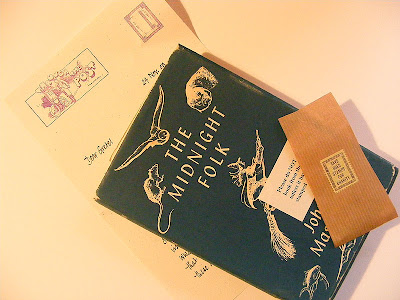 Andy, like a well trained truffle hound, is now very good at finding books which he's never heard of, but after eighteen years with me, senses to be collectible or valuable - or both. He out-did himself with this one, picked up for 50p. Pookie the Fairy Rabbit is not my era, nor did I have his books when I was little, but as a collector I know it by reputation (and value), especially a scarce early edition in spiffy condition like this one. Nice one Andy! 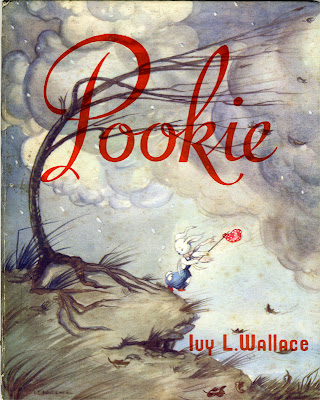 Having sold several calendars, I decided to spread the love and treat myself to one (number 44 out of one hundred) of Jake Parker's brilliant limited edition book, showing his one-a-day ink sketches from 'Inktober' - now, understandably sold out. Isn't the linework gorgeous? 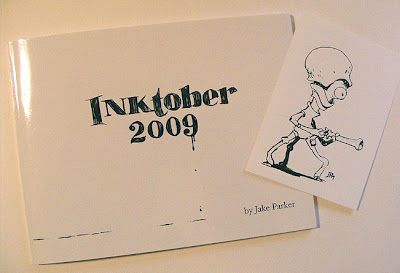 The heroic man even included an original artwork with each and every one, which is a bit above and beyond the call of duty, but lucky for those of us who invested in the book. 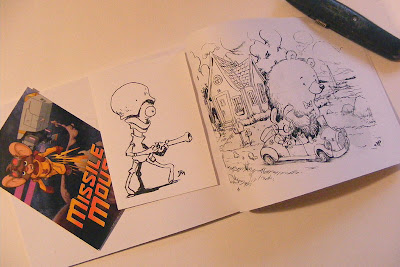 However, the best thing to arrive in the post was a photo which I have never seen, of my mum and a small me outside an aunty's house. It was found by her daughter and she thought I'd like it. I have so few childhood photos, most of them taken by other people, and only a handful from my early years. We didn't have a camera; we didn't have much of anything. At the time this was taken, my parents, unmarried and having run off together, were living from hand to mouth on benefits, my elderly alcoholic dad being a chronic invalid, and unable to work. There were two rooms. We had two old single beds in one of them, me sleeping with mum, my dad in the other, in a flat in a slummy converted Victorian house in Exeter. The walls were damp, there was a two bar electric heater, no fridge (which is why I hate Carnation milk - we used that instead of fresh as it wouldn't go off) and the most modern thing we had was an old battery powered radio - even in the late 1960's this was a bit unusual.

There was one lavatory shared between several people, and in the winter when the pipes froze, we had to go across to the public facilities in the local park. Much of this I remember, some of it my mum told me; she often talked to me about things she probably didn't realise I was taking in and which I would never forget. 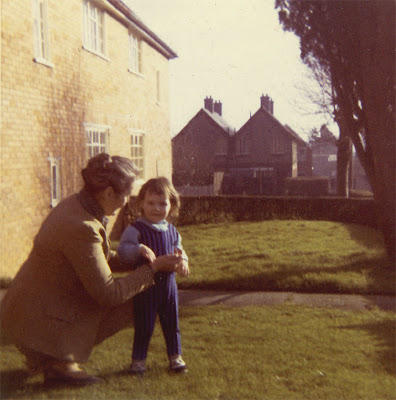 Under the circumstances, cameras - expensive items in those days - and retaining memories were probably the last things on my parent's minds. But this precious little snapshot reminds me that once, a long time ago, I had a mother who loved me very much, even if I didn't have her for very long. 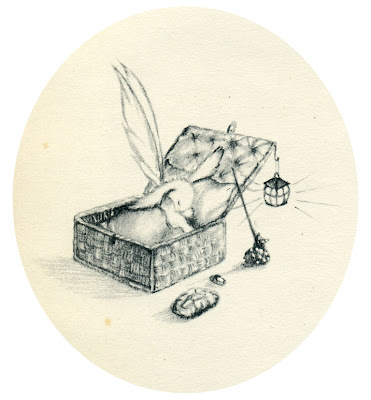 The Winter online edition of UK Handmade is now available, including a Q&A between myself and Rima and Tui of the Hermitage (pages 40-45)

and finally
I am the very first featured artist on the Wingham Woolwork website with a selection of my needle felt work - thank you very much to them.

and really and truly finally -
We are out walking again, and there are two beautiful new walks recorded in Chedworth and Eastleach on my Cotswold Peeps blog.

Glad to see you back ... and with such a lovely post! (You do know how to tug those heart strings)
All the best
-GailXX

I always want to comment on your posts but I never know what to say... I do so enjoy everything you write about and your perspective on life. Lovely walks on the Peeps too :-)

Glad you're back! That was a very moving story about your family - memories are indeed precious and we should pass them on while we can! I'll have to check out all your links - but right now I have to do tonight's post!!

congrats on being a featured artist...I'm off to check that out....

my wrist is out of action with carpal tunnel, a massive cluster ganglion and now... De Quervain's.... no stabbing or holding tiny bits for me now... for a few months it seems if I want the tendons to stop graabbing each other on the way by... ooch.......

Gretel it is so lovely to see you back and hopefully up to full health strength again! I love hearing stories about your childhood and family as they are so moving and your memories are very rich in detail. Congratulations on being featured artist on Wingham (I am always itching to order more wool in all their fabulous colours!)

Take care and go gently on the work!

Good to have you back online. Read the Q&A with Rima - as I regularly follow both of your blogs it was nice to 'sit in' on your chat.
Take it slowly and have a great Christmas.

Glad you are back and hopefully fit once again. Wonderful to get that photo out of the blue - how very special.
Pookie - my FAVOURITE book when I was a child, I simply adored Pookie and bought a new copy for my own daughter. Wish I'd kept the original!

Look after yourself,
C.x

What a moving and charming account of the photo of you and your Mum. A memento to be cherished.

So glad you are completely better! I have never come across pookie, but I LOVED the Midnight Folk as a child ( and still do now - my copy is sellotaped together, and almost falling to bits)

So glad to hear you're better. I found you memories of childhood very moving.

That photo is so beautiful and valuable without measure. Don't you ever tell yourself to shut up, Gretel! There are far too many of us out here in the wide world who love all that you show and tell.

(I have read your article in UK Handmade ... great to find out a bit more about that other facinating creative duo.)

Cooee from Downunder, Glad you are back on deck Gretel and feeling better. Lovely post and congratulations on the feature. Sending very "warm" wishes for a happy and healthy 2010 fromn OZ.

That photo is many times worth its weight in gold.

So glad you are feeling better - we missed your fascinating blogs! Well done on the UK handmade and Wingham.

Lovely to read your blog again and glad you are feeling better.
What a lovely picture of you and your Mum, she looks very elegant!
I bought Paul the Keep Calm poster years ago(we are very ahead of the pack) but I think he would relly love the Shut up and go away version. Can you buy it anywhere?

I'm glad to see you're back and well again, I enjoy this blog and Cotswold peeps so much.
Regards from Italy.

Thank you for your kind comments Gretel, and I know you are partial to a little pheasant too :)

I'm sorry you've been unwell, but you have pushed yourself this year. It's had it's rewards, but now you must take some rest. So many things to comment on, so until now, I've not!

I found this post very moving. That's all I can say, apart from have a hug from me over the net. Also, I love Pookie :) and well done on being the featured artist for Wingham Wools, a hooooge well done in fact :)

It is so wonderful to hear that you are feeling better. It is hard to bounce back sometimes after you are already sick once.
Take good care of yourself. Get lots of rest for sure.

Loved reading your article in the magazine...It must be so exciting for you.

A very sensitive post, what a precious photo. Loved your interview in the online magazine. It intrigued me because of the music and artwork of the couple, but also because my dreadlocked son lives in a caravan on a hillside overlooking Pilton and various of his friends live in converted horseboxes..... What a talented pair your friends are.

Glad you're better. I loved Pookie whn I was little but I have no idea what happened to my book.
And congratulations on WWW feature.

Ah books, what a joy!
Sometimes our mothers,if with us for a short time leave memories that are better than the reality might have been if they'd stayed around longer.
Happy Christmas! Lovely blog!

I've only just found out you were poorly, but I'm really pleased you're feeling a little better now. Scrolling through your blogs I noticed Pookie! I'd forgotten that one, thanks for the memory.

I missed reading this! Happy New Year Gretel. And much luck to you in this new decade.