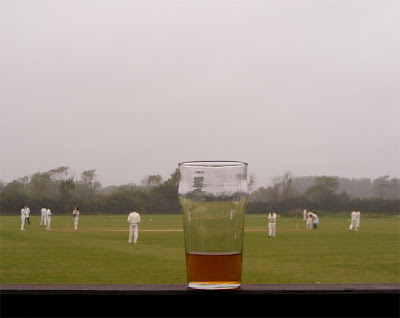 Our cricket season draws to a close, heralded by the annual President's Match and beer festival. For the last seven years, since leaving our old home, we have commuted back to play cricket. Andy thought about joining another club, but our hearts and friends are here; they are not things you drop lightly. It's about 15 miles away via the lanes, and as it was a special occasion we stayed the night over with a lovely friend.


The President's game is a friendly between old and existing members of our cricket club; the President picks what he hopes will be a crack team of retired or moved-away players, and the Club - mostly the youngsters - play them. This year the Club wore silly hats. It is a light hearted affair, bolstered by beer and good humour. 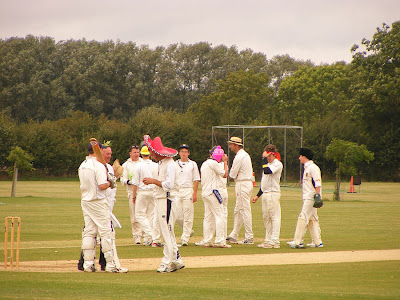 Naturally, this being a summer game, held in August, it was cold and windy. We were joined by Eynsham Morris, who usually dance in the tea interval. Eynsham Morris has been in recorded existence since 1856, and is thought to go back beyond, to the 17th and 18th centuries. Cecil Sharpe, the renowned collector of folk dances, witnessed them dance in the now closed Railway Inn, in 1908.

“The dancers met me, I remember, one dull, wet afternoon in mid winter, in an ill-lighted upper room of a wayside inn. They came straight from the fields in their working clothes, sodden with mud, and danced in boots heavily weighted with mud to the music of a mouth organ, indifferently played. The depression which not unnaturally lay heavily upon us all at the start was, however, as by a miracle dispelled immediately the dance began, and they gave me as fine an exhibition of Morris dancing as it has ever been my good fortune to see.”
(CJ. Sharp, The Morris Book, part III, 2nd edn. 1924)

The Eynsham Morris website is full of the team's fascinating, rich history and well worth a browse. 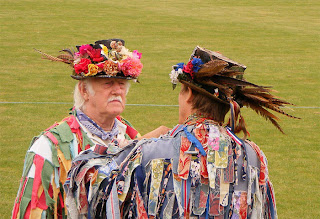 They are one of the things I still miss about our old village. They trickled in one by one, standing to watch the game and get an early beer or two in. 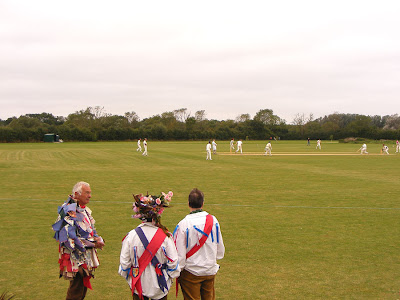 When the first innings was over and everyone trooped in for tea (or beer) and to partake of the good spread provided by the President's wife, they began dancing. 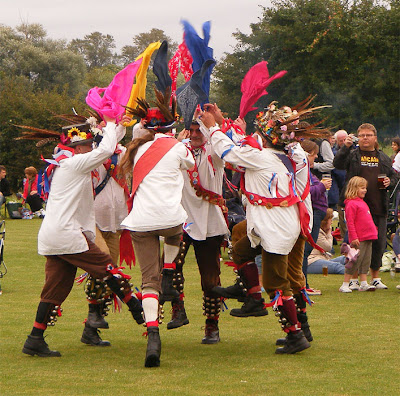 The highlight was the village 'in-joke', whereupon a pretty young lady volunteer becomes the centre of the dance; 'Maid of the Mill', otherwise known as the Eynsham Morris fertility dance. Various sweet and, one suspects, suggestive things are whispered to her, as the dancers 'court' her, to the barely concealed amusement of the onlookers, most of whom know how the dance ends.

I spent most of the second inning sat in the pavilion with friends and had one of the most disgusting pints of real ale I have ever had the misfortune to imbibe. It was called 'Grunter' and tasted as if someone had put several cigarette butts in the barrel. Should you come across this revolting and thankfully rare beer - avoid. 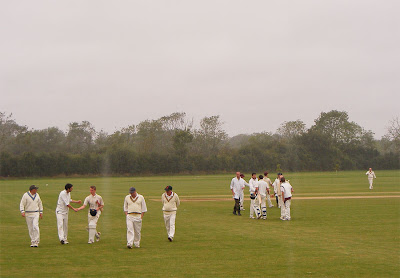 We - that is to say, the Club, for whom Andy was playing - lost, pretty rapidly, and not before time. All this cold, grim day was lacking was rain, and sure enough, it arrived. As is customary at the end of every match, everyone shook hands like gentlemen, even though they were all familiar and close friends.

With the near end of the season and the beginning of autumn proper, I have been frantically tackling tasks and chores in preparation for a new batch of commercial work which arrived, as I thought it would, this week. I am almost at the end of my commissions list. Including this chap; a portrait and a little different to what I normally do. 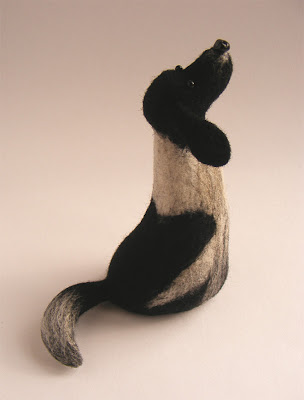 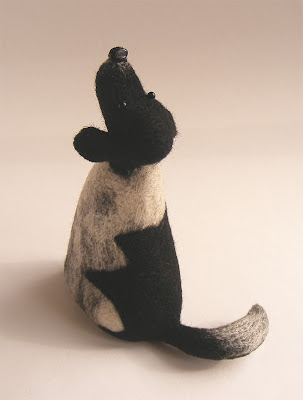 With my new exercise regime still going strong, I have begun recording my almost-daily wanderings in a new blog, 'Cotswolds Peeps' - more for my own pleasure than anything. It's a kind of record of the countryside, and the tiny things that happen in the natural world, which I find interesting. And, of course, the ever-changing weather. 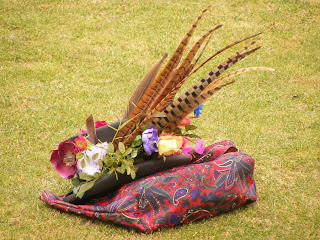 Crikey, I often drive 15 miles several times a day, lol. I wonder if anyone has ever wondered if maybe they buy some new clothes maybe they wouldn't need a fertility dance? Just funnin' ya, I'm gonna have to get me one of those, ahem, jackets. Thanks for the heads up about the Grunter. My husband often makes it over to England and he will appreciate the warning.

What a wonderful post! I LOVE reading your blog and will have to take a peek at your new one. I have always been fascinated by Morris Dancers...and love cool, damp weather....could I be a long lost English soul??
LOVE, LOVE, LOVE the new dog figure!!

really like the dog, the blending in the tail's beatiful...
toby.

Wow Gretel, a lot of things happened here this summer! You're sewing, it's wonderful news, and the new blog it's a great idea.
If you still want sunny days, come to Barcelona and I'll come to your place. I want some rain, pleaaaase!

How could it be the close of the cricket season? Thank you so much for the marvelous video. I could tell that the sky looked very heavy.

The new dog in town has got such a personality. Well done!

I will surely have a look see at you new site. It's grand to see some beautiful country through the eyes of someone who truly appreciates where she lives. Keep up all that fitness business!

I love, love, LOVE the dog!! Hmmm, I have two dogs you know.......something to think about for the future!

Oh, I love your little dog, he reminds me of my own dear Ted.

I have had a summer dominated by cricket on the telly. I cannot understand why it is so important not to get the ball wet, my suggestion of having a set of dry balls at the ready was met with pitying looks of incredulity.

Does she get to keep the hat?? I think I would insist upon that.

I adore the dog!! Such personality! I suppose if you did Edward as a toy, it would end up rather like one of your lovely polar bears!!

What a cool dog!
Hmmm, our local Morris Dancers are forever spilling out of the pub and stopping the traffic while they do yet another dance in the road. I can't decide whether I love them or hate them!

Full of beautiful (and amusing!) hats. I especially like the cricketer's sombrero. And your little felted dog is personality plus.

I love Morris Dancers. We were driving through Otley in Yorkshire, on our way to watch our rugby team play at their ground and were held up in the town by hoards of Morris Men crossing the road etc, on their way to a MM competition! It was great seeing the different costumes, I almost wished I was going to watch them....but the rugby beckoned, and we won, so that was ok.
And I LOVE the doggie!

Great post and pics (as usual :) I'll remember that warning of the Grunter, but it makes me want to give it a try to see just how bad it is, haha! I think the one I steer clear of is Old Peculiar, whew! Great post...I'm over to take a look at your other blog! ~ER~

Thank you so much for sharing the video of the Morris dancers. I love watching them. They are so hard to find in the US.

Meanwhile, my husband, who used to live in Bretforton, is trying very hard to figure out what village in the Cotswolds you live in. He thinks he finally worked it out. He is a bit like a dog with a bone on things like that. :)

ooooh i love this dog, he is lovely

Fun sort of day and it couldn't be anywhere else but England! The Morris Dancers were great. I love your little felted dog, he's really lifelike.

I have just caught up with your three latest posts and they are so lovely . Congratulations on the bear shop success. i comment here becasue I loved the Morris men and the fact that you once lived in a village where this happens.
I also wante dto say how much I love the dog. Is it a pointer?