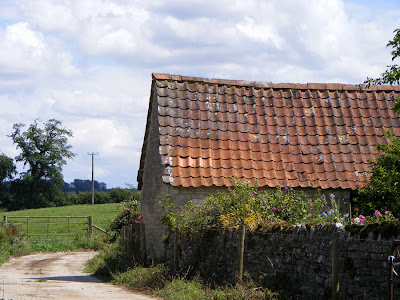 My walks and cycling have been curtailed for some weeks, thanks to something I did to my ankle (not sure what but it stopped me going anywhere far) which took forever to get better and then getting a nasty little cold. But yesterday, after days of patchy rain, the sun shone and we went across the border to one of our favourite circuits. We had the usual quiet adventures which make us happy; ogling an empty (and gorgeous) old stone house and imagining what we would do with if it were ours...spotting fat brown trout in the crystal clear waters of a stream...finding a Victorian bottle bank on someone's land, naughtily trespassing to investigate and the ensuing disappointment of discovering it all broken. 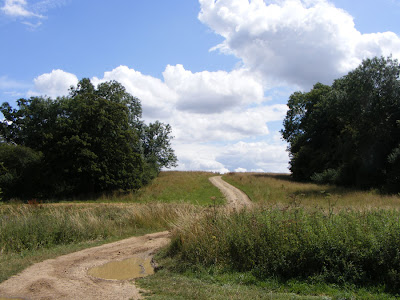 However, these little joys were eclipsed by the proliferation of butterflies, enjoying the muggy heat. This estate leaves strips of 'scrub' for wildlife and they are havens for once common species, now sadly not-so-common. I haven't seen so many butterflies in one place for a long time, and set about 'catching' them - in the nicest possible way. 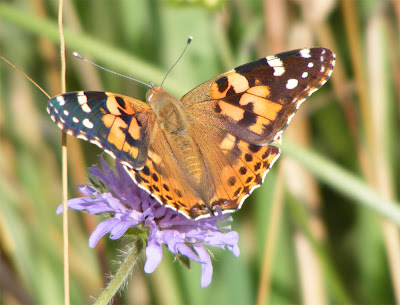 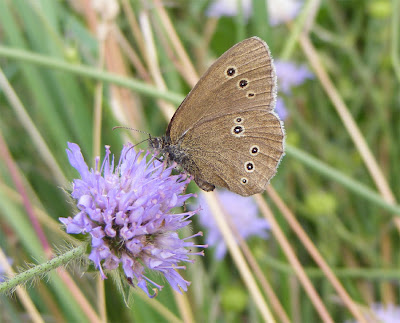 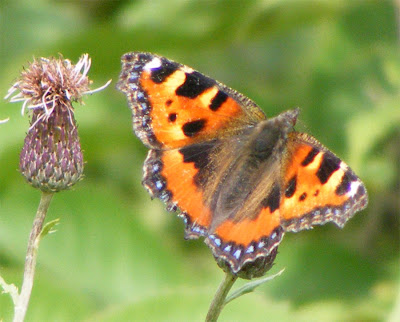 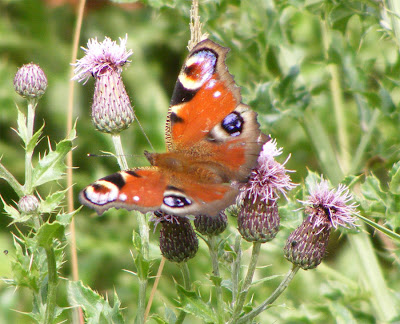 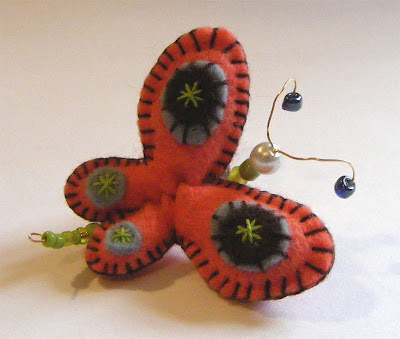 Today I was not so lucky with the weather. It was nice enough, when my trusty/rusty old bike, Hercules and I set off for a quick jaunt round the lanes. 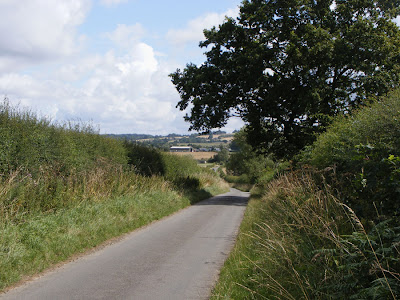 We are so close to the county border that I can switch in and out of Oxfordshire/Gloucestershire within a few miles of cycling. By the time I was in Gloucestershire, the monstrous dark clouds which had been glooming behind me, finally caught up and the skies opened. Not much to do except keep pedalling. The clouds chased me all the way back into Oxfordshire. 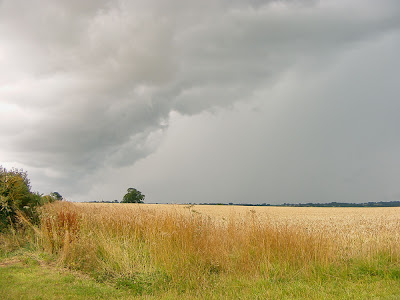 Despite being soaked through, I still enjoyed the contrast of the brightly lit landscape against dark skies. By the time I was nearing the woods, there was a bit of thunder and lightning thrown in, for extra excitement. 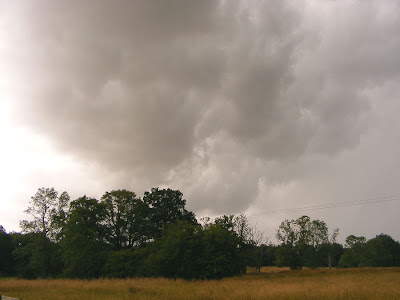 Had to get off to walk round these puddles. The holey tree on the right is what we call the 'hornet tree' - where we once watched the goings on of busy hornets, and a couple of years later found the remnants of honeycomb which had dropped down the trunk. 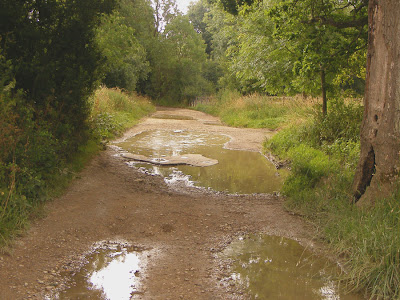 Drenched as I was, I felt a pang of sympathy for the farmer trying to cut his hay; like me he must have started when the sun was out, and like me, he'd been caught out. 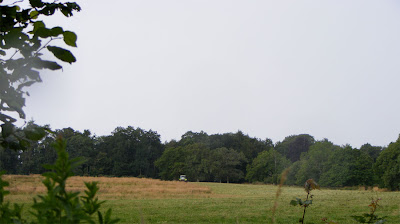 The wind decided to get up, and if anything, the rain came down even harder. I cycled the last couple of miles home soaked to the skin and water almost blinding my eyes.
Naturally, by the time I was back in the village, it had stopped. 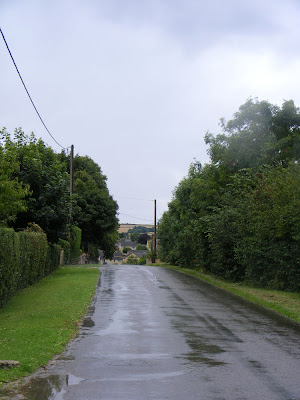 Email ThisBlogThis!Share to TwitterShare to FacebookShare to Pinterest
Labels: Cotswold countryside, Cotswolds, getting soaked in the rain, summer showers

Thank you for sharing those beautiful pictures.

I loved your "poor imitation" butterfly a lot!

what gorgeous photos, I haven't been to the Cotswolds for a very long time! I love the butterfly photos, and your 'clumsy imitation' is beautiful!

Great captures, photographically, of those butterflies. I enjoy getting out and about with you, vicariously though that may be!

My Word Veri: arear, in which, plural, I often find myself!

Beautiful photos! Lovely to see the winding green lane, and the butterflies :0)

Oh yes, Gretel, I AM enjoying the pics WHILE I am sobbing. Thank you very much! :) I used to stay long stays in Gloucestershire with my ex-Brit-husband who was from there and where I almost lived. I loved the pics and your way of telling it all, makes me feel as if I were there. Thank you :)

All your butterflies, airborne and felted, are fabulous. When I have been in the Park recently, I just kept hoping to see bees buzzing or butterfly beauties hovering ... and I saw none of them. Did seem some tiny ripening quince in the Shakespeare Garden.

Hoping that your pedaling through those miles of rainy, sumptuous countryside did not set your ankle back at all. I know that all of us who see your photographs will be enriched.

I've been waiting all day for a predicted thunderstorm. Carried my little umbrella around for naught. Air is a bit heavy, so perhaps there will be a very late thunder and lightening show.

I love your wooly butterfly. And the mere mention of the name Cotswolds, makes me want to move to the United Kingdom. :)

Beautiful butterfly pics. My husband was just reading an article about painted ladies..how they fly from Morocco...its a long journey..I did it on a plane!

Second attempt at leaving a comment: here goes: I have just come over to you from Jackie, who left a comment on my blog. Have had a couple of wonderful butterfly filled days. Loads of Painted Ladies, Peacocks and most abundant of all: Gatekeepers. Have also seen commas (2) and a Red Admiral. The most butterflies I have seen in years. Can't be bad, can it?

I'm always heartened to hear of more butterflies reports. (I think I've seen more honeybees this year than I have in awhile. It's still not a lot, but more than the past several years).

Someday, I'd love to see pictures of your actual village. I can now picture the countryside about you fairly well, and the interior of your cottage, but not your immediate outdoor environment.

Beautiful photos, and the your imposter butterfly is very sweet.

Lovely butterfly photos! Spent ages yesterday trying to photograph a friendly fritillary - they are liking our flowery garden at the moment.
We've had these deluges too this week, but so far I've managed to dodge them!

Absolutely have no idea how I got here but love your photos, especially the last butterfly! Isn't England pretty damned gorgeous. Just the rain that gets in the bloomin' way.

Wonderful photographs Gretel, very lovely. Sorry that you've had a dodgy ankle and a cold, take good care of yourself my dearie. x

hello Gretel, I just wanted to let you know that Willow House has finally given up the ghost. I haven't entirely given up on blogging though, I can be found over at Murder and Mayhem, of course I'd love to see you there sometime.

I agree with everyone, it seems, lovely photo :~) How nice of those butterflies to pose for their portraits.

I thought I'd left a comment already, but PC gremlins (and a son who likes to tidy up his mother's settings for her) may have interfered. Anyway, lovely photos, and so interesting to read that Painted Ladies (lots here in our city streets this year!) come from Morocco.

Beautiful, always love your photos and your creations.

Love visiting your lovely corner of the world...rain or shine. Great photos.

Oh love your little flutterby, it's so precious :) Those cloudy skies look so dramatic, what an eventful ride!

I love the clumsy imitation b-fly, too! What a happy blog!

Your photos are beautiful and the little butterfly is just adorable!

Oh I love your butterfly!!! You couldn't not create something wonderful. Thanks for sharing you beautiful photos.

What a lovely post from a beautiful and talented soul.

Beautiful butterflies!
There seem to be more around this year which is wonderful :)

I used to have a bike called Hercules too :)

I came back here to invite you to see my roads - again, interesting connections on the web. I'm seeing a lot of roads. Pop in and take a look.

I love to take butterflies pictures too, they are magic! And you have to be very very quiet, they're so sensitive!
So, it's raining a lot, what a contrast, here the sun is shining and it's too hot! I know, that's what you want, shiny days...
I give you one of mine's

Wow, I'm definately going to look out for that clumy imitation butterfly next time I am out and about, it's beautiful!
Sun and rain seem to be the theme of this summer, it's good growing weather on the allotment I guess.
Kim xx

Reading your posts about your home area is like peeping into another, peaceful little world! I love your felted butterfly...it would make a cool hairclip!

Funny, when I make up my mind that I'm just going to get wet, I don't mind it so much. It's when I try to hide from it that it seems unpleasant. There's probably a moral in that somewhere, but I'll think about it later.

Brilliant pictures. I love getting caught in the rain like that. I makes me laugh and laugh!
CKx

That last picture: I can almost smell it!

I think that your butterfly should be described as "tribute" -- not imitation! (Is it a particularly good year for butterflies? I've been noticing them all over blog-land. If you have time, please do visit Box Elder -- on my blogroll -- for some gorgeous pictures and musings on the subject.)