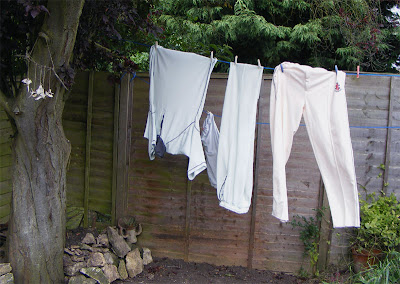 Ooops...another little forgetful moment and Andy's last remaining cricket whites are white no longer...looked at in real life, they are a delicate aquamarine. The trousers are a dainty blush pink (I managed to ruin them last season, they are on the line courtesy of my Beloved to point out the rainbow effect). We have two matches at the weekend, one against West Midlands Police. He may come in for some stick. Or as his Facebook entry today read;


"Andy now has some turquoise grey 'whites' to go with his 'peachy pink' whites, I fear it may be a long weekend in the sledging department" 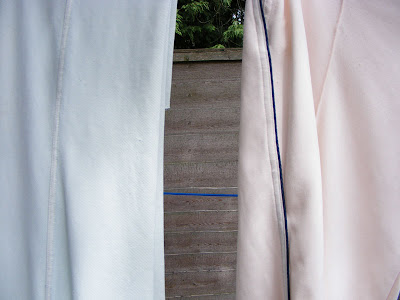 For those not in the know, sledging is the banter used in the field by teams amongst each other and aimed at the oppo. It is often obscure, unless you know everyone, and frequently sweary. Especially our lot, Eynsham CC, seen (and heard, at volume) at Stanton Harcourt village last Tuesday night. An apparently 'friendly' match at a neighbouring village, with the Stanton Harcourt batsman 'Gherko' getting a bit of ribbing. There is something very funny about the way he is got out, but you have to know about cricket to appreciate the joke. It's a bit beyond me. It was all very good humoured, even though we lost in the end. Andy is the very tall one seen on the right hand side, in the pale cap - a tender reminder of how pristine his whites once were.

Oops! But at least you got any grass stains out!

Isn't cricket the game of gentleman? ;)

Good lord, you can't bleach them, they'd turn out even worse! He will have to wear them anyway, poor boy.

I'm with you on this one. My son frequently went to school with slightly pink PE kit. Made a man of him, I reckon(not sure he'd agree though)....

Oh my! No worries. It happens to everyone. Dh washed his jeans with something red by accident and now every stitch, every light area of his blue jeans are pink. They look like purple jeans and he won't set foot in them! ha

OMG, Gretel..this post brings back memories of when I was experimenting with tie-dying and needed some 100% cotton. The only handy cotton I could find was my two boys underwear. Needless to say they came home from school one day in a fit because they were teased relentlessly when it came time to change in the locker room in their phys ed. class ;-(...haven't done that again!

I thought the trend in cricket was towards multi-coloured pyjamas anyway - I can't recall seeing a 20/20 team wear whites. He could just say he's setting a future trend for village cricket.

Imagine my surprise to come upon a cricket match in the US! They seemed pretty competent (well, to me . . .)

I'm thinking maybe he could make a joke of it... get some wild pink shoes or add a crazy flowery something down the side... if he's gonna take a ribbing anyway.... make the most of it.... lol....go Andy!!

I was just thinking what BumbleVee said, just go for it...add some sequins or rhinestones down the seams!

If it is any help the Dylon white stuff thing they sell in the super market really really works. I now have very white kids school t-shirts. They were a nice shado of pink and sludge gry before had. Add it to washing maching then BINGO!!

Should re read and not type so fast!! Sorry about all the spelling mistakes.

At least you manage to dye the laundry in pastels (instead of dingy gray); it must be the artist in you!

So cricket gets a bit "sweary," eh?

I suggest you offer to do the team wash and throw a red sock in. Then they'll all be the same.

Maybe the other team will think it's something wrong with their vision....

As a veteran involuntary clothes dyer, I sympathise! I agree with Poppy Cottage though, that Dylon stuff works wonders.

I am glad to hear that we are not the only household to have washing problems!
Penny.
x

Here in the U.S. the Rit Dye Company makes a product called Rit Color Remover. I wonder if it would do the trick on Andy's cricket whites.

Hello PG, and thank you for contributing to my cricket education, the backstage part.

Think that Andy is tall and a good player, and his ... do you call them teams, are delighted that he is one of theirs.

Surely, others on that field (is field the correct term) might just have tinted whites. Makes it so much more interested for the assembled fans.

I really do love your cricket reports.

Thanks for your comment re the Miss R books. Are there still any village schools still around? Probably not.

There are some harsh chemicals that would work. I forget what the product is called, but it has a pink lid to the tub and that may well help (being an expert at ruining whites, it's saved me on occassion!).

I love the cactus story :)

My mom once tinted my six brothers' white Sunday shirts pink. I still see them on the line, out there in the snow. It was a catastrophe back then.

Ha ha ha...I do this kind of thing all the time, never mind eh!
Have changed blogs, MRS is no more, new one Hand and I, have linked you there, go take a little look please dear PG
http://swimperis.blogspot.com

Here in Canada we have a few products that will help. Perhaps you have the same..
1)a combo of washing soda and borax. soak in hot water for a few hours then wash
2)Oxyclean laundry additive. Use soap and oxy powder and let it stand after a bit of agitation in the washer-for a few hours. then finish washing.
3)CLR(which is bathroom lime and rust cleaner for porcelain stains) mixed 50/50 with water. Wash the same way as the others above after soaking.
4)At nursing Uniform shops there is a special whites wash that will make the whites white.
5)RIT fabric dye has a colour remover packet too. That will also do it.

Do not mix any other products other than soap with the products I named as you do not want to cause a weird reaction.