A tale of two Monkeys 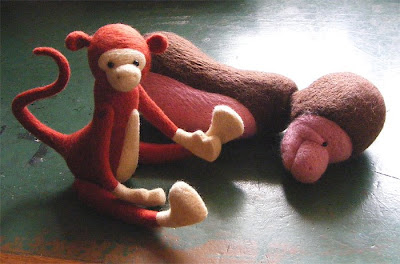 "I met a traveller from an antique land
Who said: Two vast and trunkless legs of stone
Stand in the desert.
Near them, on the sand,
Half sunk, a shattered visage lies, whose frown,
And wrinkled lip, and sneer of cold command,
Tell that its sculptor well those passions read,
Which yet survive, stamped on these lifeless things,
The hand that mocked them, and the heart that fed,
And on the pedestal these words appear:
"My name is Ozymandias, King of Kings:
Look upon my works, ye Mighty, and despair!"
Nothing beside remains.
Round the decay Of that colossal wreck, boundless and bare
The lone and level sands stretch far away."
Percy Bysshe Shelley
Last April I was asked by Stephanie to make her a needle felt creature, and out of all the sketches I produced, she picked the monkey on the right, a kind of Steiff style model. So far so good. I had all kinds of wild plans for this chap - he would have a music box inside him, a ruff, a waistcoat, a fez...he would be the most elaborate toy monkey in the history of toy monkey-dom. 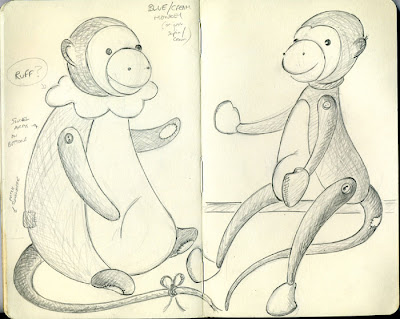 Little did I know what folly I was about to commit. I made the head - which was almost as large as one of my normal toys. Then I lost interest. That was a bit of a shock, as I tend to get obsessed with everything I make and work all hours until it is finished. Months later I made the effort and got the body together. It was about the size of a large aubergine. By now it was beginning to dawn on me that this was really not right. I was beginning to hate it. I stuffed it deep inside my big sack of wool supplies where its grinning face would cease to reproach me. The knife twisted when Andy remarked that it was 'the most unloved toy ever'. At last, just before Christmas, I had a stroke of common sense and realised that I was never going to finish that particular monkey, or if I did, I would take no pleasure in it. The darned thing was simply too big and I loathed the colour scheme. So I started again, the day after Boxing Day. (I was bored witless anyway, as I am not very good at doing nothing). Almost at once, it felt 'right'. The magic was there; it was coming alive under my fingers. 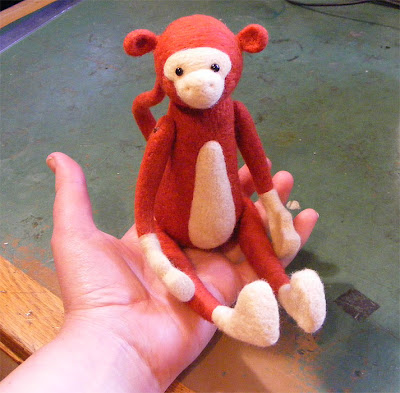 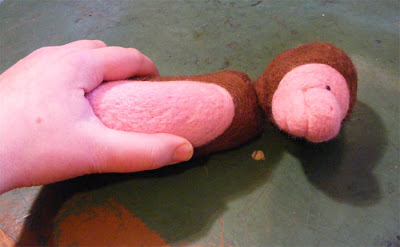 It was a hard lesson learned, for I have been having huge guilt pangs at dragging this project out, even though my lovely client has been terribly sweet about it. But in the end I finished ''Jocko' in a mere five days. He is thread jointed, and his limbs and head swivel pleasingly. 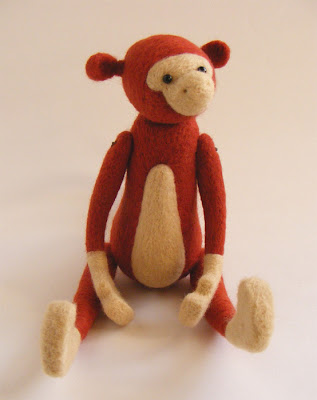 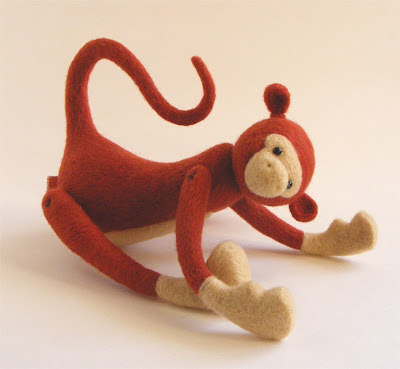 Unwittingly, I formed his tail into an 'S', for Stephanie. Nowadays I make my tails without central support (eg, wire or pipe cleaners) which takes a lot of patient and careful stabbing. This one took roughly 4 hours working time. I did make him a little fez, but Andy suggested he didn't need one...and nor he did. Or a music box, or a ruff, or a waistcoat. He just seems right au naturel. 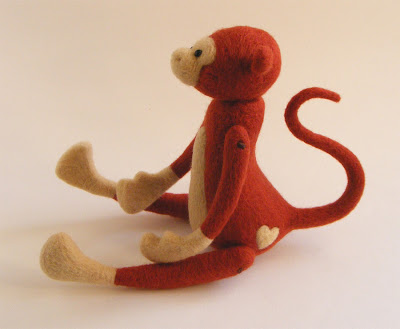 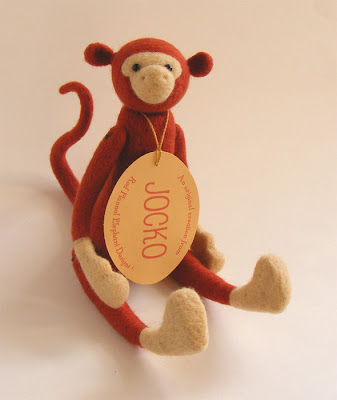 I can start the New Year with a sense of relief, and Jocko is off to warmer climes. He's going to miss British TV though. 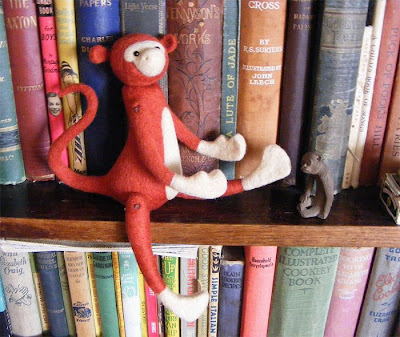 He is perfect! Such lithe and lovely energy he has, and, I confess, I don't particularly like monkeys. I know what you mean about starting over, I had to do that recently.....

I love monkeys... I remember when I was kid I wished I had a monkey and a donkey.. not much hope of that but I was only a kid .. I love the character you have stitched into this little fellow..

You boggle me with your imagination... Thank you...

he puts a smile on my face!
The one with no legs or arms yet in the first pic reminds me of Curious George!

He is just spectacular! I'm working on a storyboard for the Curious George TV series this morning and your wonderful tale and pictures give me extra inspiration.

You constantly astound me - I seriously don't know how you do it - it is like a magic santa's workshop - perfect toy after perfect toy .... I just can't wait to see what else is produced in 2009 ....

The shapes in him are perfect and his little face full of character too! He is brilliant, I love the heart on his bum!

I love the way you make your characters and the quality of the needle felt is wonderful. Thanks for the glimpse of the bookshelf. I love nosying through peoples book collections and yours looks a fantastic one.
Charlotte

Aaaw he's so gorgeous. I know what you mean about the magic. When it's right, they almost make themselves.

Gretel, you did it again, you're awesome! And he's proud to be him, I can see it in his face.
What a collection of old books!

Happy ,Happy, Lucky Me! He is BEAUTIFUL! And you are damn good, Chica! Damn good. Many thanks! (I'm just all smiles- can't wait to show Fred!!)

Fantastic monkey. No fez, but so much soul and a heart, and that tail!

He is perfect in every way. I can see now why you were having such a block with the first one... because he wasn't Jocko!

He is indeed the most fabulous toy monkey in monkeydom! I am completely in love with his ears!! I especially love how big he looks sitting next to his little friend on the bookshelf!! Great job, as usual!

Happy New Year to You!!!

Your sparky little monkey reminds me of the Curious George books. Do you know them?

We call our youngest daughter "Monkerella" or "Monk," for short. Monkeys are enormously appealing creatures, and I'm so glad that you got this one "just right." Sometimes it is best to start from scratch again.

Jocko is gorgeous, full of character - it's great when a project 'flows' with a life of its' own. Can't help feeling very sorry for the poor half-finished monkey - does he not stand any chance at all??

As usual, another masterpiece. I love the heart on Jocko's backside. I'm sure that the love you put inside your creations is what makes them come alive.
Have an interesting 2009.

Happy New Year to you both.
It still amazes me how a ball of wool can turn into a creature, I'm sure if I did it, it would still look like a ball of wool!! lol!!

I absolutely love him! I need to come take needle felting classes from you, your work is so clean and crisp, its amazing! And your characters are so much fun! I wish I was that creative.

Oh my goodness, Jocko is adorable! Perfect. I wonder, is it possible to recycle rejected, splodgy, not so perfect monkeys? What will become of t'other one? If he's going to end up in a charity shop in Witney I'll be straight on down the Fosse... I was thinking about making such an excursion soon anyway. Looking forward to following your blog through the year and send wishes for bestest blessings for you and your bloke.

I am no fan of monkeys but your little fella is so stunning I forgot all about my dislike.

Jocko is a delight indeed.
When our son was small he used to call monkeys "mummins" his favorite creature to this day.( he is 30!)
when we lived in morocco we saw monkeys everyday in the big square but they made me sad.
I think they should be outside running around.
ps I love the Curios George books

He's quite, quite beautiful. You're so clever!

Ozymandias..I can rememebr all that poem off by heart except for one line...the one about lifeless things..I never include it in my rendition! Your things are not lifeless, nor are they colossal wrecks. But I get your point.

Jocko is a lovely monkey, and the Ozymandias quote coupled with the picture made me giggle.

(And thank you for the goodies in my Christmas stocking! OM NOM NOM.)

That is one amazing monkey... I can't believe your incredible attention to detail on these little creatures. You're so good at this. Wonderful little Jocko.

How sweet! He looks as if he could climb right up that bookcase! You are so talented. But to deprive him of British TV is a bit cruel....

Happy New Year Gretel! Aw the monkey is utterly charming, and it is good to see how you worked yourself out of the mess of Frankenmunkii - who has his own charm, but only one that appeals to warped tastes like mine maybe ;-)

I am glad I'm not the only one who fails....I have more unfinished pieces than finished.....but I always think it is the right thing to do ( to abandon and start over)and your finished monkey is a real cutie

Oh my goodness,
I could fall in love
even with a monkey,
who would have thought?

Gretel,
I am so happy for you, you created an exquisite work of art.
Congratulations! :-)

happy New Year Gretel! Yet another fabulous plushie! Love it!

My favorite image is of Jocko before the bookcase because he looks like he climbed out of a storybook. Even his tail has character.

Your work and your dedication inspire me. Thank you for posting photos of your beautiful creations. It takes great courage and committment to be a full-time artist. I admire you.
God bless you and your work.

Castle in the Air said...

Such a sweet creation story!
I'm amazed at the precision. I felt a lot and am ever astonished by the diversity of the medium.
Your sketchbook is particularly inspiring. Each character is a story unto itself!
Best,
Karima

Perfect! What a sweet birthing process!! I love it. I love the feel and the energy of this creation...I hope there are more..?
Linda

A HAPPY NEW YEAR TO YOU!
How lovely to be able to visit here again and find what I think might be the best animal yet.. no.. actually I can't choose a favourite.. but he is a fine fellow indeed. It is nice to see the poor chap that never made it too... funny how some works just don't seem right.
What an amazing non-wiry wiry tail too!!
Sending love from the orchard ... and looking forward to visiting you at some point this year :)
X R

These monkeys are adorable. By the way, THANK YOU SO MUCH for making The Oreo Gallery your site of the week. That's just wonderful. -gordon

absolutely adorable with the sweetest face - quite astonishing how you make these toys come alive!

Your sweet monkeys somehow made it into my dreams. I was worried sick because I could not find a warm winter coat for them! Silly haberdashers, not a singly monkey outdoor outfit, what outrage! ;-)

May they always live in warmer climes and a cosy place by the fire for you! Hugs, M.

I love the way you have given Jocko movable joints.
Happy new year to you and Andy!
Penny.
x

Ooops! I thought I'd already commented about how lovely the revised version turned out (but it must've just been in my heade ;-) ). Jocko is lovely, so full of character!

A very belated happy new year to you Gretel - hope it's a good one all round.