A weight has lifted... 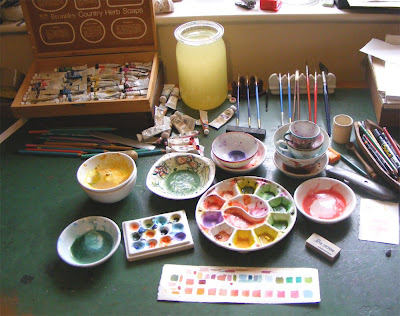 ...and I am free!! The last fiddly-widdly bit has been filled in, the final sheet of artwork removed from the board. My table is a ruined battle ground of scattered palettes, ravaged tubes of paint and steaming brushes. An air of finality hangs about the studio: it is done. (And it isn't coming out until February, so even I won't know what it really looks like till then). 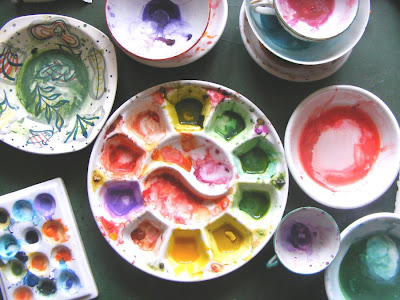 Time to say thank you to kind people who gave me those award thingys, namely Kim of Oakmoon, Hen of Bee-leaf, Elizabeth of the House in Marrakesh, Pamela and lovely Edward for being so kind about my work and Dana of Calico Cat Press. Phew...I am far too lazy to follow award rules, so instead here are seven blogs which have been added to my ever growing list of favourites. (206 and counting).


Under the Licorice Tree one of the most inventive, original needle felters I have seen (and a set of vintage toy clockwork monkeys to die for).

So Much Pileup an ever growing collection of gorgeous graphic images and illustration from the 1960's to 80's.

The Hogscald Holler - He plays bluegrass, She hooks rugs - they both live overlooking the wonderfully named Beaver Lake, and to an untravelled Brit such as myself, it is marvellously American.

I lied, just one more. Dog Daisy Chains. A professional embroiderer from Lancashire - I have run out of flattering words - sublime? Yes.

This has been, for reasons I can't go into, the most intense, complicated job I have worked on. But it is my first UK book, and for that I love it. Though I think people who kindly admire my subdued artworks are going to be disappointed.

To celebrate, New Goosie and I flumped out on the sofa with wine and Mr Kiplings Strawberry and Cream fondant fancies, which I can report are utterly delicious. (Limited edition, so get them while they're in season). Goosie was thrilled to hear that her sister, Lanky Lil had been featured on Snap Dragon's Garden, having been taken in by Jane, who said such nice things about her that I fear her little head may have swollen. 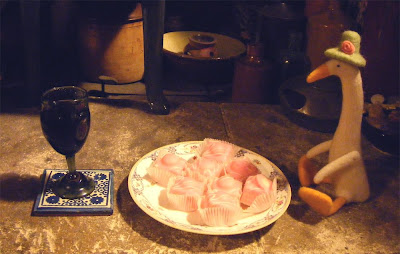 What next? Sobbing with relief I can pick up my neglected felting needle - a backlog of orders to clear, a set of samples for Something, new designs to make up, dusting off my sewing machine, Christmas cards to sort out, oh and I almost forgot, The Green Gallery, in Stirling, Scotland has asked me to contribute to a Christmas show - I am quietly excited to be sending six toys and four paintings. But before any of that, I am going to get myself outside of a bacon sandwich and take my camera for a walk across the fields - it's been a long time, and the Sun is finally coming out. 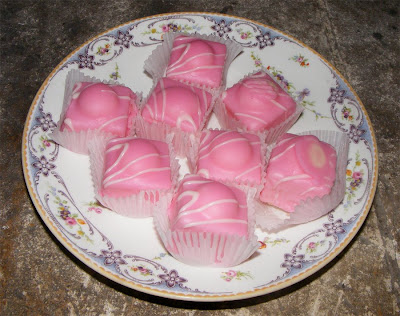 I'm so glad you've finished the book, Gretel, it must be a fabulous feeling, and your post is one of relieved excitement, if that makes sense :)

Please do keep us posted as to when it goes on sale, because I soooo would like to buy a copy. I have one of Jackie's books from 'The ginger Darlings' and it's very precious, because I sort of know her :)

Congratulations on finishing your art work ~ you must be so relieved.
I greatly admire your tenacity and I look forward to reading more of your wonderful posts.

Fantastic PG, that It is Done! And that you can get out doors, relax a bit, and just contemplate what beautiful work you have created.

I also want to be able to have a copy of that book when it is available.

Thank you also for the introduction to even more very interesting blogs! Reading your postings helps me to keep a little of my artistic side alive. It's such a treat to see what folks are up to all over the world.

Hooray! 'Tis done! The relief must be great, and just think...you have a lovely cheque to look forward to!

Enjoy...relax and catch up with your felting.

Congratulations on completion - I'll bet you'll miss it...but not for long. Have fun with all your other projects!
(I shouldn't be on the computer, for me it's 4 paintings down, 96 to go....sigh!!)

Ahhhhh, I can feel your relief ! Now on to some fun stuff :)

You are very kind thank you. (And I am very vain, as I discovered this with a google alert for my name) and your blgo is sublime. I will be back when chaos in the kitchen has been tamed.

Congratulations on finishing! I can't wait to see the final product!

Congratulations! I look forward to seeing your photos.

Hurrah!
So glad you've finished, I'm sure it's wonderful.
Looking forward to seeing more of your lovely work but no rush, finish your wine and cake first!

Welcome back fondant fancier and demolisher! Love your phrase about being on the outside of a bacon buttie too (even though I'm a veggie). Bet it felt great to get mud on yer wellies again. I'm glad for you. X

Enjoy your celebration (love the photo)!

Lovely to hear that news! And a great pic of the desk... you must feel so free and unguilty doing nice things now.
I really can't wait to see the book...
And bravo for the exhibition!
Does that mean you'll be coming up here too - along with your works? Fancy a cuppa if you do? :)
WELL DONE!
X R

Lots of exciting news. So glad to read all of the good things coming your way.

Your relief is just palpable. I'm very happy for you. And congrats also on the exhibition - sounds ideal for your work. Can't wait to see what you pull together for it.

Enjoy downtime and your long walks in the wild for me... (send pictures).

Fantastic! and well done. Book will be lovely. Really love New Goosie's HAT, oh yes, very nice. Hope you can capture some sun, here it is rare for the UK this summer.

Hooray! You are done! Congratulations you.

Oh, and apropos of nothing in particular other than your mentioning a bacon sandwich, a rather silly sketch on the subject of bacon: http://www.youtube.com/watch?v=-aJ6bTnco00

I want to say congratulations...but I want to say 'fan-freakin-tastic' more! February seems like such a long time to wait! Can't wait to see the finished results. Enjoy a lovely little rest - Jen

Glad to hear it has all gone well, and that you can finally emerge from indoors! (I think the sun will come out now, to celebrate with you!)

Congratulations on finishing the artwork for your book. I look forward to seeing it. Karen

Congratulations! I know you much be feeling such happy relief. Your strawberry feast was well deserved and Edward and I hope you enjoy your sunshiney walks! All the best your way!

Me again :)
Yes you did send me that jester and wheeled cart card - it has been on my wall ever since!
And here's some more wheely info..
the metal car thingy is by NZ sculptor Desmond Ford - link here.
And the wheeled zebra is a scan from the most wonderful folk art book ever: here ...
Happy days off to you and a hug x

What a way to celebrate ;-) with pink Mr. Kipling cakes!!! Wasn't the line something like 'Mr Kipling makes exceedingly good cakes!' .... fondant fancies ... my my x

Cannot wait to see the book Gretel! I hope you get some decent weather now to enjoy your newly-regained freedom.

Oh, I am so happy for you. What a relief it must be. Enjoy your walks and I hope that you have some gentle, quietly melting into moments of comfort, quiet and, yes..JOY for such a work well done. Not being an artist, all I can imagine that it must be akin to conception, giving birth, nurturing and caring and then sending your opus out into the world with a bit of fear, release, joy and sadness...all flummoxed up at once.
You certainly have my admiration.
(hope I am not being verbose twice..this didn't seem to load.)

Well done! can't wait to see it in print!

Hello there, I have just found your blog via your comment on Gigi bird. I also make toys and was interested in your copyright comments. So pleased to have found your gorgeous blog. Will be back to discover more later x

Well done you, I can't wait to see it!

The colour swatch looks nice. I hope you keep them all in a little colour sample book?

Good luck with the show.

Well done Gretel! It must feel great to emerge back into the light again. Grrrrr!:¬)

Well done! :)
I suppose it must feel like you're looking at a battleground, but to me it looks as much as an array of treats as does that plate of cakes!x

thank you for your wonderful blog and the links to others. i have been throughly entertained and have passed some sites along to my needle crafty niece. "under the licorice tree" is such a fav for the critters created....
deb

Thank you so much... you are beyond kind!!! Your work is truly inspiring and amazing!!! Congratulations to you!!!

I only came across this now after all this time.. working for myself fills the time too much sometimes.