I received an email a while back from someone asking how I get my watercolour effects. Specifically, the granulation. Difficult one, as I have been mucking about with paint ever since my old dad got me my first basic Reeves box, when I was about four. So it's kind of second nature, precocious though that may sound. I break the 'rules' about mixing different kinds of paint (I do, frequently - gouache and watercolour) and I sometimes use old, and often dried up paints, frequently getting bits of dust in the wash. But somehow granulation always occurs in my washes, even though I hadn't heard of the term until a few years ago when someone told me I was doing it. 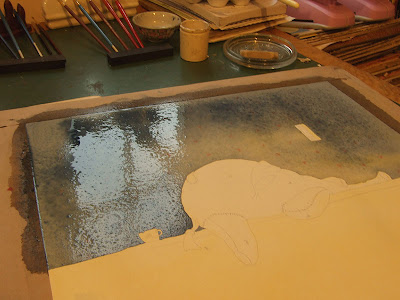 The main thing is, I watch my washes hawkishly, like a chef minds his (or her) sauce. This painting already has already two flimsy and dried washes. They go down loose, like liquid tissue paper... 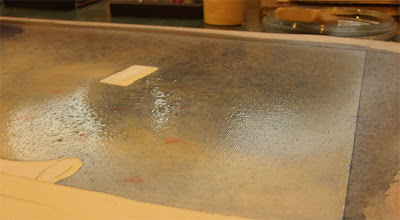 ...and when it is finished to my satisfaction, I get it levelled (or I might prop it a little, to push the darker paint into the shadow area) and watch it dry. It has to dry evenly, and naturally. No hairdryer. Ever. The upper photo shows the evaporating, dulling wash in the bottom right corner. This is what I watch, to check it is not drying too hard into the wash, which might create a tide mark. If it is going too fast, I might tip the board, or put a bit more water in, to coax and blend it into the existing one. It's a matter of squinting sideways and judgement. Then acting quickly and confidently if action needs taking. 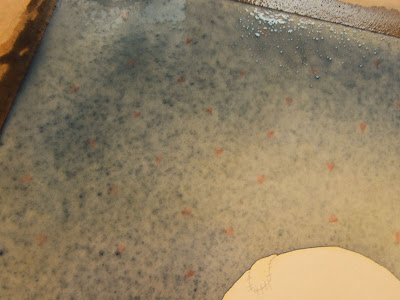 The granulation; basically a speckledy finish. And below, just to the side of the window, the pigment in danger of drying into a slight trough. If it is left it will create a darker line - so I tilt the board gently this way and that, to even it out. 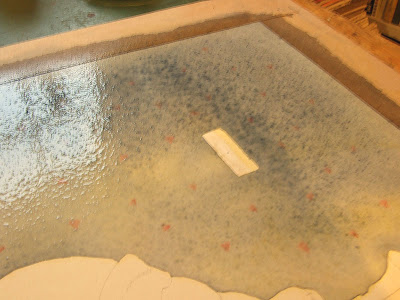 After about 40 minutes of babysitting it, I popped down to make some tea, and returned to a minor hiccup - the dark area had dried unevenly, resulting in a nasty little blotch. 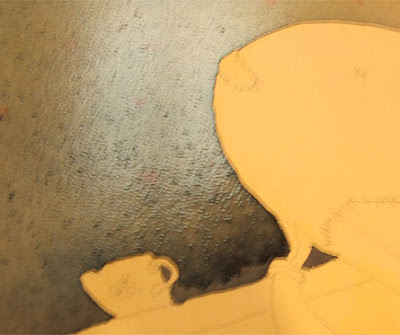 Somewhat late for surgery, but some careful tweaking just about sorted it. Luckily it's in the shadow area where I will be putting in some pencil work, but I don't loose too much sleep over little mishaps - it's all part of the process. You can't teach this and the most disappointing answer I give - in reply to most things, not just painting - is it takes time, trial and error, which results in experience. Making mistakes and waiting are sometimes the best way to learn. Putting the time in can seem boring - but I don't have a magic, instant solution, and it works for me. 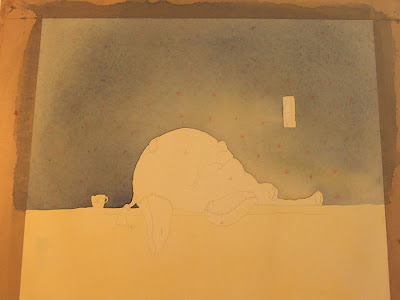 Thank you for showing this process, it is very helpful. I am afraid to try washes with watercolor because it is so unpredictable but this makes me want to give it a try. =) Hmm.. now I have to go find some tape and a board...

Hi Gretel, Thanks for sharing your process and those fantastic close-up photos! I love the muted colours you use, and envy your ability to know which colour does what. I know this comes with practice and experience - I just need to buckle down! Thanks for visiting earlier today. :O)

This is lovely to watch - I can almost taste the tea and sense the apprehension as the perfect drying point gets nearer! Thanks for sharing this, G!

Hope you are feeling alot better after your poorliness, sweetie, and sorry for being so crap at posting lately....

There is something magical about a wash, waiting to see how it will turn out - I love it! What paper are you using - I like the creamy shade.

Thank you artistic ladies! Jess, I used to be not-so-good with watercolour, one day I'll post some of my earlier efforts!

Parrish, watercolour is like an excitable dog, if you learn to make it walk to heel it will do anything for you, otherwise it's all over the park! Give it another go, go on!

Viggy, wondered where you had gotten to!

Caroline, it's just Arches HP (140lb I think) but I always start with a (very) thin yellow wash on all my paintings, hence the creamy effect.

This seems such a wondrous process, and, besides the talent, it takes so much knowledge and patience. Thank you for sharing this. I am awed.

Yes the effects are magical. you must be very patient.
but worth all the effort.
Re hot choc at the Majorell Gradens - I think we were just lucky - some Moroccans can make you wait FOR EVER!!!

Thanks for sharing the painting process G, its really interesting to see how others work.
Just had a look at your Marrakesh link, such an interesting place, one funny memory I have is a whole market stall of second hand false teeth!
P.x

Thanks for showing this aspect of your process, Gretel. It looks like magic. Your work is so subtle and elegant. I've been inspired by you and Lisbeth Zweger to try a more delicate approach on a painting. Have you using a masking fluid here to reserve some areas? Also I just recently picked up some Aqqua pasto, a watercolour retarder, have you tried this? Any thoughts?

Ooh no, never heard of it - (goes off to Google) oh, I see, it thickens paint...no, I like my paint thin! I rarely use masking fluid, I put a clean sheet of water down onto the area I'm about to wash into, and then work very quickly. If it is a very big wash (A2) I will add ox gall, which helps with the flow, but normally it's just speed, paint and water.

It's an extender, and I've found that it's more effective for gouache inmy own work, if I'm doing clouds with lots of blending, say. Though I rarely use it, I was more curious if it was in your arsenal of tools. I have never used Ox Gall and don't know much about it, it's a wetting agent and it reduces water tension? What does that mean in practical terms? Maybe I should buy some and just try it out.

Well, it just seems to stop the wash drying out so quickly, and makes it less likely to make tidelines - I don't know precisely how it works; it's the only 'extra' I use, apart from once in a blue moon I might use gum arabic to bumph up a little area of colour. I find it useful when I have a very big expanse of flat wash to do, which will not have much added to it, but my work tends to be emptier of content than yours (probably because I am lazy...), so you probably wouldn't have a use for it. :)

Happy new year!
I'm taking a break from "nesting" to say "bonjour".
I miss working in watercolour, there's something magical about it and you have it nailed, IMHO :0)

I have always wanted to paint watercolours...I once had a glorious hour long lesson over looking the habour on the Isles of Scilly (a birthday present from my aunt). Now I have time on my hands I am going to have another bash.
Thanks for showing us this, any more help would be most welcome :-)
Take care,
Alison x

Hello and thank you for being so generous with the watercolor lessons.

I agree that the photos are terrific, and really do "show" what you are "telling."

Right now, I have an hour to get ready and to travel to work, but what I would like to do right now is get out the watercolors, brushes and paper! Tomorrow's a day off, so I hope to hold on to this inspiration.

I love watercolor and all the work up on your blog!!! cheers!

I'm sure I left a comment before - am I going doolally, Gretel?!! Beautiful work, fab to see the different stages :)

Whew!
I'm glad I am sitting down!
I feel like I have just witnessed a Magic trick!
Just Amazing! And I love that you don't follow the "rules", me too!
Sandra Evertson

Thanks so much Gretel for letting us in on a few trade secrets on how you do your amazing work. This is such an informative and inspiring post. Of course, we will all rush out and try it and discover how very difficult it is to get just the right result. But ... with time ... and trial and error. Hope you are well!

I always admire people greatly who can make paper, paint and brush into a picture!
I love you cone people too!

And there I was thinking it was all so simple............There's an art to this artistic thingy !
I'm well impressed PG

I put up a process post, so now we can compare notes.

How very nice of you to share your valuable trade secrets... This is fascinating. You are a master of watercolour I think and Eric is right to be taking inspiration from you and Lizbeth Zwerger :)
I am very unorthodox with my use of watercolour and sort of, um, scrub at tidelines with a wet brush and more layers of paint in slightly different shades! I think I am a much more haphazard worker than you and always have admired your discipline. I am even too impatient to wait for the paint to dry before painting alongside...
Anyway, bravo for this peep into your paint technicalities x

this is wonderful, thank you for sharing! I am terrible at watercolour for that very reason, I don't have the patience to work at it and tend to it the way it requires and use gouache when I have to. Watercolour takes such skill, all credit to you!

Very interesting. I once went on a water colour workshop, and the lady had us hairdrying our peices. It was good fun, and we used toothbrushes, flicking the bristles with our fingers to create snow on the picture. Mine had so much snow, you could barely see anything else ! Well it was a winter scene after all ! ~ love Julia x

Somestimes I need a little longer to understand why something fascinates me. Take your post here, I was really impressed by the way you washed your painting, but didn't realize until I read about "sepia feeling" over at Sarah*s "Muddy Red Shoe". Only then did I remember where the connection lies hidden: In processing silver-gelatine prints, which of course involves lots of washing/s, and the following sepia toning, the outcome of which is greatly influenced by the timing and handling of the sepia wash. I hve done my share of washings there. ;-)
And now you make me long for my old film camera, take a b/w film, and go shooting. Problem is, I have no darkroom here in Vienna. Home sickness setting in.