If, as you read this, you feel a faint breeze ruffle your hair, do not worry. It is merely I, sighing deeply from the depths of cyberspace. as we reach the end of the week still in a state of leaky loo and (in Andy's case) some kind of lingering food poisoning. Our Landlord is actually a lovely chap and having been round to see the state the floor is in - sodden, soft and rotting - decreed that it is to be replaced. Reasons to be cheerful.
So, poor Andy is in official sick mode, ensconced on the sofa with Lucozade and daytime TV. I seem to have recovered now; my immune system is Amazonian, and I feel vaguely normal again. So it fell to me to pick the first strawberries of the year (I gave most of them to the invalid in a moment of supreme self sacrifice)... 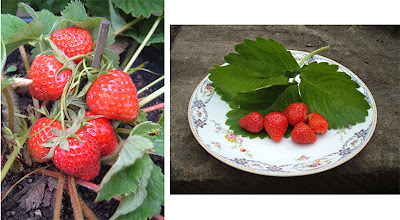 ...and keep up the nightly slug patrols. I was joined last night by a pair of large frogs, who are doing sterling work devouring the hordes of greedy, veg guzzling gastropods, and this beauty, flolloping around my Marmande tomato bed. 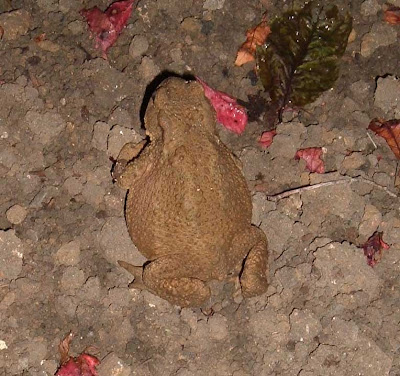 I am rather superstitious where numbers are concerned, so as three people have asked me to do the ubiquitous seven/eight things about me, and as it has been such a dreary week, here they are. You have Sue of Picture Dreams, Sweetpea, and Un Peu Loufoque to thank for this.

1) I tend to read magazines backwards - that's where the interesting stuff is.

2) I have four modest tattoos on my left and right forearms. This was not considered ladylike when I had them done twenty odd years ago and still isn't. (Not that I have ever been concerned with that, then or now).

3) I dislike wearing socks, especially with footware, due to a distressing childhood experience. I will avoid wearing them even when the weather is freezing.

4) I was orphaned when I was twelve.

5) I vowed to become an artist when my father died, (for him) and my life since then has been single mindedly dedicated to that end. If I'd had a normal childhood and followed my own inclinations, I would probably have become a naturalist of some kind. (This has only been a recent bit of self discovery and I'm still dealing with it).

6) I have always lived in rented accommodation, and never lived anywhere more than five years, despite having a deep and lifelong need to have roots.

7) My secret desire, if I ever had enough money, would be to have singing lessons.

I think everyone in the Universe has done this tag by now, so I fling it open to the winds.
Posted by Gretel at 13:48

Email ThisBlogThis!Share to TwitterShare to FacebookShare to Pinterest
Labels: about me, natural predators, strawberries, toad

Sorry to hear about the food poisoning- is there any worse feeling than that? Ugh! Well- I wish him a speedy recovery.

Those are very interesting things, I had a sense you were a really strong person from this blog, but has no idea how strong! Damn! I wish we lived closer, you would be so cool to hang with.

I've run into the tatoo thing too- I have one on my calf...I wish I had put it somewhere I could keep more private, but at the time I got it I was 18 (21 years ago) and part of getting it was to satisfy some teenage rebelleon thing.

Warm wishes from way over here!

cor I thought it was only me who hated socks, actually I hate shoes too but int his climate social and metriologial they are sort of ompulsory!

So sorry to read Andy is still feeling poorly. That is not fun!
Glad to know the landlord plans to repair the loo and floor situation, that also is not fun!

Your list of facts is VERY interesting. I thought I was the only one who read magazines backwards (actually my Mom did too). I don't wear socks either unless I am unbearably cold (which is rare). I don't like my feet hemmed in.I'm not that fond of wearing shoes either.
Orphaned at 12? I cannot imagine what that must have been like. It made me a wee bit sad to read that one.
I don't know why but I've always had the sense your life and interests and art experiences and love of wandering the woods would make a good book. I'd still love to see a photo of you!!
Anyway, hoping for a Andy to feel better and sending you hugs!
XOXO

I have a secret desire for singing lessons, if I had enough money too! The birds have eaten my strawberries but I thought they deserved them they are so busy at the moment.

Thanks for visiting my blog!! Just wanted to point out I am in the UK just a few miles down the road from you in Wiltshire!!!!

LOL!! I am really thrilled now! It means I have obviously done a good job in my garden. Thank you very much :o)

Can't grow edibles in my garden as I haven't the heart to dispose of the slugs and snails, guess that is the naturalist in me coming out. Don't wear socks either.

I'd love to take singing lessons too; next time we're out walking, perhaps we can serenade the wildlife??! Anja was ooh-ing and aah-ing at your toad photo - she'd like nothing better than to come foraging in your garden for some hopping beasties!!

Sorry to hear Andy is still feeling fragile. Hope he feels better soon and that you get at least some of your strawberries!

What an amazing looking toad - I've never seen anything like it here in the U.S. Maybe he would like some strawberries.

I'd like singing lessons, I have an awful voice !

I really enjoy reading your blog and looking at all of the wonderful art that you create. Love to hear about your walks, ramblings and your enjoyment of nature.
Looking at the picture of the toad reminded me of a story I heard on Public Radio about a dog who literally sucked on toads. (I know, it's a disgusting thought) but toads, at least some toads, have something in their bodies that is like a drug or hallucinogenic when dogs lick them. The dog in the story was truly addicted. My brother, who lives in Hawaii, has to keep a watch out for his dog as she will go after toads and is definitely in a drug induced state if he doesn't catch her in time. (I'm sure you wanted to hear this yucky fact!)
Thanks again for the pleasure your site brings to my day.

I thought I knew everything about toads, but ellen's fascinating comment set that misconception straight...not that you'd find me out licking toads, although I've kissed a few frogs in my lifetime, searching for that prince.
Hope this finds both you and Andy back in top form with a new floor overhead (or below, depending on what room you're standing in).
Thank you for sharing some very personal interesting things with us. And...just to add my name to the rest of the sock-haters, I'd rather go barefoot any time of the day.

How interesting your seven things are, as well as brave.

I always lived in rented houses, and moved every three years until my last relationship (rented house, but lived there for eight years), and now, I guess. I *love* not renting.

For years we had our own toad-in-residence while we lived in Washington, DC. He or she used to come in the late fall, and take refuge in one of my large earthen flower pots beside the entrance door (s/he must have jumped more than a foot to get in!). The first time I discovered my lovely tennant, I actually touched him with my hand, one late evening. Imagine my scream. S/he wasn't discouraged.
I loved my toad dearly, I do not know how long they live, if it was the same who returned every year, or its offspring, but return they did. And every now and then I observed young ones around the front yard.
I dearly miss my friend, I hope he found a safe place after we moved to Vienna. I like to think so.

Eeew...Ellen...I must restrain myself from licking our toad! (I wonder what it feels like to have drug experiences from them? Maybe not...)

Merisi, toads are lovely, arent they? I don't mind picking them up at all, they are so soft and leathery. Not sure how much the toad likes it though!

I will not be wearing socks until October from now on. This is a great feeling...nor shoes most of the time. I normally stick to clogs anyway.
Apologies...I do not like toads, frogs, things with more than four legs. I do like your creations.