Life, but not as we know it

So, I'm waiting for feedback on an illustration job which has come in. I'm letting the first wash dry on my first Illustration Friday offering. And I thought I'd be home maker supreme and make a chorizo and tomato soup, using some cherry tomatoes I bottled up three (or was it four? Five?) years ago. Reaching in to the cobwebby depths of the dresser cupboard my hands encountered not one but two jars. Now, I do have a tendency to hoard, but why for the life of me I have hung on to a large jar of blackberries for four years I do not know. Ask my subconscious. It's not as if they don't grow every year. 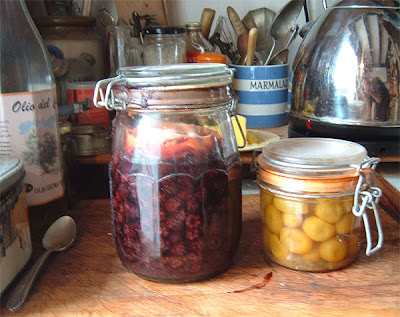 The lid had actually lifted off slightly, and the sides were streaked with a dark fermenting liquid oozing from under the seal. Worse, there was a strange, furry cap growing inside. Cautious sniffing revealed a sweet vinegar smell and it did cross my mind to save a little mould culture and start my own balsamic vinegar plant. But after our recent adventures in the Land of Food Poisoning I decided not. 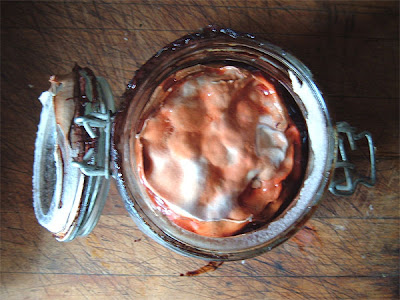 Such a pretty auburn red - more like Brown Madder really. 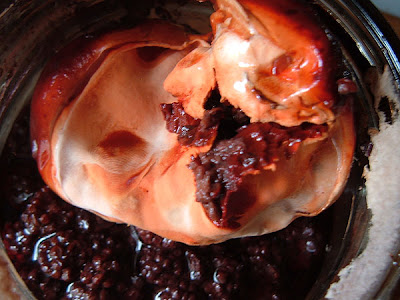 On to the tomatoes. Golden Sunrise I think, once upon a time. No mould there; they looked alright. And even smelled acceptable. Maybe I had broken a new record for longevity in bottling. 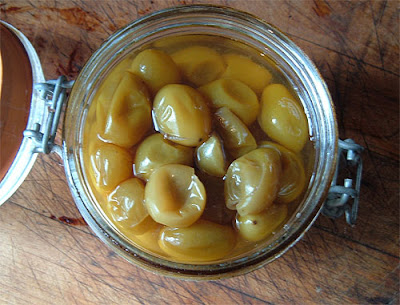 But no. A finger tip taste resulted in my spitting very uncouthly in the sink and with much ceremony, the contents were taken to their final resting place in the compost heap. We will still have chorizo and tomato soup, but with tinned tomatoes. Shop bought.
Posted by Gretel at 09:49

What a pity to loose what ones was such delicious fruit of ones labour!
I must admit, I never even tried preserving tomatoes. The organic bottles or tinned ones taste so good, and are picked at their supreme ripeness, I cannot be tempted (and this feels so good to my lazy inner housekeeper *g*).
I hope your soup turned out well, I would love to have the recipe, if you would be so kind, the name's a temptation in itself, "Chorizo and tomato soup", I am getting hungry! :-)

what once was ... fruit of one's labour: I am sorry, sometimes my brain does get a bit confused by phonetics, from the look of it. :-)

blackberrys - cooked and sieve'd
plus LOADS of sugar (white), pectin + secret ingredients
+ touch of brandy
=
peake speciality blackberry jam, current jar is circa 2002 and is ace

and you just thought I was a type nerd ; )

glad you are better - been sickness and gnashing of teeth here as well, which with a 3 year old and a 6 month old isnt a nice experience at all at all
cheers
Graham Peake

Aw, too bad they weren`t any good still. I`ve always wanted to can things, but don`t have a spot to keep them. Glad you`re all feeling better!

My mum used to bottle stuff...mostly plums if I remember right. Not sure what her secret was. I've never tried it, but I confess to a weakness for the jars!
And also I spy a cornish blue stripey marmalade pot in the background of your first pic. Lust!;-)

This is why I don't bottle things - I just KNOW that it would all go off and then there would be a horrible trip to the compost heap!

Oh my, those blackberries! There's a memorable picture. Maybe you should call the Botox people and tell them you've whipped up a little something special for their celebrity clients. :)

My sister often canned blackberry jam during the summer. One of her half-pints of jam didn't have a perfect seal, or she didn't sterilize the jar or the seal properly or something, because even though the seal seemed perfectly sound there was a lovely crop of blue-green fur growing on the surface in a matter of months.

Canning is always a bit of a crapshoot. I like the book Putting Food By for its exhaustive instructions for preserving all kinds of food. The authors are sticklers for absolute cleanliness and sterilization of everything under the sun, but I imagine they rarely had troubles with "fungus among us."

While I found the mold photos fascinating and liked nothing better than to do bread + mold experiments with my students, I simply couldn't take my eyes off of the MARMALADE Cornish ware that was tucked in behind the lot.
Happy to hear that you are feeling better (you were brave to do the finger tip taste test) and that you now have a proper bathroom that doesn't overflow into the kitchen below (cool photo of missing floor boards, though!).

Hehe! Everyone is covetting the Cornish Ware! I love it! I have a pouring bowl that has a crack all the way round and creaks ominously when you wash it so it is now retired and living on my display shelf :-D
Your blackberries look like the inside of all the mugs I collect up from my room once a month to scrape out!

Before I read your post I was saying to myself what wonderful pictures Gretel always takes!
.....Ah well, there's always next years batch.

I hope you are all out and about and the ceiling above your kitchen is leak proof by now!
Here it's sunny again, and the temperature at 24° at 5pm seem low compared to the mid thirties all week, so I am enjoy puttering around the house without breaking out in a sweat. :-)

I was making faces as I read this...as if somehow I was tasting or smelling what you described.
XOXO
Love and hugs,
Lisa