That's paper cutting to you. What a pleasant break from painting. I drew my first little silhouette people when I was about 17, I'd just bought one of those brush pens and was doodling about with it, and this little person appeared as if by magic. A few twiddles and there was another one. I had found my world. I drew several lines of them on horrid flourescent orange paper and they are somewhere in all my bumph but they must be hiding. When Andy and I were at college he made me this sketchbook - 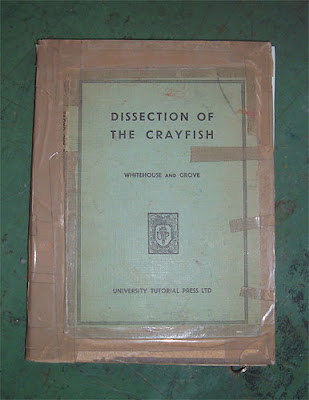 and I filled it with little scenes of my people. I think in those days a lot of them were sheer wishful thinking to be in a tranquil world, just sitting, or sleeping - I still am fixed on beds. 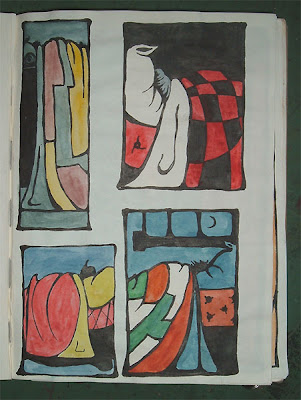 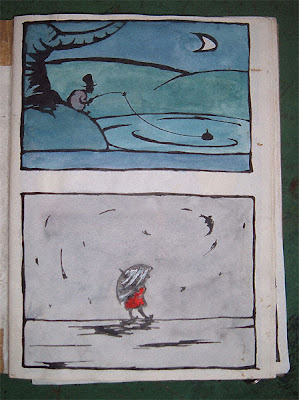 The entire contents of this book can be found here. Back then I was more concerned with having a pretty sketchbook - now I just scribble on the nearest bit of paper and get the idea out asap. I didn't do anything with them apart from the occasional lino cut. There wasn't much of a commercial demand for that kind of thing - and there isn't now. But it's still my favourite way of depicting things; I find it much easier to think in such a graphic way. So here I am again, revisiting my old designs, and pinching my own ideas from 15 years ago. This was inspired from a field trip to Barcelona - 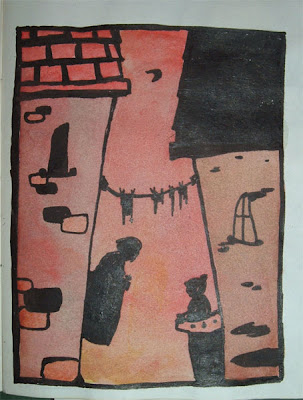 and here it is tweaked a little, as a papercut...mounted on a 5 inch card, and yes, the laundry line was a bit fiddly. 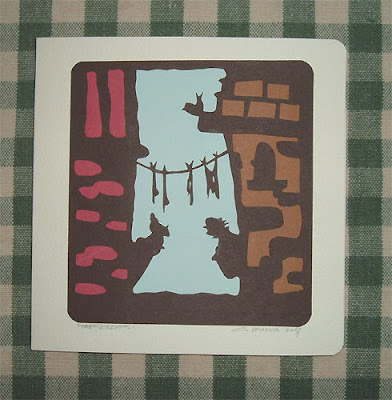 (for sale on Etsy)
It feels a bit odd to be going back an old style, but rather like a comfy pair of slippers you know are going to fit. 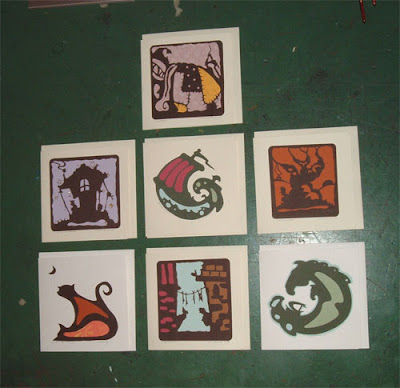 This is a beautiful sketch book, I love it! my favourite is the bottom image on page one.
Penny. x

wonderful work - and lovely to see the progression from the original sketchbook pieces to the more recent work - beautifully done.

Gorgeously graphic! It's making my fingers itch a bit.... *sigh*

I stand in awe!

They are lovely, I love the one with the washing. Great to see the old sketch book pieces rewakened.

These are great, Gretel! I love them!!! I was staring at them for ages yesterday while I was at 'work' ('work' because it's not really - i was at my call centre job!) But yes, it was nice having lovely images to look at while I was there! ..please make some more before the weekend, so have more things to look at!

I think it's nice as can be to slip back into an early style -- it's amazing how early the dye is cast.

They are gorgeous, love that washing line and the bed, oh actually I think I love them all.

Gosh I remmeber doing simular things wiht black ink on hadn marbled paper! I have directed my neice to your site in the hope she may be inspired!!

I love that style - those images have such a lot of charm. I will definitely follow up your links.
By the way - are you an astrologer, too? (re your comment on my blog). Funnily enough, I do have a retrograde Jupiter on my IC at the moment - although I know Jupiter's not normally problematic.

I like the strong graphic quality of these and I echo everthing said here. Don't think of it as reverting back though, just as one of the many styles/genres you work in.

Do I see a little bit of Zille in the bed pictures?

Anyhow- wonderful- thanks for posting these!

They are so intrigueing pictures. Also I can't beleive how many blogs your involves in. Just how do you get the time !!

these are gorgeous, love the washing line!